It’s a hectic week at the Tearoom, so no new post today. Instead, a repeat of some Trailer Park Boys love, because I’ve been watching it all week, and because I’ll be seeing these boys’ live show tomorrow night.

Things will probably get greasy. 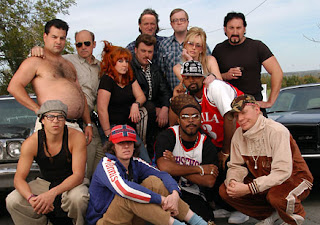 There are a shitload of good television comedies out there at the moment. Larry David continues to embarrass and amaze, the Thick of It’s cast take profanity to transcendent new levels while still plumbing the depths of powerful despair and I don’t give a damn what anybody else says – The Simpsons is still fucking funny.

But if I had to pick an absolute favourite comedy of the past few years, it would probably be Trailer Park Boys, because I never, ever get sick of watching that show. 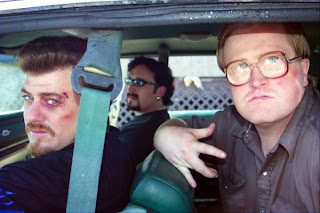 It’s just so greasy and so, so real. There are universal truths in this Canadian trailer park, along with some of the dumbest people on the planet. We’ve all known cats and dogs that are smarter than Corey and Trevor, but few that were as funny as these boys.

It’s dirty and messy, but it’s not just high definition piss jugs and rocket appliances, it’s also a never-ending drama revolving around Ricky’s efforts to win Lucy, Julian’s ability to have a drink in his hands (no matter what the circumstances) and Bubbles’ sheer good nature.

Outside of the main characters, there is a brilliant range of minor faces, all fabulously entertaining and horribly familiar. There is Cyrus' continued failure to prove he's a tough guy, Jim Lahey’s endless falling off the wagon and Phil Collins & Randy’s dirty burger bellies. There are people so greasy they have to be hosed down, because they leave marks on chairs they have been sitting in, and there are entire sub-cultures in the trailer park, like J-Rock’s dirty movies and white-trash raps. 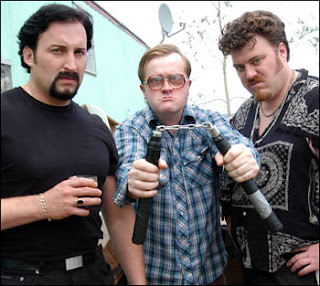 There is also something really clever and really, really funny about the fact that everyone in the park thinks Bubbles is the smartest man they know, mainly because it’s true. He might live in a shed, drive around in a go-kart and have glasses that are bigger than the moon, but he also sees all the angles and knows when a bad shitblizzard is going to hit the park.

Unless he is under the spell of an evil puppet, Bubbles is also a genuinely decent guy who never wants to hurt anybody – when his friends inevitably get into gunfights, he’s got their back, but always fires into the air so he can be sure nobody gets hurt.

There is also something really funny when people who have been drinking all day experience some sort of triumph, and storm off yelling “I’m going to get fucking drunk tonight!”, or when a dirty liquor and cheeseburger party gets out of control, or when characters figure that the only way to get their life back together is by growing dope through denial and error, and man, I never get sick of all that dodgy stuff.

It’s not only funny when they completely fail to be criminals, it’s also a laugh when they actually get away with it, because they’ll just lose their big score all over again. 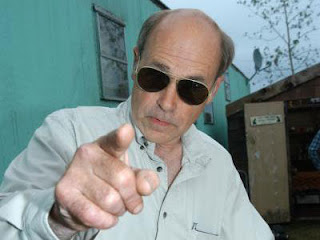 In seven years of television shows and a couple of movies, there has been an extraordinary amount of good material featuring these people who drift through life, getting stoned, having a few drinks. It’s no big deal, just as long as they’ve got the good fish sticks, not the cheap ones. The money from their dodgy deals comes and goes, and it doesn’t matter.

Despite this endless cycle of repetition, along with the fact that nobody ever learns anything, the series never felt tired, even after a decade of running around in circles. Part of this was due to the creators’ willingness to make things as ridiculous as possible, while still holding a tight grip on reality, and part of it was due to the genuine affection displayed for the characters.

They live in dumps, aren’t too bright and never really got the idea of concepts like the law, but they’re still loyal to each other, still try to do the right thing.

Even when it descends into gunplay or pants-less fights, there is no real harm done here. It’s just the way life in a Canadian trailer park goes down.

And for something that delights in the depths human stupidity can plummet to, it’s also a deceptively smart show. It relies on a surprisingly convoluted continuity, while also ensuring that any season can be watched in any order, and it will still make sense. The show drips with all kinds of irony and can sometimes go off in weird and unexpected directions, all done on a minuscule budget.

And it can also be remarkably sweet - these characters do steal and drink too much and get into all sorts of shenanigans, but they also genuinely care for each other. There is loyalty and real love within the gates of this park.

The last time the world got to see inside the Sunnyvale Trailer Park, the eternal war between our heroes and Jim Leahy had been won by the supervisor, who was off in paradise, getting drunk and sunburnt and passing out in the swimming pool. It’s unlikely to be the end of the road for the Trailer Park Boys, and they’ve even put on a live show since the movie, so it’s bound to come back, sooner or later. 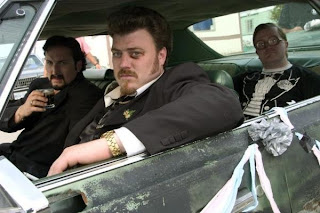 I’ll be waiting. I’ve never lived in a trailer park, (although I have relatives who did), but you don’t have to live this greasy lifestyle to make a connection. Trailer park people are just people, with all the same fears and desires as the rest of us.

They might not be able to pronounce jalapeño properly, or might spend a bit too much time at the Gentlemen’s Club, but it’s still a rich and rewarding experience to follow lives on the Sunnyvale side.

That show is just great. Watched every season, never gets old :)