There was nothing quite like a comic digest for delivering short, sharp doses of superhero fun, and I wish they still published them.

Back in the early eighties, reprints of old superhero comics were sometimes surprisingly hard to find. In the decade before, DC padded out super-sized issues with pages and pages of golden and silver age reprints,  and Marvel put out titles like Marvel Tales and Marvel Double feature and Marvel Triple Action and Marvel Collectors’ Items Classics and Marvel Action Spectacular Happy Hour, which helped remind everybody that the new guys weren’t as good as Kirby.

And then, in the 1980s, everybody was trying so hard to be modern and interesting and mature, and didn’t like being reminded of the embarrassing past too much. Marvel Tales carried on, but almost all the other Marvel superhero reprint material dried up. DC cut back its regular titles to smaller issues with all new content. There were odd special projects, or the rare book like Bring On The Bad Guys, or some weird little reprint paperback that suddenly shows up at the local supermarket, but the past was largely ignored.

There was no internet, or trade paperbacks, and even reference things like Who’s Who and The Official Awesome Handbook Of The Marvel Universe, or the terrible & incredibly informative Marvel Saga. I was just a kid at this time – in prime superhero mode – and this lack of access to the past used to drive me crazy.

But there were always The Best of DC: Blue Ribbon Digests, and I coveted each and every one of them. 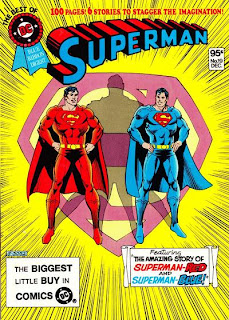 The digest format is little-used these days. With the exception of Archie Comics, who will probably put out digest comics about goofy teenagers until the heat death of the universe, none of the big comic publishers really touch them anymore.  There are occasional reprints of random things like Vampire Tales and Sgt Rock comics that are smaller than regular collections, but none of those tiny, chunky digests.

But for a good 18 months in the mid-eighties, the digest format was everywhere. It was particularly well-suited for cheap and easy reprints of easy reads like GI Joe and Transformers comics, which were hard to find at the time. (During a brief infatuation with GI Joe comics in 1988, the only way I got to see those early issues were in there shrunk-down collections.)

The digest is a convenient format for carrying around in the back pocket, and provide a huge amount of bang for their buck. But it’s also easy to see why the format died – while reproducing at half the size of the original comic can produce some startlingly detailed work, it can also lead to smudged, confusing artwork. They were still printed on paper that was one level above toilet paper, and tiny lettering could lead to severe eye strain. I still have an inexcusable fondness for the garish tones of flexographic printing, but attempts to use that on tiny digest comics resulted in some good comics reduced to terrible mush, thanks to severe colour bleeding and over-saturation.

So now nobody (except Archie) bothers with digest comics anymore, which is an awful shame, because I love the little buggers, especially The Best of DC Blue Ribbon Digests. 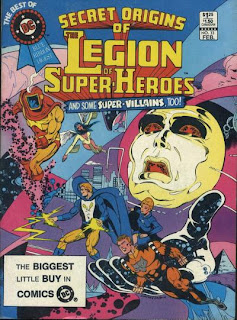 There were 71 of these digests published between 1979 and 1986, and I’ve only got 16 of them, but I’m always looking out for more. Each digest has dozens and dozens of pages of DC comic fun, with a heavy Bronze Age preference backed up with stories from all eras of DC’s past.

The variety of comics published in these tiny books was staggering. There were tonnes of Superman, and ‘Year’s Best’ things, but also Sugar & Spike, Batman, Plop, Legion of Super-heroes and Rudolph the Red Nosed Reindeer collections.

Even the endless Superman collections reprinted a large variety of stories, collected under certain themes, like Superman vs Luthor (#27), or Superman vs Kyptonite (#36), or Superman vs spooky shit (#38 - a personal favourite that still feels creepy). 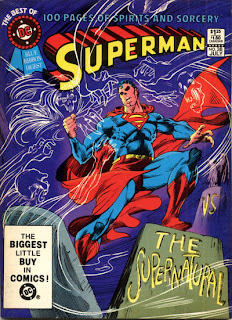 A sharp editorial eye produced a series of digests that, tiny lettering and dodgy printing aside, are still incredible readable and packed full of terrific stories. Take the Batman Family digest (#51) – it’s got the classic Daughter of The Demon and the brilliant Night of The Reaper by O’Neill and Adams, but it's got a while lot more.

There is also a long story from Batman Family #11-13 with great art by Don Newton and Marshall Rogers featuring Man-Bat, Robin and Batgirl going up against that dastardly Outsider (which includes a great bit where Alfred finally gets the chance to give this Outsider fellow a good biffing), and it also finds room for charming oddities like a Commissioner Gordon/Alfred team-up where the butler and the policeman get a surprise birthday party for Bruce Wayne ready. 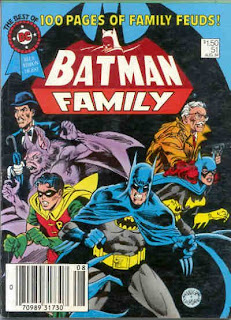 It wasn’t all a celebration of the past, even if it was the only place you could find that chunky Wayne Boring Superman. Some digests, like the New Teen Titans in #18 and the Legion of Super-Heroes in #24, included all-new ten page stories, and one of the most popular recurring features in the series were the Year’s Best digests.

These specials were all ‘148 prize-winning pages’ long, and stuffed full of the best DC could come up with at the time. They remain fascinating documents of the very last years of the Bronze Age – each has a super-charming Superman story, and there is always a Sgt Rock comic, because Easy Co’s short and sharp stories about man’s inhumanity to man were ideally suited for Best of Collections.

But they also have odd and offbeat stories featuring everyone from Green Lantern to Atari Force – and all of these comics are smart, clever and thoughtful to some degree. They show the first signs of a new quantum leap in superhero comics – it’s no coincidence that one of the last of the ‘Year’s Best Comic Stories’ books (#61) starts off with The Anatomy Lesson from Swamp Thing #21, and includes “Who Is Donna Troy’ from Teen Titans #38 – two comics that helped set the template for the next two decades of DC comics. 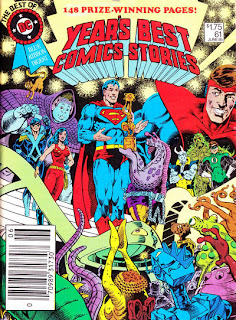 That was the first place I ever got to read the anatomy lesson, and even though Bissette and Totleben’s art is not well served by the format, it was still more than enough to blow my 12-year-old brain.

I adore these tiny digests, and wish I had more. Paradoxically, while they offer exceptional bang for buck, they were prohibitively expensive when they were brand new. I remember being crushed to discover that #66 – Superman Team-Up Action! – was $3.95 in 1986 NZ money, when most regular comics cost $1.03, so I had to get a Star Trek comic instead. (It was the first issue of the DC series where the Mirror Universe guys came back, and that was fucking awesome, so I did all right out of that decision.)

I never got to read that digest, and never actually bought one brand new. All of the ones I still own were bought in second hand bookstores over the years, and they’ve become incredibly scarce in recent years. A Jimmy Olsen digest I found in Dunedin last year was the first one I’d seen in a decade, and I haven’t seen any more since.

All my own digests are beaten to hell, which is probably why you don’t see them for sale much any more – these comics were made to be chucked about and treated badly. They all got lost or read to pieces.

But they also have those sturdy cardboard covers, and still hold together reasonably well, so I’ll still be looking out for more. This kind of dose of concentrated comic goodness is always welcome.

That digest was my first exposure to THE ANATOMY LESSON too, and I too never looked back.

I still have a pile of DC Digests in my collection, and the GI Joes and Transformers as well.

Gold Key also reprinted a lot of their horror series in digest, and they're pretty good -- worth tracking down a few.