Up on the walls 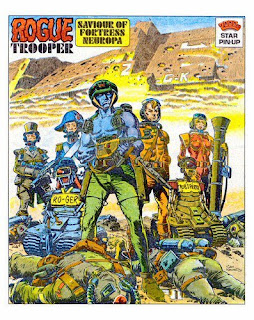 I was banned from putting up any posters or pin-ups on my bedroom walls for most of my teenage years, and for good cause too. I was only allowed to have things like Mum's creepy old angels painting hanging up there, because I destroyed the wallpaper at one of the rentals we were living in. I'd used sticky tape to cover one bedroom wall with 2000ad covers and pin-ups and all the wallpaper was ripped when it came down.

By the time I left home I was allowed the odd Nightmare on Elm Street or Spider-Man poster, but things got out of control in my first few flats in the mid-90s. I would cover every single inch of my bedrooms with posters, pin-ups, covers, trading cards and cool pictures cut out of a Previews comic catalogue.

Some flats, this mad collage of anything vaguely interesting from movies, TV or comics would spread out into the communal living areas, tainting the whole place with my rampart dorkiness. There would be bits from John Woo movies, or Vertigo mini-posters, or Withnail and I stills, or Batman comic covers, or endless Star Wars bullshit across those walls. The back of the bedroom door would host entire trading card collections, and the hallway was full of movie star pin-ups from some 1960s magazines I found at the op shop.

It dropped off after a couple of years - sometimes literally - because it was just too much fucking work, keeping all this shit up and under control, replacing the stuff that was bleached out by the sun, finding room for the gorgeous Eraserhead and Blade Runner posters that came with Empire magazine. In the end, there were fewer and fewer things on the walls, and by the time I moved in with the lovely wife 14 years ago, there was only the odd poster or two.

These days, the walls are full of tasteful art by our mates, and little paintings and prints that we picked up overseas. Some of the stuff that was part of the '90s collage - including some Ralph MacQuarrie prints and flyers for things like The Usual Suspects and Man Bites Dog went into the bin last week, and it was about time too, they were all getting a bit ragged.

But I wish I'd bothered to take a photo of the collage at its peak, when it overwhelmed the room and flat. It really was a remarkable sight, and the pinnacle of my nerdiness.
Posted by Bob Temuka at 2:56 PM