Rammstein in the rain 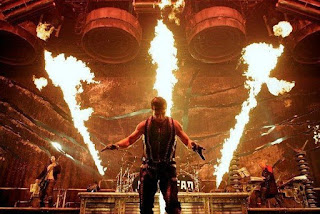 It was one of the last Big Day Out music festivals in Auckland, and we weren't that bothered about seeing Rammstein, but it had been a miserable rainy day, and we had time to kill until Iggy Pop came out, so why not?

And even though every song basically still sounds the same to me, they were magnificent. The stage show was off the charts, with so much fiery pyrotechnics that they literally burned the rain away. And, even though we were a good 30m away from the stage, our eyebrows as well.

Surprisingly, the wife got a bit obsessed with their Teutonic chunk after we saw their show, and got all their albums afterwards. I saw the flames, but I didn't see that coming.
Posted by Bob Temuka at 2:43 PM