When they killed off Superman in 1992, we all knew he wasn't going to stay dead for long. No matter how much DC pretended that it was totally for reals this time, it was only matter of time before Superman was back streaking across Metropolitan skies.

So when he did come back, mullet and all, it was business as usual, and he was off fighting for truth, justice and the American Way again. Millions of poor nameless souls had to die in the apocalyptic inferno of Coast City to get Superman back up and running, but comics' greatest and most iconic superhero was alive.

But that mega-selling storyline did manage to kill off something for good, because the Superman comics after his resurrection inevitably got blander as they got more popular, and they never really managed to recapture the surprisingly sweet and smart Superman comics that preceded it. 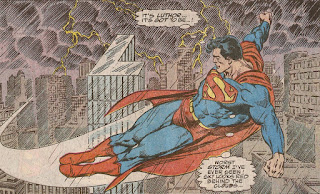 The run of Superman comics that led up to the character's temporary demise are largely forgotten now, with a long-lost continuity full of events that never happened, according to current DC lore (although they somehow managed to make the whole death storyline stick). They don't count, or matter, anymore.

But it remains an interesting little chapter in the character's history. It had been half a decade since John Byrne and chums had restarted the character in a blaze of post-Crisis publicity, and the character's titles had grown after early stumbling efforts to make the character relevant for a jaded eighties audience.

The Super-creators dealt with this issue by doubling down on the soap opera aspects of Superman and his large supporting cast. With four titles – Superman, Adventures of Superman, Superman: The Man Of Steel and good old Action Comics – they essentially turned Superman into a weekly title, with a new Super-title appearing on the shelves every seven days. 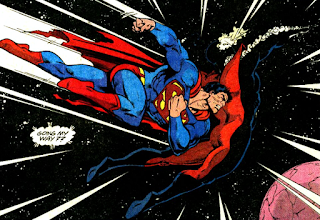 Despite DC's difficulties in creating a weekly comic – the recent Action Comics Weekly serial didn't even last a year – the weekly Super-titles actually held together pretty well, especially when you could easily follow the order with big, friendly triangle numbering on the covers.

There was some real confidence in the storytelling, in both script and art, with multiple plots being juggled at once, and a constant raising of the stakes. Superman would lose his powers for a month or two, or bugger off into outer space for a sci-fi epic when the going got too rough. Clark Kent would finally propose to Lois, and then had to at long last reveal his true identity to her. He would disappear into time, and fight his way home again.

It was probably necessary to get all four titles to get the full story, but it was also possible to follow just one or two of the titles. They regularly crossed over, but they also had different focuses on different aspects of Superman's adventures. Some of them were more about his personal life, some of them were balls-out action, and some of them were about his large cast of characters, from Lex Luthor to the Daily Planet crew 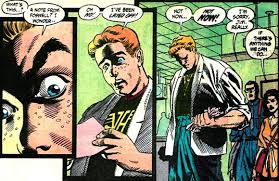 It helped that each book had its own distinctive art team – Dan Jurgens's art sometimes looked like he'd cut out and pasted each individual character onto the page, but he had a pleasingly simple line that offered maximum clarity; Tom Grummet's art on Adventures was just as clear, with a slightly sharper line; Jackson Guice's Action art was full of stilted action and outstanding emotion, and Jon Bogdanove's art was the most Jon Bogdanove art ever.

These differences meant it was possible to just get one or two of the titles, and you didn't have to worry about the rest. There were inevitable moments where the reader would be left behind by an incident that happened somewhere else, but the tenant of maximum storytelling clarity meant it was totally possible to get by, without having to buy every single super-title.

I know it was possible, because I got hooked on Superman comics a full year before the Death storyline, and was amazed by how slick the Super-world has become.

I was only about 16 at the time, and had been a predominantly Marvel kid for the past few years, high on X-angst and New Warrior awesomeness (although there was always, always room for some Batman). I'd been vaguely interested in Superman over the years since the reboot, and was just as excited by Byrne's vision as anybody else, but had drifted away from DC.

And it was a combination of late Justice League International and new Superman comics that got me, and the crowd scene in the Panic In The Sky storyline in particular. Those scenes where ALL the DC heroes gather to fight back against some monstrous threat were a staple of the big crossovers, and were always a great snapshot of the current universe. The one in Superman #65 was an intriguing introduction to the latest generation of heroes.

And that was it, I fell hard for the Superman comics. The character wasn't over-powered, and you really got a feel for the daily life of the world's biggets superhero. The comics had neat cliffhangers, were full of inventive new characters and churned through the stories. There was an invigorating pace to the whole exercise, and while I could only get half of them in my part of the world, that was enough. 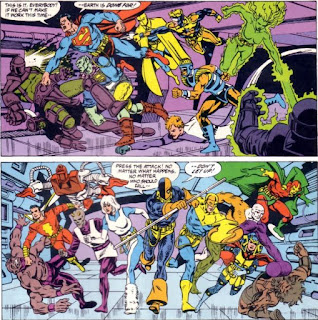 Of course, this honeymoon period lasted about a year before Superman died, which was a big damn deal at the time. There was lots of drama leading up to the big fight, with a long, slow and ominous build-up, and then it was all on, and Superman comics suddenly started selling mega-tons of copies as his final battle began.

It was inevitably disappointing on a story level, turning into a straight-up slugfest, but awfully exciting as spectacle, with each issue counting down to the final blow, the number of panels on the page reducing to the all-splash page spectacle of Superman #75.

There was no doubt where the story was going in the lead-up to the death, everybody knew it was coming, but there was a great unpredictability to the aftermath. With Superman entombed and the world moving on, anything could happen to the titles. 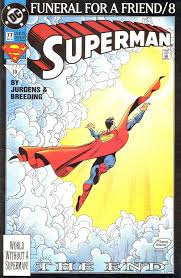 What happened was Reign of the Supermen, a massive storyline of new hope, super-powered imposters and galactic revenge. The drama, mystery and action was sustained for a good few months, and Superman was restored to life. As his death loomed, it looked like nothing would ever be the same again, but it was business as usual fairly quickly.

The merits of the whole storyline could be argued on thematic levels, but it was an unqualified success in the sales charts. Unfortunately, rather than being seen for the freakish one-off sales event that it was, there was an instant expectation for the Super-books to maintain that momentum, and it didn't take long for the wheels to get wobbly as the creative teams buckled under the pressure.

The push for bigger and bigger storylines, combined with an increased editorial scrutiny that stifled individual creativity, resulted in blander stories and art, and the magic was gone.

Efforts to keep the interest up by killing off the Clark Kent identity, or destroying Metropolis, or turning Superman into a bright blue electro-punk nightmare just showed how well the earlier stories had maintained the balance of the epic and the emotional, a balance that was hopelessly lost. 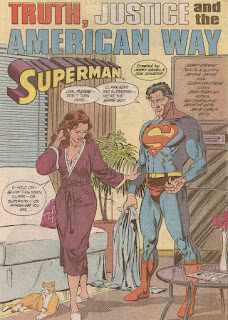 With those usual difficulties in getting every issue when you're living on the arse end of the world, it took me several years to get all the chapters of the death and resurrection storyline, and I was soon burned out by the Super-books. They'd helped respark another interest in the vast DC Universe, but I'd moved on. I tried the Super-titles again for a few weeks in the late nineties, but it just wasn't the same and that was it. Apart from the odd Morrison-written saga, I haven't bought a regular Superman comic since 1998.

Fortunately, that crazy weekly schedule means there is still a buttload of issues I missed the first time around, and I still happily get the odd back issue, and it's been a pleasure to fill in those gaps, and see how some of those stories worked out. Superman comics are a lot harder to create than they look, and the team that told his adventures leading up to his greatest battle did a fine job.
Posted by Bob Temuka at 6:05 PM