Once upon a time, when I was young, dumb and knew it all, I would loudly proclaim that the most important component of any great comic book was the script. The writing was the thing. Everybody knew that.

So I found it easy to overlook some awful art on some terrific stories, and knew a strong script with weak art was always more interesting than a weak script with strong art. There were always plenty of beautiful collaborations between equally talented creators, and a whole bunch of sexy writer/artists out there, but I was always more interested in the words than the pictures.

Now I'm an old fuck, and I've gone all over to the other side, and I can't stand any kind of comic with lousy art, no matter how good the script was. I found my limit, and that limit was Avatar comics. 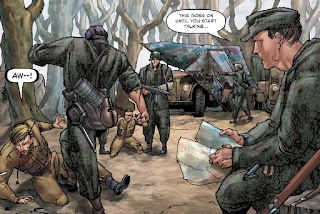 There are two comics that Avatar currently publish, both written by two of my favourite authors. The scripts are as strong as they have ever been, with solid characterisations and complex plotting. They're both clever and humanistic stories.

And they both feature bog-awful art that feels like some motherfucker is rubbing sandpaper on my eyes, and I just can't get past it. 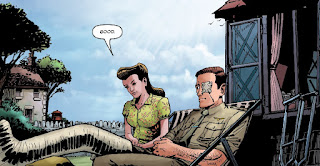 The first is the latest volume of Garth Ennis' War Stories, with the writer continuing to produce some of his most heartfelt and raw stories of pointless conflict. It's a series that is obviously close to Ennis' heart, and he has now told a couple of dozen stories of bravery, cowardice, strength, honour, atrocity and tragic pointlessness, through several different publishers.

And when the series was first launched by Vertigo, sometime in the very late nineties, they had the advantage of being bloody beautiful, with masters like Dave Gibbons, Cam Kennedy, Dave Lloyd, Dave Gibbons and the mighty Carlos Ezquerra. They were incredibly good looking comics, giving a strong visual element to these stories of war.

That lasted two volumes, and then the series came back under Dynamite, under the 'Battlefields' banner, and while Ezquerra was still there, the other artists of a slightly lesser calibre. There was still some solid stuff from the likes of Russ Braun  and Peter Snejbjerg telling new and angry stories of night witches and long-forgotten atrocities, and while they weren't as good to look at as the earlier volumes, they were still more than good enough.

And now they're published by Avatar, and the great thing about that is that they are more regular than ever, with ongoing monthly installments of combat horror. But when they come out looking like the comic equivalent of Sunday morning hangover puke, more isn't necessarily better. 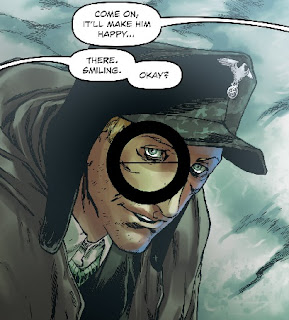 The scope of the War Stories comics has grown under the Avatar logo, and the stories have been set in unexpected worlds. Even with thousands upon thousands of war comics over the past half century, it is still a new thrill to see stories set during the Six Day War, or ones that getting into political arguments about Irish soldiers fighting England's war.

But the flip side to this kind of creative freedom and specialisation is that it doesn't always attract the biggest audience, and the lower sales leads to cheaper artists to stay alive, and the results are some terrible looking comics.

Under godawful and painfully insensitive 'good girl' covers, the figure-work is shapeless and ugly. There is no weight or form, and no energy or enthusiasm. Giant tank battles are reduced to inconsequential mush by weak lines, and moments of high emotion land with a dull thud. It's like getting a local community theatre group to star in your epic. I've been enjoying the War Stories from the start, but not when they are this slapdash, and may have to give it up.

The other Avatar comic that I almost like, but can't get past the art, is Alan Moore's Providence.

Despite a long and deep admiration for Moore's comics, I was admittedly less enthused with the whole idea behind Providence – the really appealing and eternal aspects of Lovecraft's stories are his ideas of enormous and vast horror from beyond the veil, and not his plots and characters. When it comes to Lovecraft, the devil really isn't in the details.

But it's a big serious comic by a big serious writer, and the first few issues have proven to be beautifully intricate and complex, but that's the only beautiful thing about it. Jacen Burrows art is – as usual - so flat, so dry, and so weak, it leeches away any goodwill from the comic. Just as Neonomicon felt like a big pool of nothing, this weakness leaves me with no feelings towards Providence at all.

Now, if it had somebody like Mike Mignola on art duties, it probably would be my favourite comic of the year. Hell, if it had one of the artists regular used on Mignola's little universe – the strongest roster of artists in mainstream comics – it could be great. But it doesn't. It has the usual Avatar rubbish.

Avatar has been around for a while now as a publisher, and it obviously have some fans who dig its various works. The company consistently take things to extremes, with a go-hard-or-go-home philosophy I can only endorse.

They do attract more fine writers than just Moore and Ennis, with scripts from the likes of Kieron Gillen,  Jamie Delano and Warren Ellis, which are big on high concept and outrageousness, but have the same clumsy, stilted art as every other goddamn Avatar comic.

Right across the board, the Avatar comics are as ugly as sin to my eyes. It prides itself on its uncompromising horror, but the real horror is in the presentation. The entire art direction of the publisher baffles me, because it just look so cheap and nasty. And not in a good way.

Because life is too short to waste on nasty comics, so I didn't bother with Providence past the first two issues, waiting for the inevitable collection to show up at the library, and I don't think War Stories will last much longer.

I'd rather spend my time loading up on fancy art books that focus on favourite creators, and any weird sketchbook collection, because sometimes I don't even need the story any more. I can just look at beautiful art all I want, without having to worry about the ugly.
Posted by Bob Temuka at 5:07 PM

It's a tricky one. I suspect the market has shrunk a great deal since the days of Ennis' (excellent) original run of War Comics and I think it's great that such a small market still offers ANYWHERE for creators with uncompromising visions. I gather the art page rates are very low to a point where the artists are forced to take a lot of shortcuts.
Personally I'll keep buying them. I think a good story can easily survive bad art and will continue to read pretty much anything Moore does even though I have no real interest in Lovecraft. I also thought his run on Crossed was the best comic he's done in a while and that even had relatively good art.

I felt exactly as you do about Jacen Burrows's art in Neonomicon, so flat and uniformly lit that monster sex abuse in a cellar was as thrilling as office politics, but I've been persuaded otherwise by Providence. The meticulous detail without any sense of place and the daylight horror go along well with Moore's tone and the protagonist seemingly unaware of the undertones of everything around him. Only clicked for me with the third issue, but I'm thoroughly enjoying it.