It's easy to sneer in hindsight, but I cannot overestimate how tremendously exciting it was to be a 16-year-old comic book reader in 1991. I was getting my first pay cheques, and with more disposable income than any point in my life, all I wanted to do was buy comic books.

The world of more alternative comics was just opening up for me, but there was still a huge affection for the X-Men and all of its spin-offs, and they were all relaunching in new, shiny and modern versions, with top artists like Lee and Liefeld and Portacio. The future looked bright.

It wasn't that bright. It was a bit shit. Uncanny X-Men was awful from the first issue, Jim Lee lasted a good five months before clearly not giving a damn anymore, and everybody on the planet suddenly realised how terrible Liefeld's art was in the gap between X-Force #1 and #2. Peter David's X-Factor scripts were awfully clever, but the crazy Larry Stroman art took some adjusting to.

Only one of those big relaunches of the X-titles really met those early hopes and expectations, and only one of them exceeded them. And it was Alan bloody Davis again, doing strange and wonderful things in the pages of Excalibur. 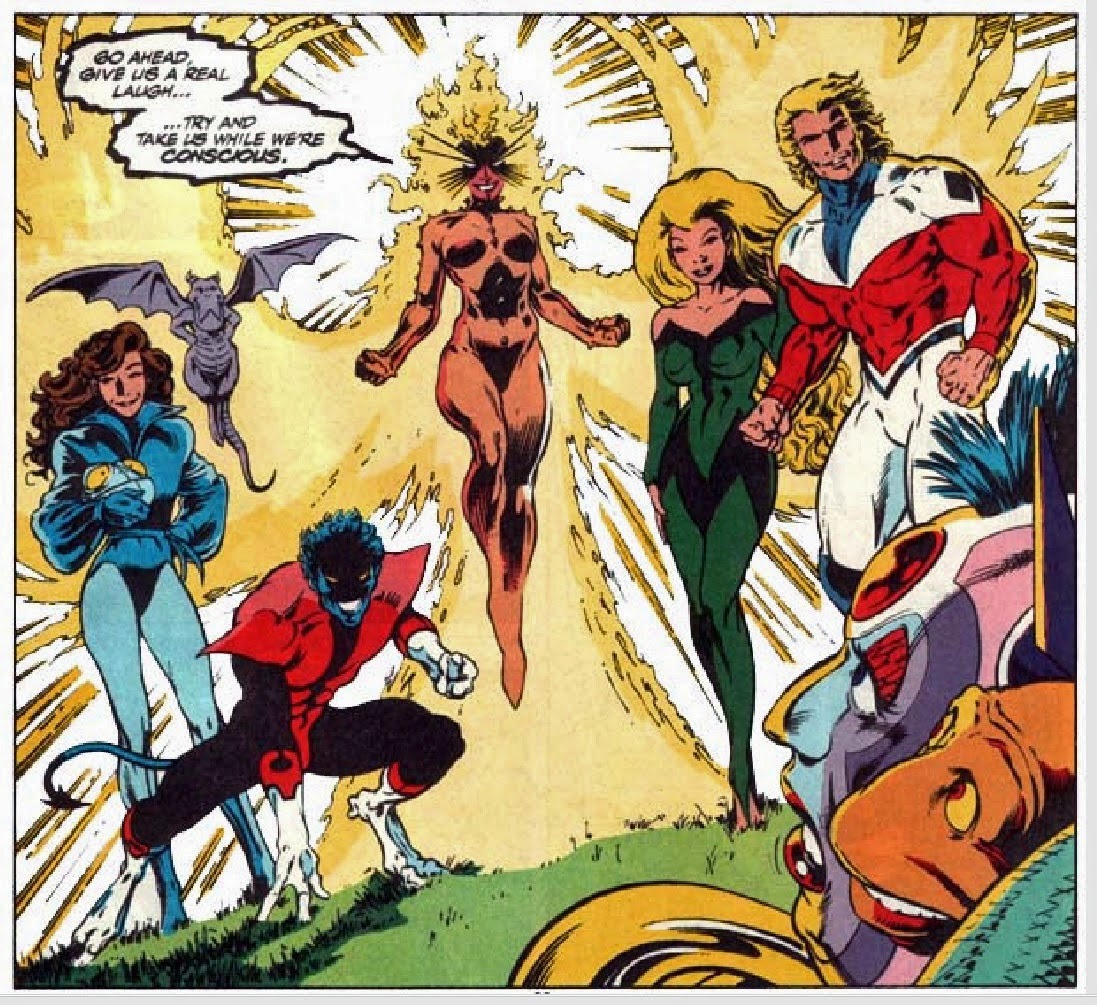 Davis returned as the regular writer and artist on Excalibur in late 1991, with a specific mandate to breathe some life back into the team, and tie up some of those damned subplots that Claremont had started simmering, and then wandered off and let evaporate.

The most obvious benefit of all this was the return of the artist. The large number of fill-in artists had not been up to scratch, but Davis' art was glossier and slicker than the Neary years, with a new polish and shine from Mark Farmer.

Those eternal flowing curves of Davis in these days are still a delight, bedded down in years of storytelling experience. His characters were as graceful as ever, his world-building was unparalleled, and there was dynamic power in his action scenes. 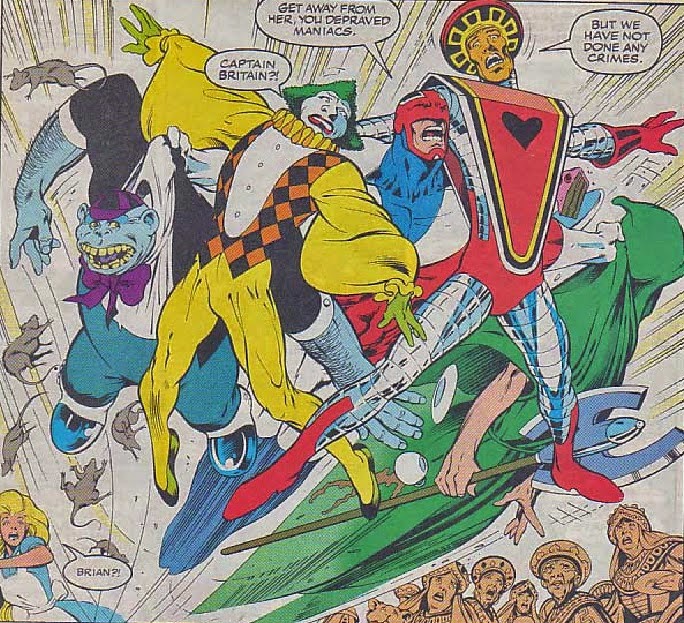 And as writer, he still had that healthy sense of humour that Claremont had brought out in the book. This wasn't a team of psychopaths with cyborg limbs and big fucking guns, this was a goofier world of fairy tales and science fiction insanity. Things in mainstream comics had only got grimmer out there in the nineties, as everybody tired so hard to show how serious they were, but that just made Excalibur all the more unique.

Thankfully, Davis still had that comic timing, and the freedom that came with the writing duties meant he could spend entire issues leading up to silly jokes, or he could kick off his run with the team facing the dire menace of 'Hard Boiled Henry', a suicidal chicken that does, admittedly, manage to destroy the team's base/home. 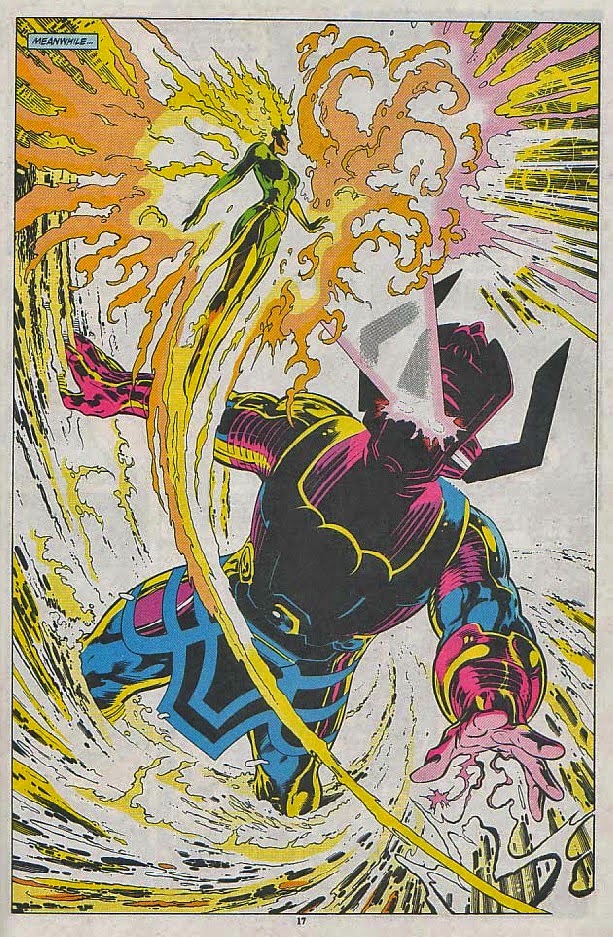 Davis also proved adept at tying all those bloody loose ends that Claremont had left lying around. Freely conceding that he had no idea what Claremont had planned for all this, David made it look like there had been a plan all along, with Colin The Barbarian sorting out a dangling thread from #2, the final (probably) confrontation with Sat-Yr-9 and the mystery of Widget all laid bare.

You can almost see the sweat from Davis' brow falling onto the published page in his first year as writer, getting the dialogue just right and keeping the story flowing with a huge cast of heroes, aliens and other beautiful freaks, but his ability to maintain a tone of complicated joviality was almost effortless, and some of his resolutions to these plot conundrums were inspired.

He even finished off the whole Days of Future Past thing with a long delayed win for the good guys, courtesy of some of Marvel UK's most embarrassing characters. Nobody has really noticed since, but that just makes it all the more charming.

There were still a few fill-in comics during Davis' run, issues that only made his pages look all the sexier, but he still lasted until mid-1993 on the title, and got some good stories out of his system. He also, crucially, left the team in a very different place than where he had found it – it was still Brian and Meggan and Kurt and Rachel and Kitty - but they were in a new home, with new friends, facing new adventures.

There were a couple of interesting Excalibur comics after Davis left, but they quickly dumped all that goofy shit. Warren Ellis' issues have a bit of bite to them, but are full of ideas that he would better explore in Authority and Planetary, and the comic eventually faded away, with the main characters heading back to other teams with varying degrees of success, and the more original creations fading into into limbo.

There was a fairly recent catch up with the classic Excalibur crew in Davis' most recent ClanDestine comic in 2008, with the Cross-Time Caper era crew showing up to save the day, and it was one nice little coda to the Excalibur story. 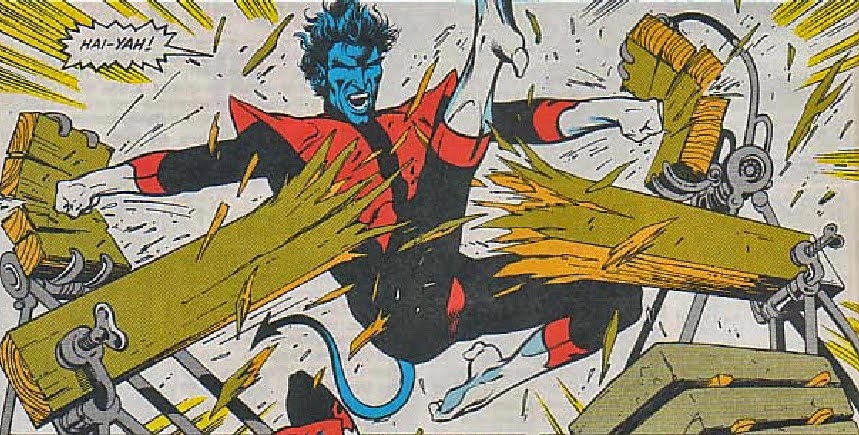 Those Davis issues were the second high water mark of the series, after its impressive debut. And while he lasted a couple of years, that era always seemed a lot longer to me personally, because it actually took me years to find those damn comics.

In between the Davis eras, Excalibur disappeared from all the bookstores and corner dairies where I lived, and was only available at comic books shop, and I loved hundreds of kilometres away from the nearest shop. So I was forced to hunt them out, and fill out the story, in total piece-meal fashion.

It was easy enough to do, when each issue was a slice of shiny and comfortable brilliance. Each issue I could find - and it could be months and months, and even years, before I found them - was cherished and valued. 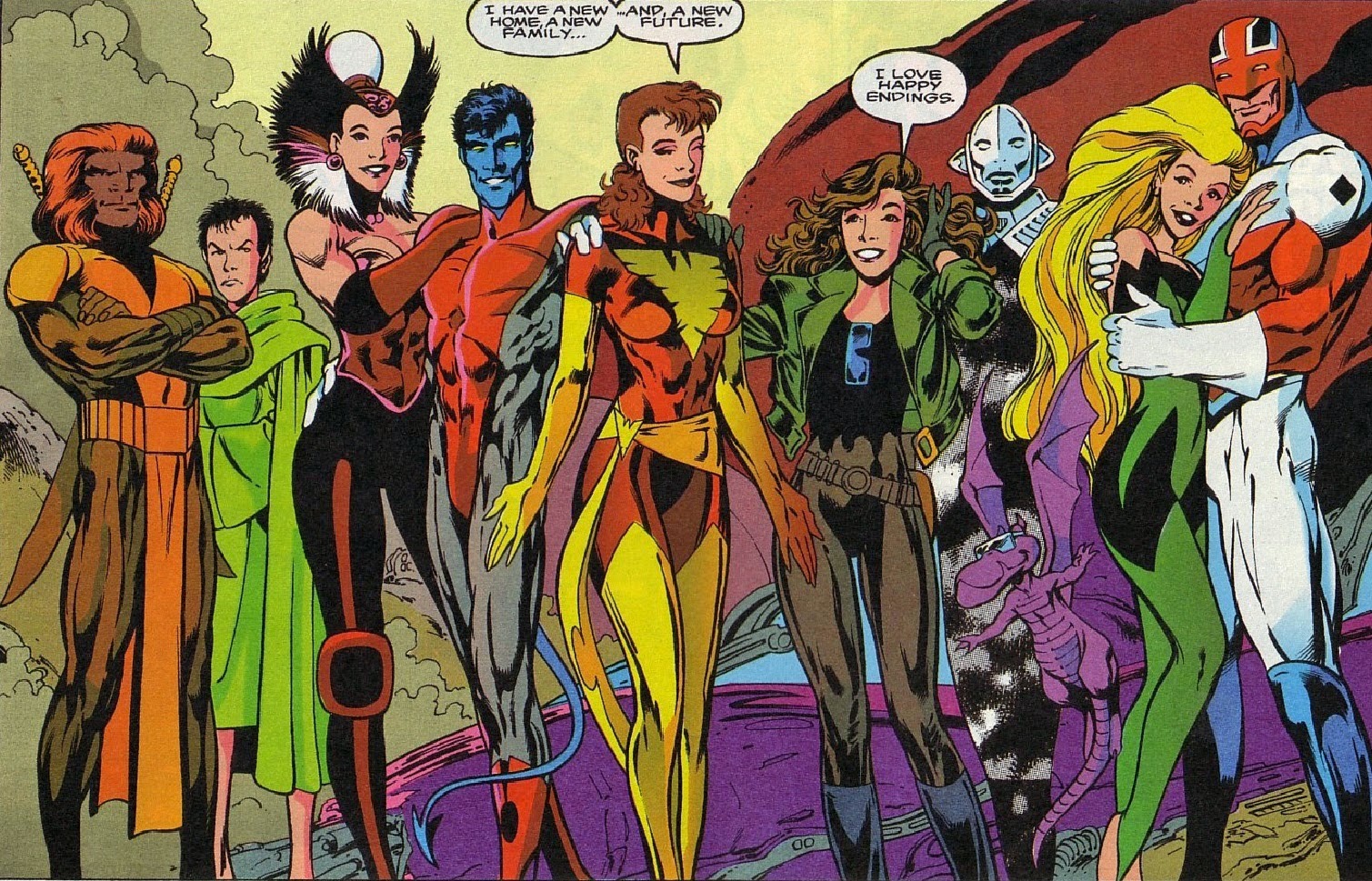 It was such a happy hunt, because these issues of Excalibur were the last superhero comics I was really, properly obsessed with - excited about the latest developments and absolutely desperate to read the next issue.

I'd soon be moving on to fascinations with the Los Bros Hernandez and the like, and I still love superhero comics, but I'll never love them as much as when I was a kid, and I'll never love them quite as much as I loved this last run of Excalibur fun. It's a wonderful end to a childhood of super hero comics, and one wonderful last grand adventure.
Posted by Bob Temuka at 6:29 PM