It's very rare, but every now and then, an artist working in a specific genre will be so strong, and so powerful, that they'll change that genre forever. Nothing will ever be the same after them.

In modern comic books, the most obvious examples are people like Jack Kirby, who brought dynamism and energy to the comic page – his work still crackles with power, all these years later; or Osamu Tezuka and his extraordinary impact on the entire look and pace of Japanese comics.

And in the world of fantasy, and sword and sorcery, there is only one obvious candidate for the artist with the greatest impact, and that's Frank Frazetta, because you can see it when you look at what he did to Conan. 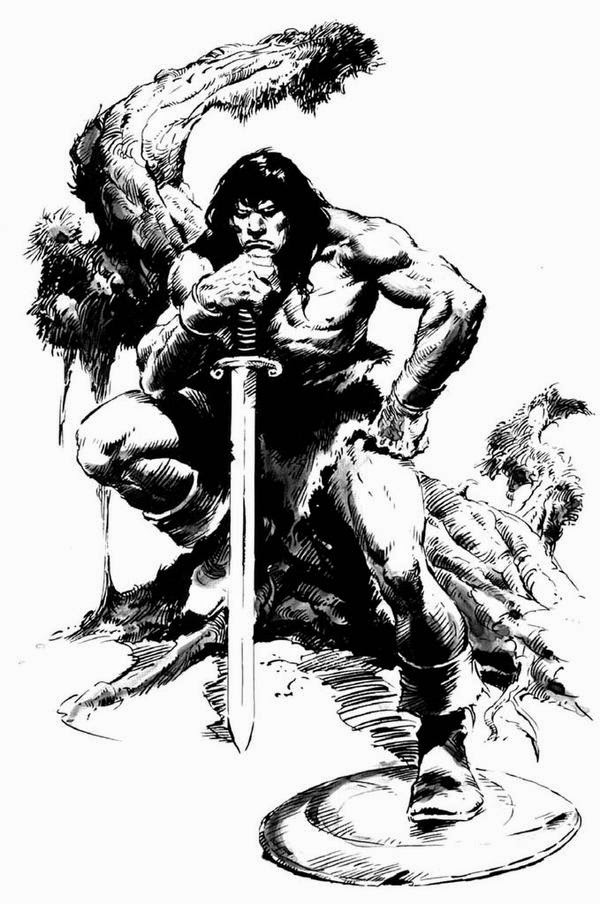 The picture above - courtesy of the almighty John Buscema - is one of a typical Conan, easily recognisable as the world's most famous barbarian. That long, dark hair hair, the barrel chest with muscles upon muscles, the fur loincloth and boots, the flat face, the bloody big sword – it could be nobody else. Accept no imitations.

But Conan didn't always look like this. For the first few decades of publication after the 1930s, there really wasn't a definitive Conan. Sometimes he looked like a lean bloke with a sharp haircut in a loincloth- 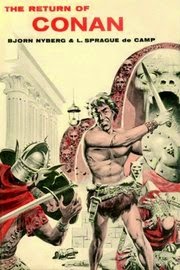 - and sometimes he just wore a sack - 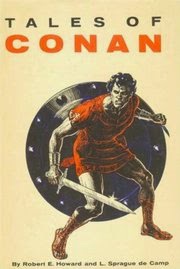 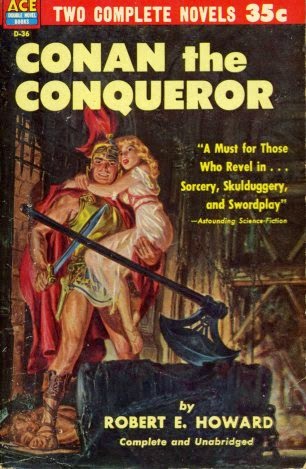 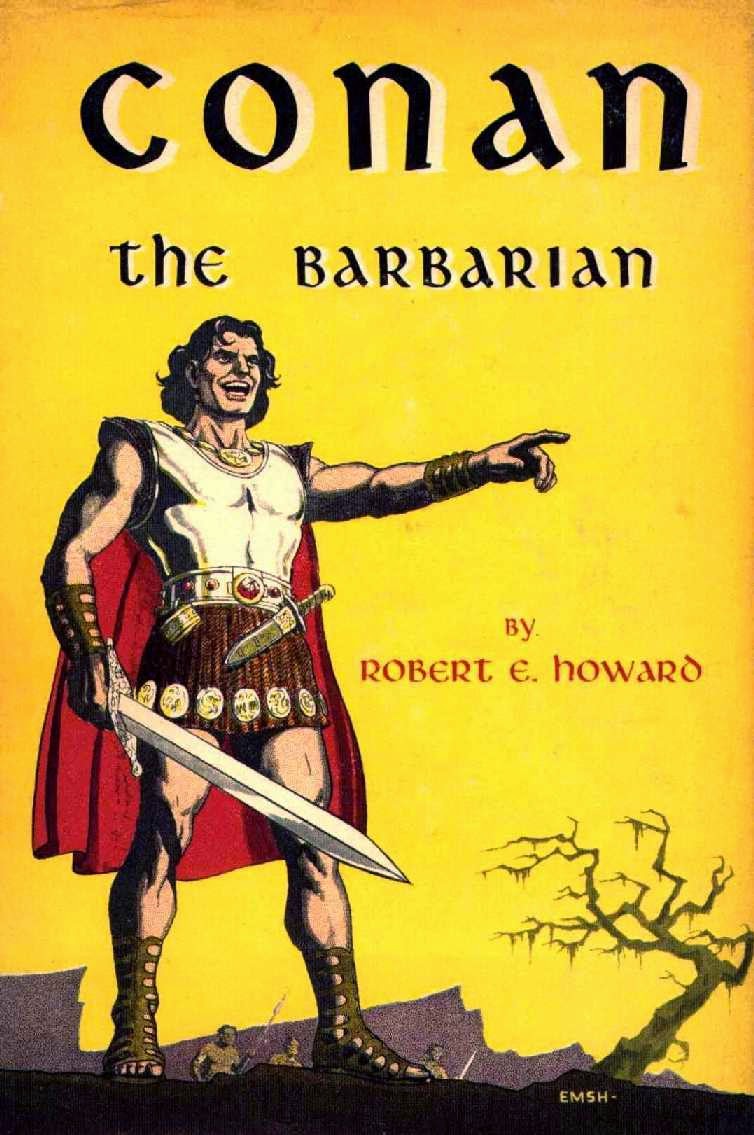 - and sometimes he just looked like a crazy drunk - 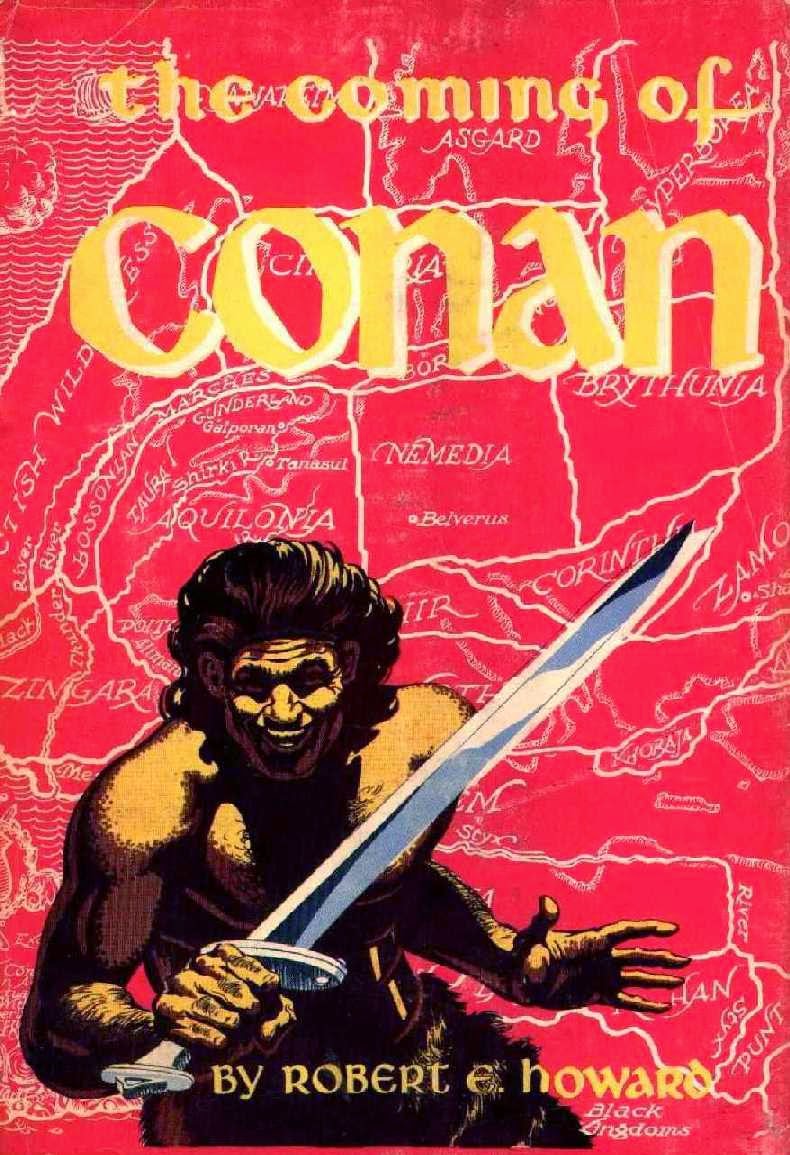 Conan stories were still reasonably popular over the years, with a large audience, but not a spectacular one. That all changed, and it can be argued all art fantasy changed, when somebody had the bright idea of getting Frank Frazetta to do this cover for a new paperback edition of Conan The Adventurer in 1966: 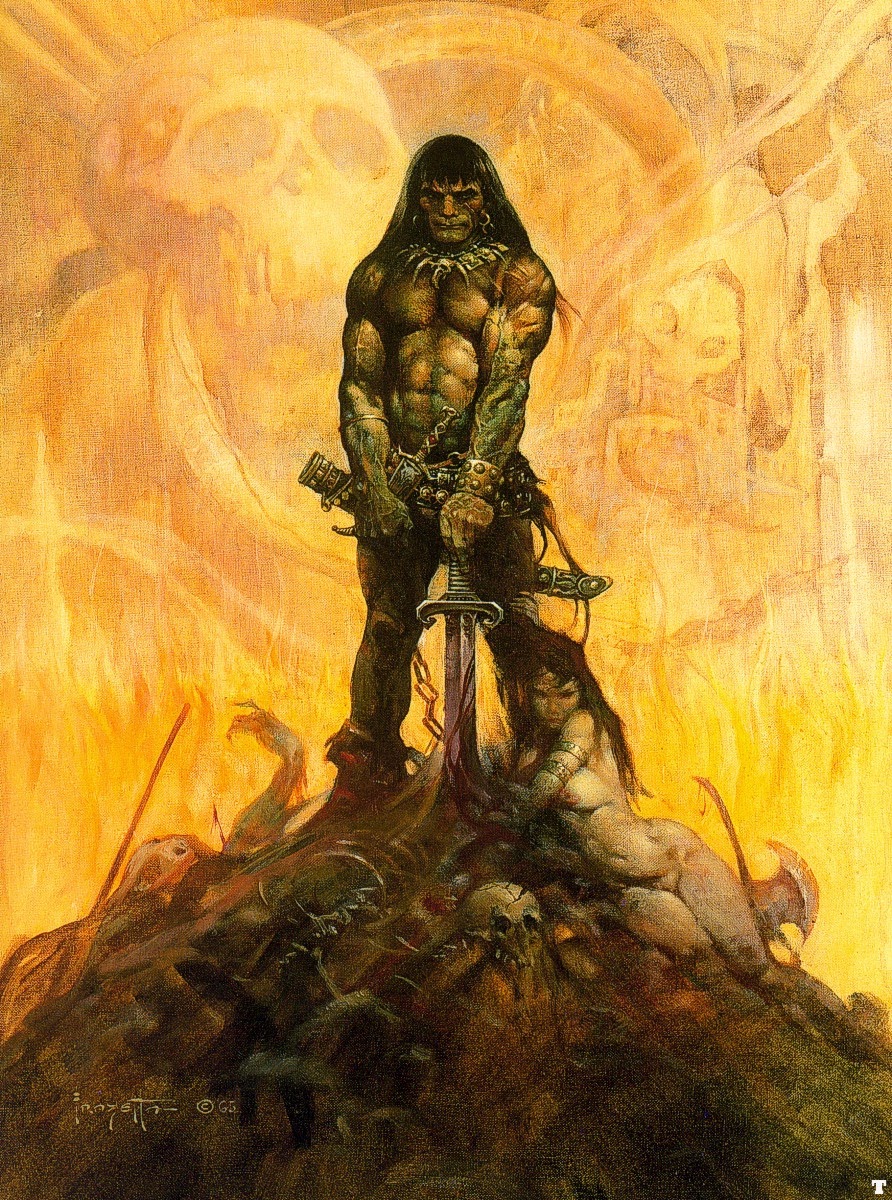 That's the Conan we all know. It's the Conan who will star in a thousand comic stories, and several movies. He's the dealer of death, brooding and blunt, ruling his savage world with brute force, an empire built on a foundation of massive carnage.

Frazetta changed everything with this one image, but he wasn't done yet. He continued to produce astonishing art like this - 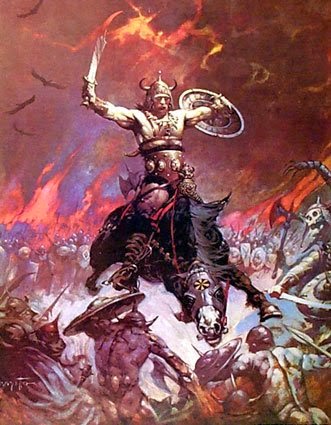 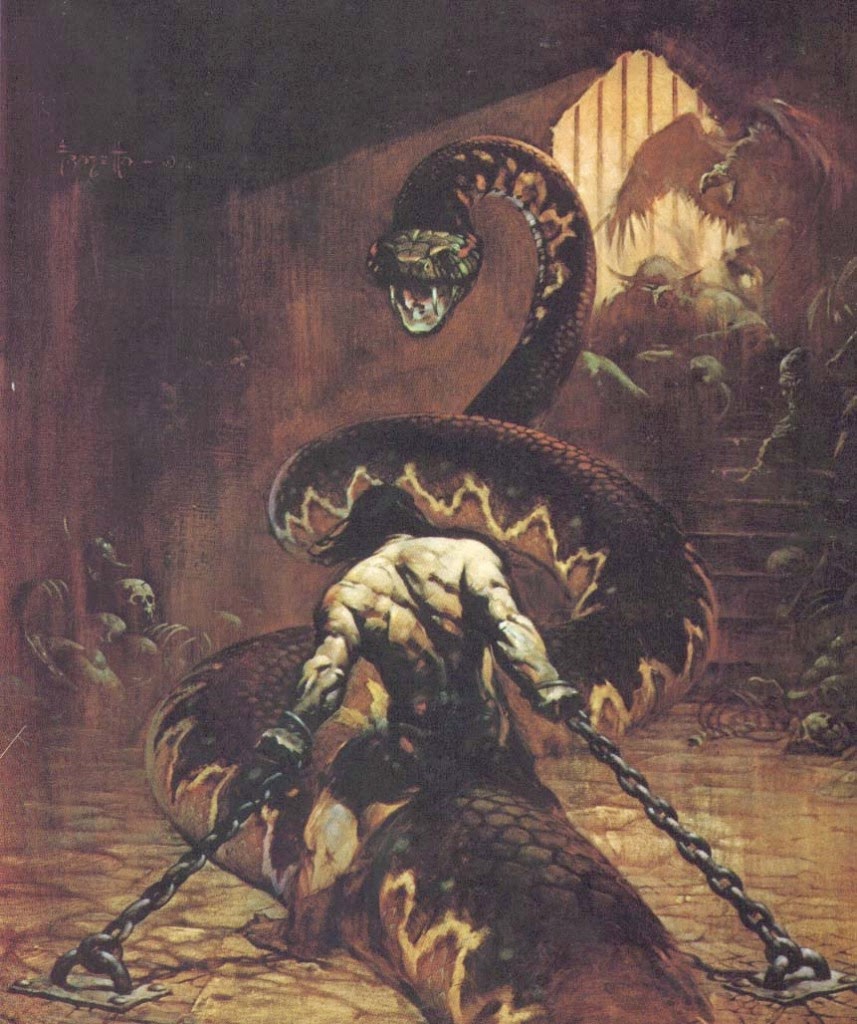 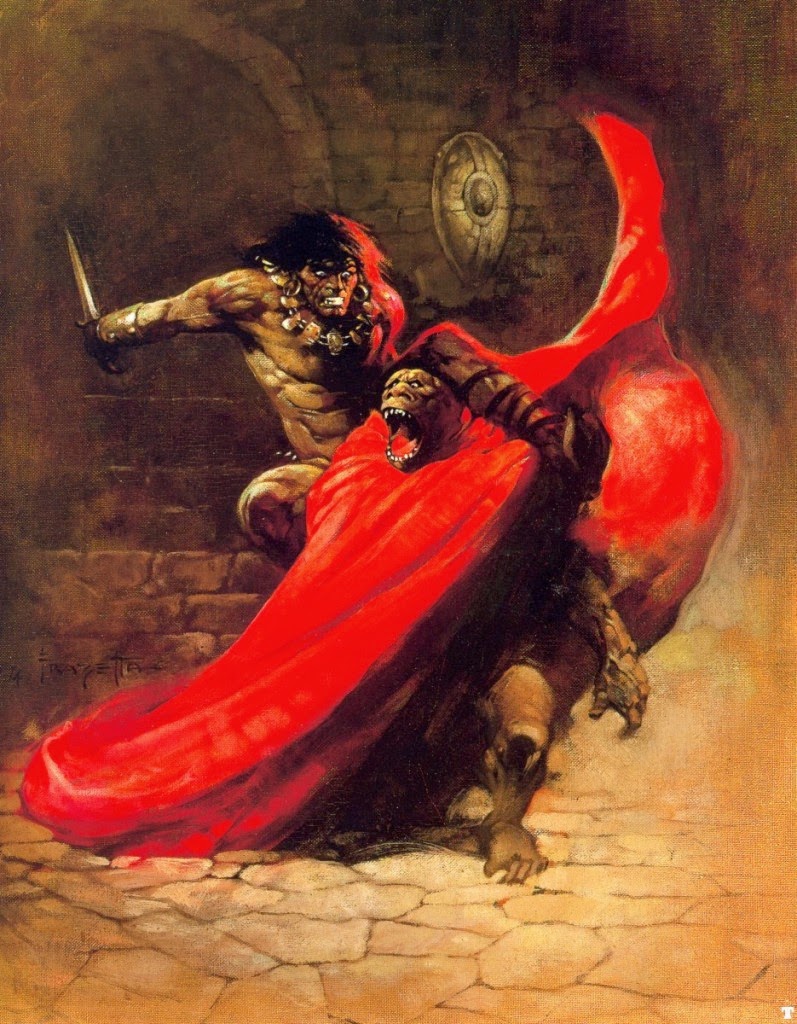 Despite a long history of fantastic fantasy art, the genre had never seen art this powerful or graceful. His years spent on adventure comics starring the Shining Knight and Ghost Rider - combined with the flow of cartoon silliness he picked up doing Li'l Abner with Al Capp - had given him the basics of telling a whole story within the confines of a single image.

And with Conan, Frazetta let his id run free, creating all these wonderful paintings. Crucially, he also ignored all perceived wisdom on what a good fantasy cover should have, and broke the goddamn mold.

After all, look at this one, my own personal favorite of all his Conan work: 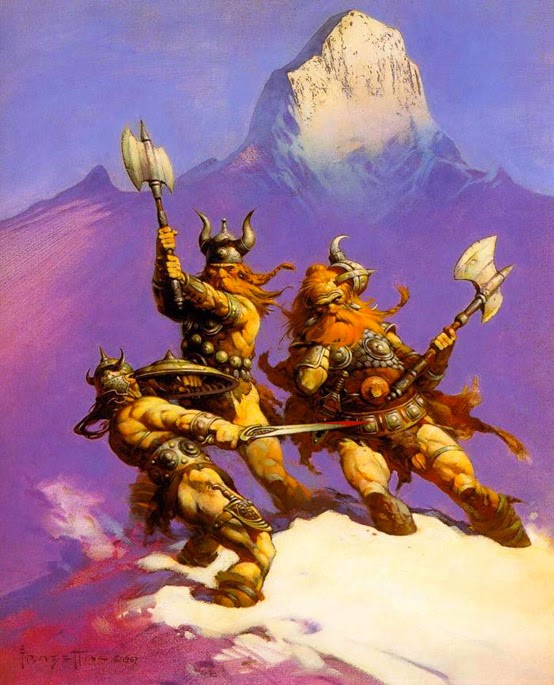 It's a strange little snapshot of action, all the characters are moving in odd directions, and the main character has his back to you. But it's a fucking spectacular picture, largely because of these idiosyncratic aspects. Each character is flowing around the other, with a graceful clumsiness, under unnatural lights. They're not posing, they're trying to kill the shit out of each other.

This art ended up on a million bedroom walls, and inspired a thousand other imitators, but also changed the entire look of Conan. The character and world we see in the Conan movies are a Frazetta world. The Lord of the Rings films, while designed by the stately likes of Alan Lee and John Howe, also have a driving dirtiness to them that owes a huge debt to Frazetta. 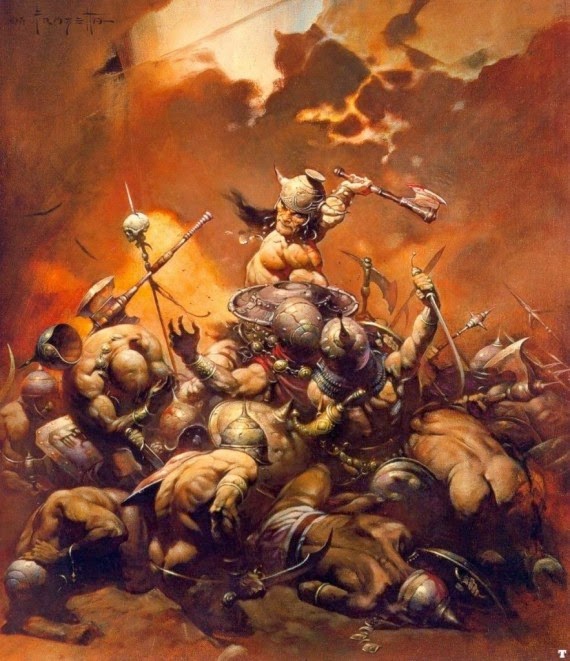 I'm not a huge fan of Conan comics - they're often dull, plodding and humourless, and there are only three female characters in the entire Hyborian world who aren't a damsel in distress or a monster in disguise.

But the images can still be powerful, even with the dodgy words. When somebody like Frank Frazetta comes along and changes everything, everyone had to follow, and it's a path that leads to savage beauty.
Posted by Bob Temuka at 6:58 PM