Excalibur by Claremont, Davis & Neary - The Sword is Drawn


For all the misery he heaped upon his favourite creations in the X-Men, Chris Claremont also had a marvellous sense of whimsy. He ruled all things X for years in the seventies and eighties, and often pushed things deep into grim and gritty territory, but he also had a wicked sense of humour, a penchant for fairy tales, and enough creative clout to do what he wanted.

Still, even with goofy interludes in the main X-Men title and crazy annual adventures, the X-Men, don't always offer the best platform for laffs when its persecuted heroes were fighting for their lives. Nightcrawler might have launched into battle with a grin, but Wolverine's sullen scowl was the predominant emotional beat.

And then, in the very late eighties, somebody noticed there were a bunch of groovy X-Men characters who weren't doing anything, and gave Claremont total license to go crazy with them, and Excalibur was born. 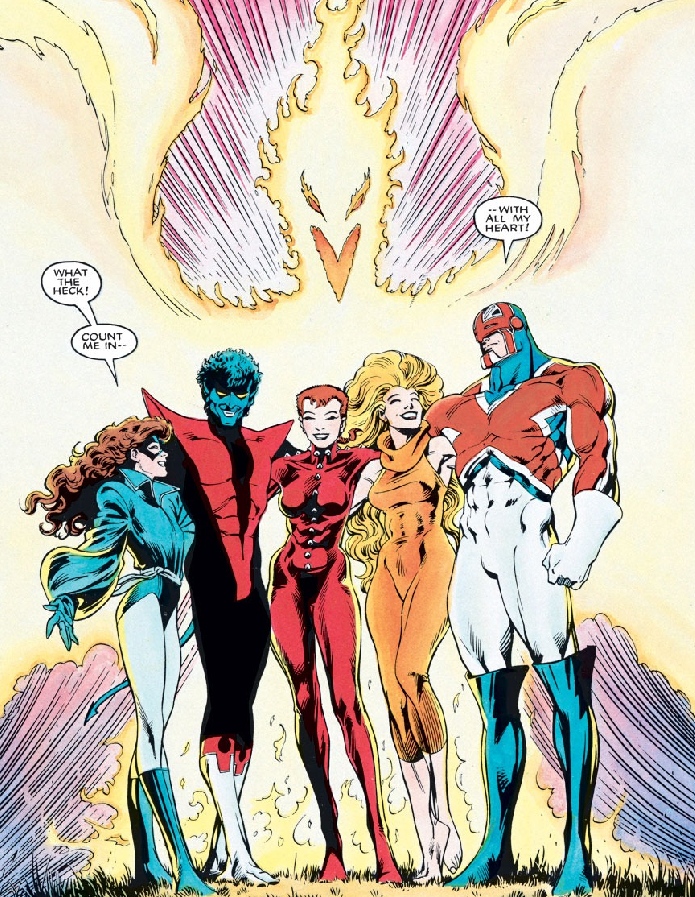 It was actually born from the supposed tragedy of the X-Men's death at the climax of their Fall Of The Mutants storyline, with wounded survivors Shadowcat, Nightcrawler and the Rachel Summers Phoenix joining forces with Captain Britain and Meggan to fight the good fight, and to not give in to despair.

All of the characters had wounded pasts and struggled with life as a post-modern superhero, but they were also more of a family than the usual super group, and it was a comic with a lighter touch right from the start, especially with the fantastic art of Alan Davis.

Davis had been working steadily for a decade by the time he came to Exaclibur, and with the rock-solid Paul Neary on inks, he was absolutely peaking - his work had never been more lush, slick and smooth. His characters had never looked sexier, and his storytelling was so comfortable, each issue was like a tasty little meal.

His coming timing was sharp, and his figures were graceful - Nightcrawler had a lively spring in his step and Shadowcat slid through the confines of walls and comic panels. His ease with the physicality of his characters also helped with the comedy – this chase panel in #4, featuring a bunch of crazy body-swapping is still wonderful:

Claremont, Davis and Neary took their heroes into demon worlds and parallel dimensions, with a swashbuckling fervor that was utterly at odds with the prevailing mood in current comics, making it almost unique in mainstream titles.

The heroes, who all lived together in a haunted lighthouse, fought new inter-dimensional baddies like the Warwolves and their own evil Nazi doppelgangers, and still took on old school X-enemies like Arcade and the Juggernaut. They didn't give in to despair and melancholy, and it was great fun. 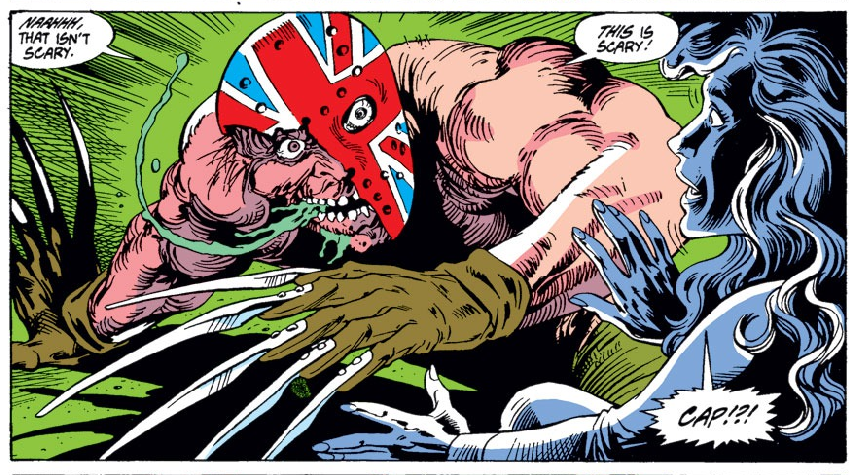 It still had its serious side – the first issue saw a couple of innocent people getting brutally murdered, and I'm still shocked by Courtney Ross' fate, all these years later. It was so abrupt, especially after she'd just made such an impression in Arcade's Murderworld, I'm still dealing with it.

There was complexity in this storytelling rush. There was still a lot of exposition, but most of Claremont's wonderfully overwrought script was focused on the feelings of the main characters, not what was happening to them. Their relationships as damaged people finding some comfort with each other, was way more important than saving the world.

So Claremont stuffed his comic with this stuff - filling speech bubbles and caption boxes with florid prose, his sing-song dialogue reaching a peak on this title.

I have no objective view of Excalibur, because for two years at the dawn of the nineties, I genuinely believed it was the greatest comic I'd ever read. Each issue was beautiful and smart and funny and exciting.

I was 14 years old when I first started getting it. I would scrape and save every cent I could to get that $4.35 I needed for a new issue each month, and it was the best $4.35 I ever spent, with these beautiful comics full of nice paper, bright colours, fun stories and gorgeous art.

I still have those issues I got from Baird's Bookshop on King St when they came out in 1989, and I have read those issues to hell, man. They're literally falling apart through over-reading, especially with some fantastically ill-advised experiments with regular sellotape doing irreparable damage. I really should trade up, but I love these individual issues like I love few other comics, and I'm reading them until they turn to dust in my hand. 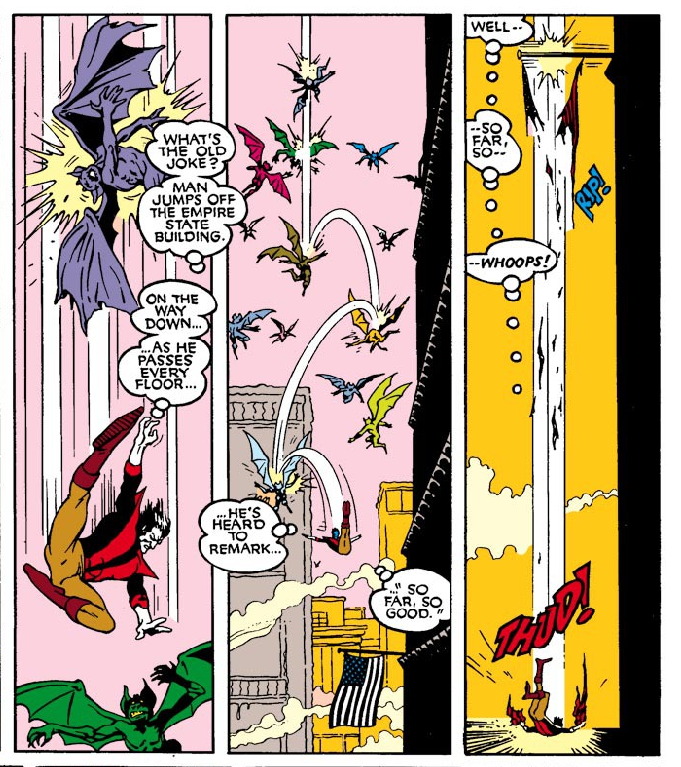 This crazy affection makes it easy to overlook the weaknesses in the comic, but they're still there. While Claremont was allowed to indulge in the whimsy, he was also given free reign to go crazy on his addiction to long-running subplots, and would set up dangling threads that would never, ever pay off. The mysteries of what was going on with that lighthouse, and what the evil Sat-Yr-9 was up to, were constantly alluded to, with any definite result.

This actually got quite maddening for a while, as Claremont was clearly making shit up as he went along, but it was also a brilliant strategy for a serial publication. It kept you coming back, and when the odd thing would pay off after years and and years of waiting, it was always spectacular.

But that love for the comic was really tested by the growing gaps between Davis' issues, and those gaps got longer and longer. The Cross-Time Caper dragged on far longer than it should have, and ultimately derailed all the momentum of the book. And by the end of that, Claremont and Davis were both effectively gone.

I had no idea what was going on behind the scenes. All I knew was that Michael Higgens and Ron Lim were no Chris Claremont and Alan Davis, and that the book started to take on a Marvel Comics Presents-level of quality, with blatant fill-ins and stories that were little more than training wheels for Scott Lobdell.