When it comes to films and movies and comics and TV, you’re more likely to find proper art in weird shit, more than you would in boring old story structure. The weird and strange should always exist purely for its own sake, contrasting against normal and predictable storytelling convention. Even the strangest of the strange fiction is grounded in some kind of reality, but crazy shit can always add flavour and spice and life to that reality.

So anybody who writes off Grant Morrison’s Doom Patrol as nothing more than weird nonsense is missing the point. It is full of weird nonsense, but that only makes the moments of raw humanity shine ever brighter. 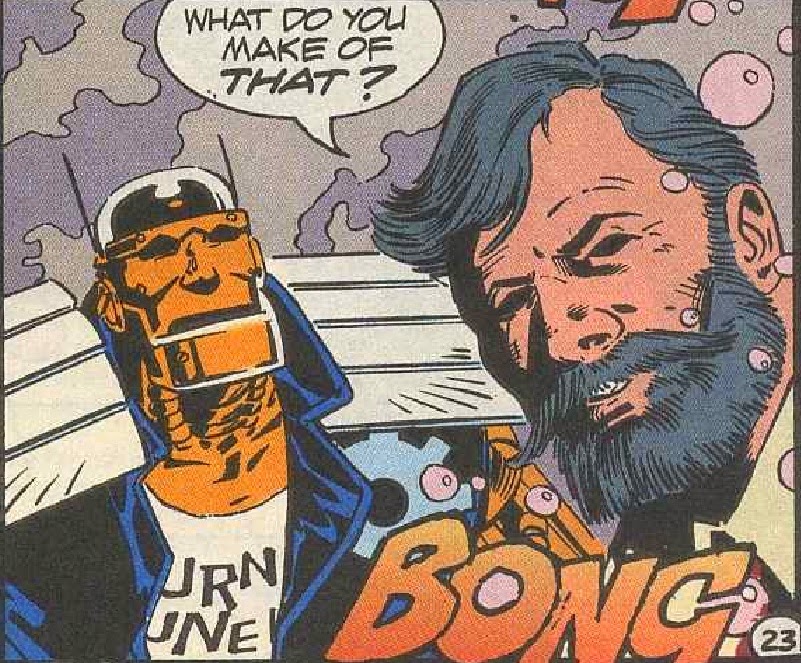 I always liked it when things get weird – the best parts of Twin Peaks always took place in the Black Lodge, I've managed to watch all of Kenneth Anger's Magick Lantern Cycle and anything that descended into vague, queasy and surreal strangeness was all right by me.

By my late teens, I was in the mood for something like that, because that's what teenagers like. And even though things like Namor the Sub-Mariner scratched that itch with its cosy weirdness, I wanted things that went totally bugfuck crazy. And one of the first places I looked for this was in Grant Morrison and Richard Case’s Doom Patrol comics.

I was already a solid Morrison fan – he was the first writer who I ever bothered to remember from a comic’s credit box – and everything I heard about this new Doom Patrol sounded right up my alley. Unfortunately, I was still growing up on the arse end of the planet, and everything I knew about this Doom Patrol run was taken from issues of Hero Illustrated and the Comics Price Guide. This mystery made it even more alluring.

And the first issue I ever found was The Beard Hunter, which was a fantastic place to start, even if it included none of the main characters and was a totally inconsequential story about a lunatic who hunts men with beards. But it was hilarious, taking the piss out of all the macho bullshit like The Punisher and Cable, and it was weird as shit.

I finally got access to a comic shop a year or so later and got the last six months of Morrison’s run as they came out, and had to go backwards to fill in the story, which was another incredibly apt way to read Doom Patrol. It proved incredibly hard to find a lot of the earlier issues, and I never read the whole story until the collected editions came out a decade or so later. 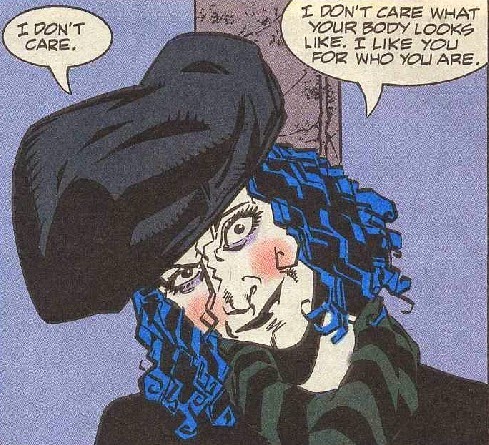 It’s the humanity of the lead characters that often gets lost in the discussion of the series – yeah, Crazy Jane is genuinely crazy with strange powers that burst out from her various personalities, and Rebis was a hermaphrodite creature of metaphysical black energy, but they were also people in a way so many superhero characters aren’t. They were often maddeningly inconsistent and incredibly glib about outrageous events, just like the real people they are.

Despite outward appearances, the members of the Doom Patrol were some of the most human characters in comics – Cliff Steele couldn't feel anything, but he still had fleshy emotions, and always did what needed to be done. Dorothy was just glad to be with people who didn't go on and on about how ugly she was, and Rhea just wanted to see the world through that freaky eye on her chest. Even Danny The Street just wanted his friends to be happy (and fabulous).

And they were going through some heavy shit, but could be surprisingly well adjusted. Both Rebis and Rhea were perfectly happy in their new forms, and weren't bothered by what other people thought of them. As a metaphor for any kind of sexuality, these freaks were fantastic role models. 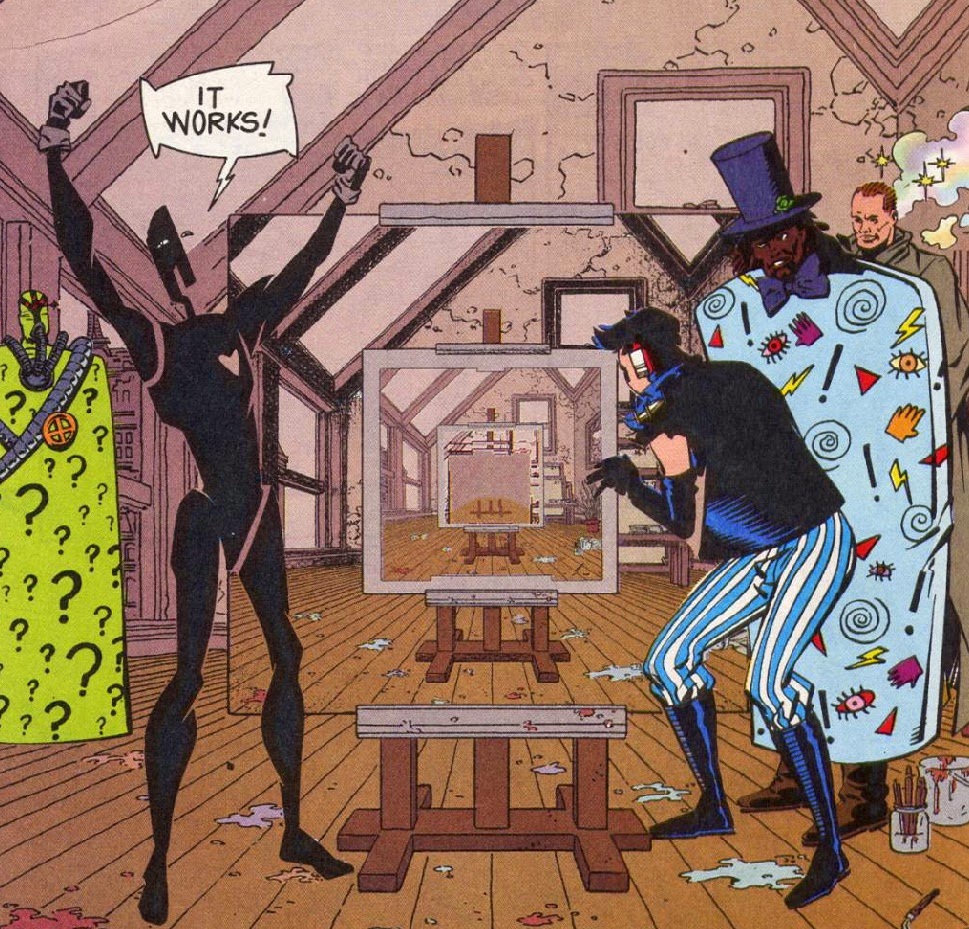 Yeah, it could pretty fucking weird, and that's fine, because weirdness never ages. But it was also pretty fucking horrific - creatures like the Scissormen or the Candlemaker didn't just kill their victims, they changed them into something horrible. It could also be pretty fucking funny – the fight between brain and brain, and Cliff's weary exclamations at all the crap he had to put up with, are still hilarious.

It could also be pretty fucking creepy, and could get quite quesy and sick, as people go through nauseous transformations, with unsettling shattering of assumptions and human bodies.

And it could also be pretty fucking moving.

It was the weirdness that got me started on the Doom Patrol, but it was the humanity that made it my favourite comic in the world for a while. They travelled through alien landscapes and haunted artworks, but the focus was on Jane's desperate bid for a stable love, Cliff's efforts to help, and Dorothy's wide optimism.

I'd only been reading the Doom Patrol for a few months when it ended, but the story about Jane and the Empire of Chairs still felt like a punch to the soul.

On its own, it's a perfect little story about the benefits of having a fantasy world in your head, even if nobody else can understand it, and about that fact that you can find great truths in things that aren't real. And it was a plantive plea for a better world out there, somewhere past our narrow horizons, and we could all use a few pleas like that.

I rarely get that gut reaction to superhero comics, and that passion for the Doom Patrol led directly into an overall obsession with all things Vertigo that lasted for years, (even if Morrison's Doom Patrol was never actually a Vertigo comic, wrapping up the month before the imprint was launched). 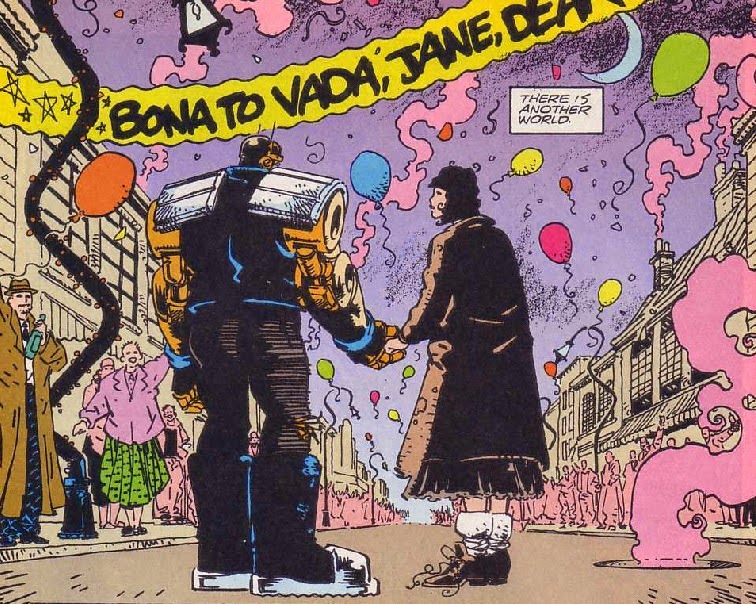 The Doom Patrol carried on, because even the most artistic and idiosyncratic mainstream comic book is still a commodity. Rachel Pollack's stories had some nice moments, and various gems of worthiness are generated any time a new version of the Doom Patrol comes along, and some comics, like China Mieville's recent Dial H For Hero, go for that same weird vibe, and grab some readers.


But I'll always think that there was no more Doom Patrol after Morrison left, if only because he leaves these strange, wonderful people in a good place. Cliff and Jane are safe forever, Rebis gets an eternity of novelty, and Dorothy faces the real world with optimism and cheerfulness.

If anybody deserves a happy ending, it's the Doom Patrol.
Posted by Bob Temuka at 6:49 PM

This has always been one of my favorite comic-reading memories. For a couple of reasons, I ended up reading Morrison's run in reverse, starting with the final issue and working my way back to Crawling From The Wreckage. It's the only time I've ever done this and with most comics it wouldn't make any sense but with this one, which often didn't make a lot of "sense" anyway, it somehow worked. Hard to explain, it just did. A great run.