Art without artifice – the world of Brown, Matt and Seth

The search for art – for anything that might be stylish, beautiful, funny, thoughtful or moving enough to get a reaction – is eternal, so you can end up looking forever.

My hunt for Art with a capital A takes me all over the fucking show. I'm looking for art in a GI Joe comic, or in dopey horror novels that never fail to disappoint. I catch glimpses of it in Namor The Sub-Mariner, and drown in it with the Doom Patrol.

In the fine words of Mr Nobody from that last comic, I want art for breakfast and art for tea. It's what we're here for. 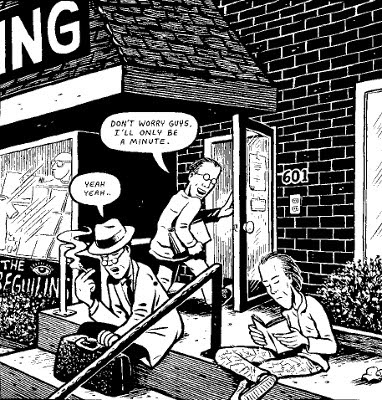 And while I can sometimes find the sublime in a superhero comic, there have been times I've been convinced that you could only find real art in comics when you strip away all the artifice, and tell open, autobiographical stories.

I always liked the silly stuff, but as I grew older, I also needed something a bit more recognisable.

So for a significant portion of my adult life, I was utterly convinced that you could only find real art in real life stories. As much as I loved Clowes and Bagge and Los Bros Hernandez and all the usual suspects, they often veered off into horrific or surreal strangeness, and sometimes I wanted something a bit more real.

Harvey Pekar led the way with his straight-up portrayals of modern life, but I've only come to appreciate his comics in the past few years. For most of my twenties, it was the work of Joe Matt, Chester Brown and Seth that was the highest ideal of this real world focus.

Of course, I'm making that bold claim on tenuous grounds, because it was hard to find copies of Peepshow, Palookaville and Yummy Fur down on the arse end of the world, so I could only get the odd issue, here and there.

But what I could get my hands on, I loved for its honesty and openess. Their comics inhabited a recognisable world of power bills and bus stops, of failed relationships and hopes for new ones, of plain old shame and embarrassment.

They were still stylish representations of the real world, with obvious exaggeration for comic effect, but it was easier to relate to Brown's guilty yearnings, Matt's remarkable pettiness or Seth's wistfulness for the old days than anything in any other comic I was reading. And it all came with just a dash of that kitchen sink magic realism that I found so tasty.

There were still small lessons to learned from big companies and their convulated universes – these comics all take place in their own strange little world, where they would often wander in and out of each other's stories, giving different perspectives on the same events, or just laughing at themselves.

There was no shame here, the artists taking ownership of their foolishness and silliness. Exposing your worst traits to the world takes a fair amount of fearlessness, but it's hard to be scared of anything too embarrassing when you've already revealed your deepest wanking issues to the world.

After that, what have you got to fear? No need to be worried about someone finding out your deepest, darkest secrets, when you put them down in words and pictures and sell thousands of copies. Exposing yourself on such a vast scale, even for the world of alternative comics, takes some balls. 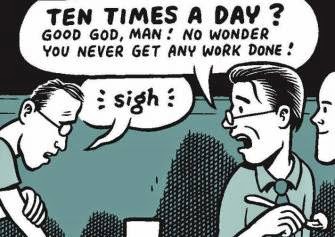 It was easier to put up with the uncomfortableness when Seth, Brown and Matt all had a distinct and pleasing cartooning style, with easy to read, comfortable lines. Even when they were dealing with deeply unpleasent subjects and stories of misery and deprivation, they were always eminently readable.

And while they shared the same emotional themes, their comics were all absolutely distinvctive. Joe Matt's stuff was always the funniest, Brown's comics could go anywhere, from biblical times to the absolute childhood of Underwater. And it's surprising how autobiographical early issues of Palookaville actually are, after all these years of getting used to Seth as an arch-formalist. 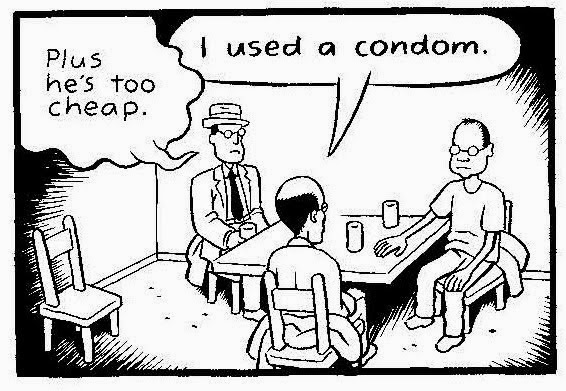 As the years rolled on, Brown and Matt's gaze went even deeper inward, bringing up new depths of embarrassment. The last few books from both creators have left a lot of readers baffled, and some have been outright offended.

Seth moved away from the purely autobiographical, focusing his stories on days gone by, and finding real depths in that ache for the past, an ache that can never be cured. But he still offers up the odd little slice of autobiography, and while the three artists rarely appear in each other's comics any more, it's good to know they're still out there, doing their own thing, because I always knew that was the only place you'd ever find real art.

I was wrong, of course. You can find real art everywhere, if you can be bothered to look, and bothered to look with the right eyes. There is beauty on advertising billboards, and in X-Men comics, and on the walls of the local gallery, and on restaurant menus.

There may always be a part of me that is convinced you can't really have art unless you take away all the artifice of this contemporary world. But there is a far larger part of me that knows that restricting yourself to just one type of thing, whether it's mainstream bollocks or alternative real-world heartbreaks, is pointless and limiting, when there is so much to appreciate.

After all, sometimes a pretty picture is just a pretty picture, and all that storytelling architecture that surrounds it isn't always that important. And while this is something else that took me a long, long time to figure out, I did get there in the end.
Posted by Bob Temuka at 11:35 PM