It's been no secret that I adore Mark Millar and John Romita Junior's Kick-Ass comics, and the more openly offensive and shamelessly tasteless they get, the more I like 'em.

And I enjoyed Hit-Girl just as much as the rest, even though it wasn't quite as blatantly shocking as Kick-Ass 2. It's just as funny and as energetic as the rest, and while there is a slightly sour whiff of redundancy over it all (there really wasn't any need to fill in these gaps), I always like it when creators go balls-out in an effort to entertain.

But I still feel cheated after buying issue five.

All right-thinking people justifiably see the Kick-Ass comics and movies as hopelessly adolescent, and ideologically screwed, but I don't see that at all.

There is a bit towards the end of the Hit-Girl mini-series, where the tiny titular character gleefully slaughters a bunch of convicts on death row - men who are trapped in little metal boxes, and have no defence when somebody sticks a machine gun through their bars.

Now I am 100% anti-death penalty, because I truly believe society has to be better than its worst examples, that we're not going to grow as a species by clinging on to stone age eye-for-an-eye philosophies on a societal level. But even I thought the bit where Hit-Girl kills a bunch of death row men (while quipping that she's saving the taxpayer some serious money) was pretty funny.

I don't find this hypocritical at all, largely because Kick-Ass isn't real. It's a story, and I like hyper-violent stories, almost as much as I'm turned off by real-world violence. I don't agree with the politics of many of the characters in Kick-Ass, but I don't have to, to enjoy their adventures.

Besides, she is a real psycho, who talks to dead people and kills many people without mercy. She's clearly not right in the head, so seeing her do something I would find reprehensible in the real world just kinda proves my point.

But I still feel cheated at the end. 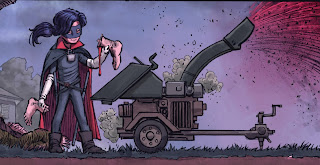 I can dress it up in all the social philosophy I want, but I still have to admit that I just like well-done action comics, with lots of blood and bodies flying through the air, and big car chases, and a dash of humour.

John Romita Jr remains one of the great modern action artists, his deceptively sketchy line conveying proper power and speed. And he is fantastic at showing the effects of violence – the pain, and the mutilated flesh.

And Millar always gives his artists what they want, and serves up a preposterous smorgasbord of action absurdity. Sometimes the pop culture references get in the way a bit, but at least they are always up-to-date.

Plus, you know, it's always fun to see an unstoppable killing machine unloading on repulsive people, and it's refreshing that this time it's a 12-year-old little girl, who's just a raging goblin of carnage, instead of the usual Big Man.

But I still feel cheated. 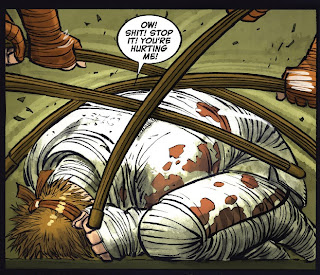 And the reason I feel cheated after buying Hit-Girl #5 isn't anything to do with the comic, which, obviously, I greatly enjoyed, it's because of the pricing structure. Because the last issue of a five-issue mini-series had a 66.89 per cent increase in price, which only corresponded to a 19.05 per cent increase in story. And it just seems a bit mean to pull a trick like that on the last issue of a limited series.

Mark Millar has made a big deal of keeping his comics at a $2.99 price point, when other similar products are now asking for $3.99 an issue, and it has certainly worked for me. I wouldn't have tried something like The Secret Service if it was a third more expensive, and when it doesn't work – like when Super Crooks #1 left me cold – it's easy to check out again.

But while Millar proufly trumpets the fact that his comics are a dollar cheaper than everybody else (even boasting of the fact in a cover tag line), the Millar Model Of Making Money always sees the last issue of a Millarworld mini series come in at five bucks.

But issue number five of Hit-Girl has four extra pages. Four. Fifty cents a page, much of which is made up of telling the same joke the comic has already made six times – that if you try and travel around the world to train up like Batman, people are going to rip you off.

Four extra pages isn't super-sized, it ain't extra-sized, and it's not even double-sized, it's just a-little-bit-bigger sized. Almost doubling the price for that (and a 27.27 percent increase in shameless shilling for other Millarworld comics) is just naked price gouging.

And that fifty cents extra a page is in US dollars. In my part of the world, it's more than a dollar a page for that extra story. What the shit, man?

And it's just so egregious to do that in the last chapter of a serialised story, because if you've lasted four-fifths of a story, you probably want to see how it ends, and the only other option is to pay much more for the hardcover that came out a week after the last issue. It'll be there, sitting there on the shelves, telling you that you shouldn't have bothered with monthly comics, because there is no value for money here.

But I think it just makes more economical sense to wait for the collection soon after the serial (or even better, wait six months and get it for dirt-cheap at a convention), and sod the monthly fix. The last few issues of every Millarworld comic is always fraught with delays anyway, so it's not-exactly-monthly.

It feels like better value for money to get it all in one place, and there less chance of being made to feel like a chump.
Posted by Bob Temuka at 7:28 PM

I agree with you completely. I've dumped almost all Marvel books, but Millar was keeping his stuff at 2.99. If this book was 3.99, it would have been okay I guess. But 4.99 was a rip-off.

And the final issue of Secret Service comes out, and guess what? It's also listed as 4.99. Are we gonna get a 25 page comic again for that price? 5 extra pages for $2 more? Terrible deal.