There is still a bit of the Marvel zombie and DC fanboy nestled deep within my soul, so I’m vaguely interested in keeping up with what’s happening, but those shreds of interest aren’t enough to actually buy the comics, so the library – which gets almost all of these comics anyway – is a fine place to see what’s going on.

The main side-effect of this is that I’m about a year behind on the events. I only just read the massively underwhelming Flashpoint, (which left such a nasty taste in my mouth that I have no desire to talk about it. At all.), and I haven’t read a single page of Avengers vs X-Men yet.

The most recent things I’ve read were an X-Men event book which launched the ALL-NEW status quo for the X-Men (which has already been thrown out, in less than the year it took me to get to it), and a lead-in to the AvX event, which mainly consisted of Cable trying to beat up the Avengers for reasons I could never figure out.

And while I wasn’t expected too much from these comics, I was still pretty damn disappointed in them, because they are fine looking books, and even have the signs of an actual story, buried beneath editorially-driven moves that render them nonsensical.

I know I shouldn’t expect much from this kind of comic, but I do want to like them because I always want to like fast, funny or fabulous superhero comics, which just makes the disappointment all the more bitter. 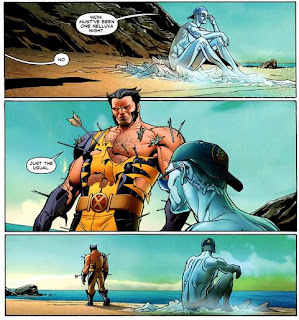 The Schism storyline in the X:Men books has a clear goal – split the last remaining community of Marvel mutants up into two groups – each dealing with the fear and hatred thrown at them in different ways. That’s a fair enough premise, but the way they go about it is so idiotic, it doesn’t even make sense.

It’s a shame, because the comic isn’t that bad. It’s a reasonably well-paced limited series that would actually be saying some interesting things about the psychological harm caused by the kind of death and destruction that always follows the X-Men, and it has some snappy dialogue (when the characters aren’t monologing at each other).

There is also some terrific art from some of the best modern action artists, including Daniel Acuna, a Kubert and the mighty Alan Davis – one five page fight at the end of Davis’ chapter is a brilliantly choreographed bit of fight fluff, (especially the bit where Wolverine's claws start to cut through Cyclop’s eye lasers). 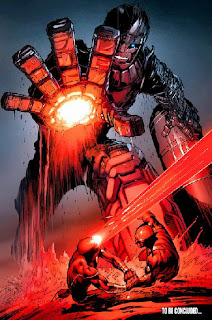 So there are some good fights in this comic, in the Mighty Marvel Manner, and in many respects it’s a perfectly fine superhero comic book, but all the goodwill towards it evaporates in the face of editorially-mandated idiocy. Because it’s apparently vital for the X-line that Cyclops and Wolverine fall out spectacularly, this requires both characters to act like complete douches, while completely ignoring decades of past storytelling. And that’s no fun at all.

The first thing that comes between the two senior X-Men is Cyclops forcing one of the younger mutants to kill a bunch of nameless henchmen to save lives, and Wolverine gets upset that innocent souls are now being forced to take the same bloody path he has taken. And Logan has a point here: the X-characters’ willingness to use lethal force – even though it never actually works in a universe with a revolving-door afterlife – has become a troubling trend in the comics in recent years, and it is nice to see someone stand up to that bullshit. Even if it is the most violent X-Man ever.

But when it all comes to a head, it’s over a giant Sentinel robot that is coming to rain destruction down on the X-Men’s utopia, and it’s played up as some great threat, even though those robots have been the least threatening villain in the X-books in decades. But rather than just dealing with the problem in the same way they’ve done dozens of times before, Wolvie flips the fuck out over Cyclop’s idea of using the incredibly powerful young mutants to stop it, and it all goes pear-shaped.

It’s fake drama and forced conflict – By the end of the story, Wolverine and Cyclops have to go their separate ways, so in order to get there, they have to treat the giant robot as some great threat, (and then Wolverine threatens to blow everything up to save it, which I still don’t understand).

Nobody bothers to point out a rampaging robot is nothing new. It’s an idea that Grant Morrison made into a joke on the very first page of his X-Men run, and that was more than a decade ago. It’s just another giant step back, and all the gritted teeth and pained poses isn’t going to change that. 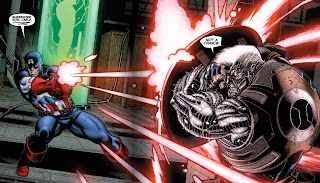 And then there was the X-Sanction comic by Jeph Loeb and Ed McGuiness, where it’s Cable’s turn to flip the fuck out for no adequately explained reason, in order to set up the next mega-crossover.

I was expecting even less from this comic, mainly because anybody who has been expecting anything great from Jeph Loeb in the past 10 years is either willfully blind to his faults, or just plain mental. But I did unexpectedly enjoy the last Loeb comic I read, and I do have a fondness for McGuiness’ bulbous cartooning, so it seemed worth the effort to give it a go.

And it’s the same thing all over again, characters forced to act massively out of character in order to set up the pieces for the next big thing, and no actual story – I just read the thing yesterday, and all I can remember about the story is that Cable wants to beat up the Avengers because the future says so, and that’s not a story, that’s just an action scene.

McGuiness’ art is still slick and powerful, but as nothing more than a lead-in to AvX, it’s incredibly pointless. It can’t be that hard to do this sort of thing, and actually have a point to its existence beyond ‘Coming Soon!’. Can it?

Marvel characters have been acting like total assholes to generate conflict for years, and there has been an increase epidemic of dickishness ever since Civil War.

I see enough of that in real life, and I’m not interested when that infects superhero comics and kills any further interest in following these stories, unless they do show up in the library, months after they changed everything forever.

I’ll still read the next big event, when it does show up, because I still like shiny new superhero comics, and there is always the chance Avengers vs X-Men will turn out to be more than a lead-up to the next thing, and actually have a proper story of its own.

"... there has been an increase epidemic of dickishness ever since Civil War." I said as much at the end of Civil War and pretty much dropped Marvel comics at that time. I don't generally look for validation, but it's good to know I wasn't off-base in what I was seeing.