The Boys: All you need is love

“’Cos all that macho shit – that gunfighter, Dirty Harry bollocks – it looks tasty, but in the end it’s fuckin’ self-defeatin’.

"It just leaves you with bodies in ditches an’ blokes with headfuls o’ broken glass.

“Men are only so much use, Hughie. 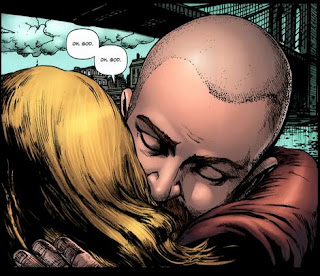 Some people say there are no such things as romance comics any more. That there haven’t been any romance books ever since titles like Young Love and My Romance disappeared from newsstand shelves. I say these people haven’t been paying attention to the alternative comic world, where there are loads of unashamedly romantic comics.

I also say these people haven’t been reading the Boys. Because The Boys was as romantic as fuck.

A lot of people could never see behind all the buggering jokes that Ennis and his artistic collaborators rammed into each issue. A lot of readers understandably didn’t find the idea of gerbils up the arse that funny, actually, and who can really blame them?

But there were moments of actual tenderness and intellectual thought, in there amongst the superhero decadence. Somewhere in there, hidden behind elongated cocks and bright red gore, The Boys had some interesting things to say about the extrapolation of power, and the pointlessness of violent revenge.

The reader didn’t even have to look hard to find this stuff. Each issue of The Boys was so narratively stuffed, there were pages and pages where James Stilwell, the ultimate villain of the series – who also happens to be a straight businessman who doesn’t even really pay for his innumerable crimes – clearly explains everything.

This was, incidentally, the scariest aspect of power that The Boys ever touched upon. Sure, the Homelander could devastate entire cities with his psychopathic hissy-fits, and terrible men did terrible deeds to keep the status quo going, but the big bad guy is just a corporation in human form.

(I read every single issue of The Boys, and I can’t even remember his fucking name until I made the effort to look it up, which is kinda the point.)

The corporation that is responsible for the vast majority of horror in The Boys is still there at the end of the series. There have been scapegoats and witch hunts, but the same hands are on the same reins of power.

Because corporations don’t really care about ideologies, and you can take down the people involved, but they will usually be fall guys, and others will take their place, and business goes on. It’s more threatened by Bad Product than anything its enemies could do to it.

This behaviour can be changed – you just have to prove to the corporation that a mode of thinking is unacceptable, and not worth the cost or effort. But it’s a type of modern thinking that can’t really be beaten. 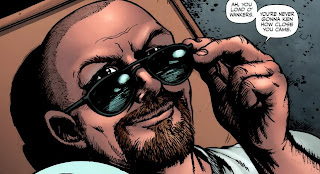 The series could have ended with this down note, but there was more to come. Most of the silly superhero stuff was dealt with in the penultimate story arc, the final story was all about consequences, and revenge, and love.

And yes, it was still taking the piss out of super-heroes, as well. The final issue comments on attempts to strip superheroes back to absolute, blank-page basics, without actually changing anything fundamentally different, and laughs at this particularly super-hero misfortune.

The whole series did spend a lot of its time gleefully ripping into many of the core ideas about superheroes. Ennis isn’t against the fundamental idea behind superheroes – he does a terrific Superman, but he hates the way they became the end-all of comics in most peoples’ minds. And since he has no nostalgia or warmth towards the concept, he rips into them, usually to the point of absolute silliness.

And then there were a lot of moments where the silliness got sublime (especially in the excellent Frenchie issue, or the part when representatives of all the big Allied countries teamed up to kick the fucking shit out a Nazi cocksucker).

But the most successful moments in The Boys weren’t the silly bits, or the parts where a superhero cliché was thoroughly desecrated, they were the moments where somebody shows somebody else a little kindness, or a little compassion, or a little goddamned human feeling, when they have no reason to.

After all, the main character in The Boys wasn’t a brutal butcher, or a big mother’s boy, or a super Aryan nightmare, it was wee Hughie, a little fellow from Scotland. 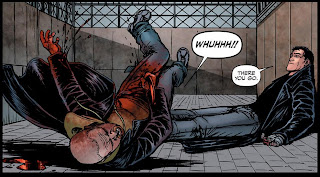 When Hughie saves the day at the finale of The Boys, he doesn’t do it with violence or anger. He still gives it a go, but he’s totally useless at it. Instead, it’s the fact that he’s a nice guy, that he’s always been a nice guy, that saves everything.

Hughie was – by far – the least violent character in The Boys. Towards the end of the series, he got the revenge he was after since #1, but he just felt a bit sick afterwards. Hughie never gets off on the violence.

At the end, Hughie does stop Butcher from doing something monstrous, and saves the world with blind good luck, and the fact that he's a nice guy, who Butcher can't let fall to an idiotic death. 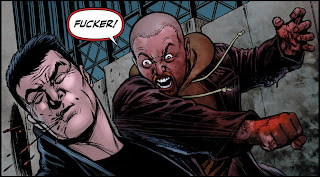 Even though Hughie does lose his shit at the end (and it’s over his parents, who he also moaned and groaned about, but was finally driven to a murderous rage by the thought that something terrible had happened to them,) and even though he still plays the little political games in the final issues, and even though everybody else in the series spent half their time making fun of him, Hughie's lack of violence and anger does win out.

Because all that macho bullshit didn’t mean anything, and just ruined a lot of peoples’ lives. Hughie is one of the only characters who bothers to sit down and actually talk to people, rather than order them around, or threaten them, like everybody else does.

And by the end of The Boys, it's clear that the old ways of vengeance and blood are just going to lead to more and more bloodshed, and that it's not good enough anymore. 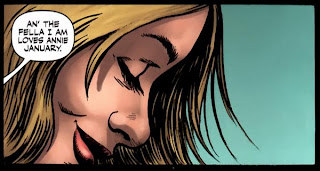 And the thing that saves wee Hughie, when he could have gone as dark and horrible as everybody else, is love.

His relationship with Annie has been crazy, light, funny and genuinely warm, and for the series to end with them in each other's arms is just the perfect way to cap it all off. They sort their shit out and move on together as a proper couple, and they live happily ever after. (It's notable that the phone call where they actually figure it all out for the final time isn't shown in the comic, because it's none of our bloody business what they actually say to each other.)

The Boys had plenty of empty and cruel sex, and showed that without love, men will let hate rule their lives. Ultimately, the comic takes a romantic path into the future.

And despite what all the old comics used to say, romance isn’t just flowers and dancing and restrained tears, romance is about wanting to be with somebody all of the time, and wanting to protect them, and being terrified of losing them.

Romance is hard and scary, and the comic does end with a quesy fear that something terrible happening again. (But it doesn’t. Not today.) And it's totally worth it. It's always worth it.

And seeing this comic finish with a loving embrace beneath a rebuilt bridge is one last reminder that The Boys was more than just a comic about fucking superheroes.
Posted by Bob Temuka at 10:44 PM