Pat Mills and Kevin O’Neill’s ultra-violent comic creation is a hero hunter who hasn’t found any yet. He’s a complete psycho, and the only thing that justifies his murderous rampages is the fact that the superheroes he fights are even more psychopathic and depraved. And when he takes such glee in his violent retribution, the carnage ends up being quite endearing.

But he can be a dangerous character to be around. He delivers wholesale slaughter upon evil bastards who deserve it, but many get caught in the crossfire. Marshal Law’s partners, sidekicks and love interests invariably die in terribly gruesome ways, (and then their corpses are usually desecrated in some unholy way). Marshall Law doesn’t play well with others.

Except when he does, because it turns out that some of the most successful Marshal Law comics are the crossover ones.

It takes a special kind of comic character to cross over into Marshal Law’s world – the idea of a Superman crossover is truly horrific, and not in a good way. Poor Kal-El would get a kryptonite baton up his rear end by page three.

But characters from Clive Barker’s Hellraiser, Erik Larsen’s Savage Dragon and Arcudi & Mahnke’s The Mask all popped up in the good Marshal’s world, and proved to be a surprisingly comfortable fit. 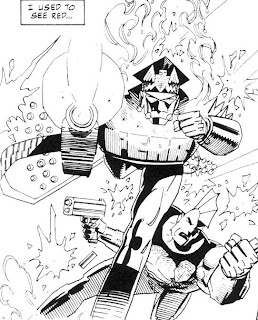 They were some of the last Marshal Law stories to be published before its unfortunately ongoing hiatus – it’s notable that these three comics were published by three different publishers, (Epic, Image and Dark Horse).  But they are all more Marshall Law stories than anything else, continuing Joe Gilmore’s ongoing saga behind that mask and barbed wire armband, with major changes for the character’s status quo in these two-issue shots.

Overall, Marshal Law can be a bit repetitive, and sometimes gets a bit flabby, but in these three crossovers, Mills and O’Neill work within the rigid parameters that come with dealing with somebody else’s characters, using them to craft tight little stories. Pinhead vs Marshal Law, The Savage Dragon/Marshall Law and The Mask/Marshall Law might be all from different companies, but they’re also tight little two-issue stories.

They pack a lot of plot in those two issues, and there is plenty of Kevin O’Neill’s hyper-genius art in each 48-page story, but each book also has its own unique charms.

The first – Pinhead vs Marshal Law: Law in Hell - was published in 1993 by Epic Comics. It sees Law take on the Cenobites from Clive Barker’s Hellraiser. Epic was publishing both comics, so a crossover was obvious.

It does have a bit of that Marshal Law flabbiness – the plot is all over the show, especially when it ends with a sudden rant about how superheroes have no place in war comics.

But who cares about narrative meandering? Not when you’ve got Kevin O’Neill serving up his own demented version of Hell.

A lot of people find O’Neill’s art genuinely repulsive, and sometimes it’s hard to blame them. The only artist whose entire style was too much for the Comics Code Authority, O’Neill is the type of artist who relishes the chance to do something really, really grotesque. His love for the disgusting image has always been obvious – I still feel a little disturbed by the aliens in the first Nemesis book, especially the creature whose arm ends in a teeth-filled stump.

Apart from an eerily disturbing image he did for Alan Moore’s Dodgem Logic, O’Neill has toned down his art in recent years, with his more calculated and restrained League of Extraordinary Gentlemen work (and even then, he still got in an eyestalk-penis or three).

But in Marshal Law, with Mills happily goading him on, O’Neill is outstandingly perverse, and given the chance to go straight to Hell, o'Neill leaps in with both feet. There is techo-organic body horror, with demons who have razors where their noses should be, and musical instruments filled with human innards and giant pulsating breasts which shoot fire into the sky and the usual gross architecture. It’s magnificent, and even twenty years later, still brilliantly repulsive. 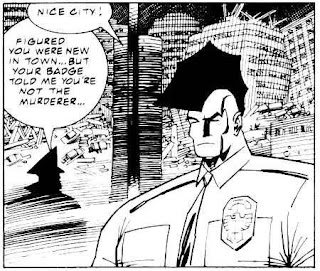 The next crossover – a fairly straightforward detective yarn with Erik Larsen’s Savage Dragon in 1997 – is significantly less repulsive. There are still some horrendously gory murder scenes, but after a decade of CSI marathons, this kind of thing is now positively mainstream.

It’s also one of the few Marshal Law stories that is printed in black and white, and without the garish reds and purples that saturate the rest of Law, the horrors are muted.

Interestingly, after all the superhero pisstakes, the Savage Dragon is treated with a degree of respect in the crossover. He might have been part of a company that set the artistic standards of mainstream comics back two decades, but the Dragon is the individual creation of an individual creator, and Mills respects that. He has no trouble slicing up thin analogues of the Legion of Super-Heroes, but he doesn’t crap all over the Dragon, and the fin-head leaves the story with that rare thing: an intact dignity. 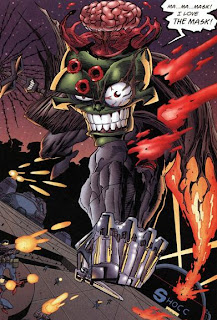 The Mask – in the third and final crossover in 1998 – doesn’t quite get that same degree of respect, but The Mask is a vicious and incredibly dangerous force of primal nature. And that level of over-the-top madness is another decent fit with the Marshal’s world.

It’s another crossover that deals with Big Events in the Marshal Law story – it sees the return of the main villain from the very first story, and has Joe Gilmore finally get over his deep-seated hatred of superheroes (even if his alter-ego isn’t over it at all).

Mills still lets his hatred of superheroes shine through – depicting them as vain and stupid, and more interested in glory that actually helping people, while O’Neill is still firing on all cylinders

Both creators also get a chance to let their imaginations really run riot with the Mask: His brains pop out of the top of his skull, the Tex Avery wolf comes out and starts biting arms off, and an attempt to look “weird enough” to get into a club involves pinning back the stomach skin and exposing the intestines.

It’s relentlessly creative, even if, as ever, it’s like to repulse most normal-thinking people. 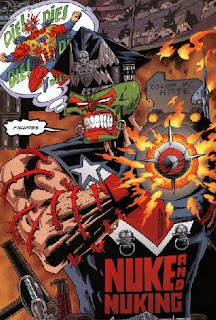 But who cares about the norms? A comic like Marshal Law actually has huge sympathies for the real freaks of society, as long as they’re not out to hurt other people. A bit of freakiness is good for the soul.

It’s also sadly missed. After The Mask crossover, there were no more Marshal Law comics. It ends with Law heading off on another kill-crazy rampage, and that’s where he has more or less remained for the past 15 years. (There were some illustrated text stuff, but that just proved that as a novelist, Mills is a great comic writer.)

Ever since, O'Neill has been busy with the 'project with Alan Moore for Image' mentioned on the last Marshal Law letters page, and he shows few signs of tiring of the League of Extraordinary Gentlemen any time soon. But more Marshal Law would always be welcome, with plenty of new superhero cliches from the past decade to bite into. Another crossover could be a good way to relaunch the character, given the success of these previous works.

Who knows? Maybe it's time for that kryptonite baton.
Posted by Bob Temuka at 10:51 PM