I’m digging deep into my big bag of hypocrisy today, because after all that moaning in the last post about haters, I have to admit I greatly enjoyed reading the Hooded Utilitarian’s Anniversary of Hate.

Mainly because I agree with a lot of the stuff they are having a good moan about, and the writers often articulated problems with these comics that I could never put into words. It’s also cute to see people ripping into things like Watchmen and Sandman as if they’re sacred cows that have never been taken down a peg or two. (Hell, people have been doing that for so long – for decades – that I actually find it sweetly nostalgic when somebody says Watchmen ain’t all that.)

There were plenty I didn’t agree with, but I can always appreciate another point of view, even if I think they’re wrong. But there was one I couldn’t let lie, one I just have to disagree with. 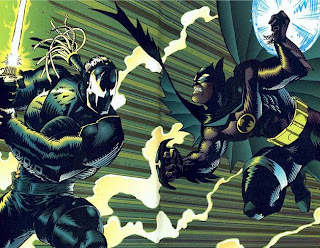 There is a nagging sense of wasted opportunity in Matt Wagner’s career over the past ten years. He has been happily working in the world of licensed comics for some time, cranking out Green Hornet and Zorro comics for the past couple of years.

While these comics are invariably okay, they’re little more than that. Usually hampered with sub-par styleless artwork, they are painfully average comics, and a world away from the complexity and experimentation of his earlier works.

After all, his Grendel and Mage comics took epic storytelling in strange new directions, Grendel constantly evolving into weirder incarnations, while Mage got more laidback as it took on the secret myths of the universe at the speed of life.

Decades after they were first unleashed, neither story is quite done. Mage has to wait until Wagner feels the itch again before the final part of the story can be told, and he’s shown few signs of scratching that itch in the past few years. His entire Grendel saga is a goddamned masterpiece, a vast and sprawling examination of power, and evil, and will, and there was a new Grendel story a couple of years ago and there could be a new Grendel story tomorrow. 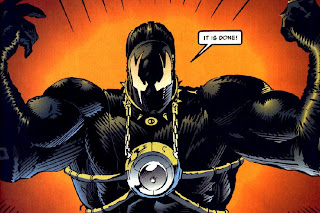 The constant evolution of Grendel was its greatest strength. Why not have more Grendels after Hunter Rose? Why couldn’t a hyper-personality infect an entire culture, to the point where it becomes a symbol of military honour? Why not?

The art – in all the various Grendel series - was often jagged and ragged, and while some of it has dated horribly, it is compulsively stylised. Wagner would draw the odd story, and usually had some kind of new quirk in his warm, flowing style. He would shamelessly steal ideas from Kurtzman, but hey - if you’re going to be influenced by anybody, you could do much worse than Harvey.

This was all in the eighties, where literary aspirations were all the rage, and Wagner crafted a complex work, with dense prose and breathtaking storytelling experimentation, crafting stories about sounds in a silent medium, or squeezing the ultimate number of panels onto a page.

Wagner’s own evolution from young & keen to old & safe has been a slow one, but there is still the feeling of a sharp turn somewhere in his career, somewhere where his work got more simplistic. Less complex. Easier.

Somewhere around the second Batman/Grendel crossover.

The first Batman/Grendel comic had all those lofty literary ambitions and was well received, the second had Grendel Prime smashing his foot through a bridge and is often cited at the moment that Matt Wagner lost his mojo.

The plot of the second comic was not as intentionally complex as the first – there were none of the duelling narratives or storytelling shuffles or pages and pages of cursive text in the second comic, but it’s unfair to say the story is more simplistic. It’s more streamlined. More efficient.

Batman/Grendel II has several long, sprawling action scenes, and features a main character whose idea of reasonable discourse is a shotgun to the face. But it’s still packed full of incident. There is time travel, and laser swords, and moments where strong men stand up to stronger bullies. A major part of Grendel Prime’s life – his further adventures with Susan Verhagen – are covered in a couple of tiny panels. There is all sorts of crazy super-science going on, and crazy occult shenanigans with a True Idol

The comic is more cartooney and more ridiculous than anything Wagner had really done up to that point, but it was also very fast paced, shooting through the story at speed. For a Grendel comic, it was possible to get through it in record time (which also doesn’t win it any favours with readers who measure quality in the amount of time it takes to read a book).

Wagner didn’t just suddenly dumb it down for the Bat-franchise, he was changing as an artist. An apparent embarrassment at his own youthful verboseness saw Wagner strip it all away for the War Child series, several years before Devil’s Bones. No extraneous prose, lots of action, letting the silent panel speak as loudly as a fake diary entry.

War Child had the wonderfully open art of Pat McGreal, but the best Grendel comics were always the ones drawn by Wagner himself, and this is where Batman/Grendel II also stands as a major signpost in Wagner’s career – one where he really started to adopt a far looser line.

At this point, Wagner’s softness becomes scratchier. While still incredibly polished and styalised, there are wild and open strokes of art. It’s not as formal, a little less starch in his style.

And it’s perfect for the non-stop momentum and mayhem created when Grendel Prime meets Bruce Wayne. Wagner’s characters are actually affected by things like weight and gravity, but still fly through the air with grace and poise.

Grendel had already mined a rich vein of experimentation in Devil Quest – the story that led up to this. It had some astonishing use of colour, and twisted the eight-page narrative into new and strange shapes. Batman/Grendel II had little of that. It was all straightforward. Purposeful. Directed. 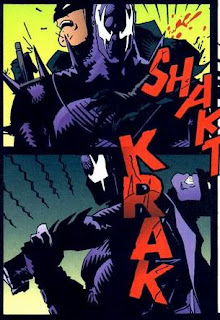 While Hunter Rose is a fascinating character, the whole tortured-genius-striking-back-at-the-world-after-losing-his-lover thing is a little adolescent. He remains a terrific character who haunts Wagner, but my favourite Grendel character was always the Prime.

He’s more machine than man, reduced to a brain in an iron body by this point. But he’s not just a mindless Terminator rip-off – there are weird complexities beneath those blank white eyes.

He’s an errant knight who is utterly useless unless he’s on some kind of quest, an immortal man who is not afraid of death, somebody who shows no remorse and no regret over killing anybody who gets in his way, but doesn’t go out of his way to deal with anybody else. He is the ultimate perfection of Grendel, a creature of such will and strength that it can’t be stopped.

Bats could just about hold his own against Hunter Rose, but he didn’t stand a chance against Grendel Prime. All he does is slow him down, or prevent him from casually massacring millions. It’s notable that Batman does defeat Prime with some ultra-tech, but loses him when his body demands sleep. 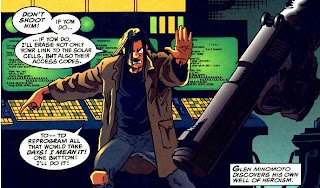 And yet – there are faults in the Ultimate Devil. Moments where Prime is stopped in his tracks by somebody willing to sacrifice themselves for somebody else. He doesn’t get it, doesn’t understand why somebody would do that.

This all culminates in Robin showing up at the climax of Batman/Grendel II, a symbol of relative innocence in a dark world. It’s Prime’s blind spot, the one thing he can't comprehend, and that's why he ultimately fails in his Devil's Quest.

As Wagner evolves - almost visibly on the pages of this comic - so the characters in his story have also grown from the first showdown between the devil and the bat. Grendel has taken the darkest of paths, and boiled down to something cold, hard and remorseless, while Batman has not lost sight of his own humanity, and by holding on to things like compassion and innocence, he never goes too far over to the dark side. 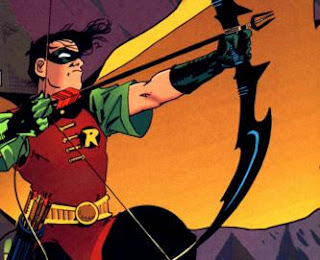 Back in that Hooded Ulitariran post, Jason argued that Batman/Grendel II might not be the worst comic in the world, but that it held a special place of hate in his heart, because he was gutted at the loss of a cartooning voice he cherished, and "too angry at the imposter that strolled in and tried to take his place".

It does represent a point when Wagner was moving away from his earlier style, but his new, looser line is just as beautiful, and far more energetic. That alone makes Batman/Grendel II one of my favourite action comics of the past 20 years.

And while he has been mired in comfortable licensed comics for a while, the spark of innovation and experimentation is still there bubbling away - his Grendel: Black, White and Red comics from the past decade have been fascinating, even the stories that are outright failures are still interesting, and still full of a comic creator trying to do something new, trying to reach for something better.

It might be some time before there is another Grendel comic, not least a Grendel Prime story. But if Wagner does ever check back with Grendel, I’ll be along with the ride, giving the devil his due.
Posted by Bob Temuka at 11:46 PM

As old as this post is, I do feel the need to do something I rarely, if ever, do in posting a comment; and that's nitpick about a minor error of some kind. The artist of War Child was Pat McEown, not McGreal. The only reason I'm pointing it out is because McGreal, if my memory serves me correctly, is actual comics artist who I think drew at least one of the Grendel Tales series.
McEown himself hasn't done much work in comics since then other than his own book 'Hair Shirt' a couple years ago. From what I understand, he's been working on 'Venture Bros' as a storyboard artist or something like that.
Either way, enjoyed the post even though Batman/Grendel II is, I believe, the only part of Wagner's epic I have not read.