Another Big Book of Bolland

For reasons both boring and intangible, I just wasn’t feeling the love at this year’s Armageddon geek convention in Auckland, so I didn’t hang around when I rocked up on Saturday morning. I didn’t bother going to hear any of the guests speak, or watch the films they play in the giant auditorium, or even sit around and shoot the shit with the local comic talent.

Instead, I just waltzed in, bought up a small mountain of various back issues, and waltzed out again in less than an hour. I was just all about the comics. I got some good stuff in that pile – the John Smith/Sean Phillips issue of Hellblazer that I’ve been after forever, a random splattering of recent Mark Millar comics that I missed, more Lobo, some of that weird Gerber/Colan Phantom Zone mini and a bunch of noble women’s lib issues of Wonder Woman.


(My favourite part of the Phantom Zone comic so far is the very first sentence: 'PERRY WHITE IS A NEWSPAPER OF THE OLD SCHOOL.')

But the real score was a book I didn’t even know existed, until I saw it on one of the tables, going for a mind-numbingly cheap forty bucks. There was no hesitation. I had to have it. I had to have one of these: 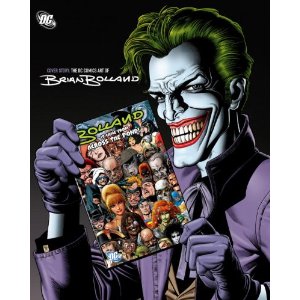 In a display of laser-accurate gift-giving, my lovely wife gave me Image Comics’ The Art of Brian Bolland one Christmas, after I’d jealously moaned about the fact that pal Nik had a copy, and I didn’t. But this new book that I found at the convention – and devoured in less than a day - was just focused on his endlessly gorgeous DC comic covers, and was just as immediately indispensable.

Hundred and hundreds of pages of Brian Bolland art? Showcasing all sorts of clear surrealist nightmares, pure superhero popcorn and the odd grotesque creature, all in that perfect Bolland line? How could I resist? How could anybody resist? 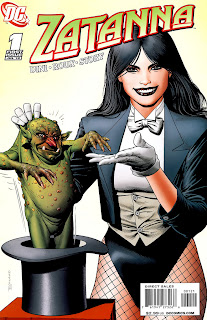 We take Bolland for granted now, after hundreds of comic covers, and too-few comic stories. It’s easy to forget there was a time when Bolland was the shiny new kid on the block, blowing out stodgy bad habits of the seventies with his fresh line.

After the stuttering efforts of artists like Barry Smith, Bolland was the first of the British comic new wave of the eighties – selling his first cover to DC in 1979 and swiftly finding an appreciative audience for his clean art. So open and shiny, with a consistency with his anatomy that makes every cover instantly inviting.

Cover Story goes all the way back to the early days, followed by more than 200 pages of art. A lot of it has been seen, time and time again, like The Killing Joke cover, or some of his Wonder Woman poses, but there are also tonnes of Batman covers I’d never seen before and various Curt Swan homages that had achieved a limited release. 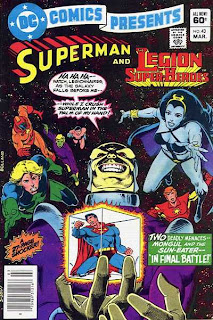 The new book also comes with Bolland’s own thoughts about his art, with the artist writing about his own art in an open and breezy manner. He can be harsh and self-deprecating at times, but he’s also unashamedly proud of certain pieces. He discusses his little tricks for making colours pop, and why he will never be Joe Kubert, and why he disapproves of variant covers.

He is also an unashamed gossip, name-dropping all over the show. (His Ditko encounter is a terrific little story of awkwardness in the presence of greatness, with a killer punchline.) But he’s also extremely complimentary to his fellow artists whose work he follows or enjoys.

His commentary is particularly interesting around the turn of the century, when he started getting heavily into photoshopping his comics. His earliest digital efforts, especially on late Invisibles covers, have already dated far more than his earliest work, which has a simplicity that never go out of fashion. But even if he goes overboard with strange new textures and a series of blurred layers, Bolland explains his reasoning in the captions, and it is clear that all the mis-steps were just part of an evolving style. 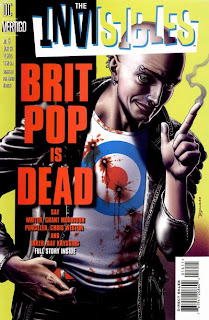 Bolland’s art is instantly appealing, but it can take some effort to really describe that appeal. After all, a lot of his work can be clumsily staged or awkward, and as the artist himself points out, there are some things he is just rubbish at drawing. He can’t do a very good horse, (although he’s been known to do a good monkey or two).

He can never quite capture the kinetic energy of early action artists like Kubert or Gil Kane, his work stiff and still, no matter how many of those tiny jiggling lines he uses for shuddering movement.

Despite ongoing experimentations with shading and colourful depth, Bolland’s art can also look incredibly flat, sometimes reducing action shots to nonsensical posing. Characters can also feel divorced from their background, something that has only got worse as photoshopped layers crept into his work.

And yet, it’s also easy enough to sum up the appeal in one simple thing – it’s that Bolland line. That crisp, sharp and timeless Bolland line. His efforts at painting have invariably been unsatisfying because they cover that gorgeous line, and it’s been strong enough to survive the leap from the paper page to a digital arena with minimal real change. 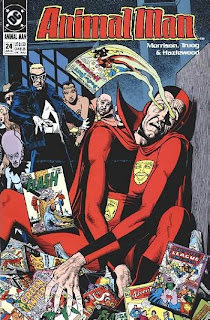 While his evolution as an artist has been slow and minimal – a Bolland cover from 1982 is obviously the same artist behind a 2012 cover – he has refined that surprisingly thick line over the decades. And he has never been afraid of a little experimentation, even as he relies on skills that were honed thirty years ago.

There are other aspects, other than that sharp line, that make Bolland’s art such a damn pleasure to look at – the fine detail that has no more embellishment than necessary, his innovative use of colour, and willingness to try new things. He can’t hide his own affection for things like big monsters and swooping superheroes, and that glee comes through in any cover that features something like that.

And while his art can be iconic and grand and majestic, it can also been bloody funny, with a thick sense of dark Black British humour behind his open art. It’s what makes him the definitive Joker artist – he captures the malevolent mirth of the character like few others. Eyes of evil, a grin of absurdity and a chin so sharp you could cut your hand on it.

His humour is everywhere in his art – goofy expressions and surreal madness caught in his cold eye. His characters are often entangled in bizarre situations and complete ontological breakdowns. Reality unravels, over and over again, but his Batman is always firm in the middle of that craziness, (with the weirdest hint of a smile, just the slightest smirk possible). 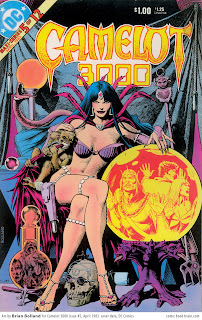 I could never be friends with anybody who didn't like Brian Bolland, but that's okay, because everybody likes Brian Bolland.
Posted by Bob Temuka at 10:27 PM

I'm not going to critcize Bolland just to have an iconaclastic look at me opinion (the guy is amazing but does have a lot of weaknesses, some of which you get at) but don't you think the covers to the first volume of the invisibles are better than than the latter two?

Actually, yeah. Those covers had more of a groovy flow that suits the Inivisibles perfectly, and Bolland's art does not have that effect.

On the other hand, I do think there is an occasional stunner amongst Bolland's lot. And I think my favourite single Invisibles cover is still a Bolland one - the cover for the last trade paperback, with all of the v3 covers remixed and messed up.

I think my favourite invisibles cover may be the one with the guillotine and the cypherman standing behind it. It may not sum the series up thematically, or indeed have any of the main players featured, but it gave me that eerie distrurbing feel you'd get from a good weird fairytale as a kid.

I also liked the one with the thanagarian warrior, hopefully because it captured Buddy as an out of his depth everyman so perfectly, but probably because, you know, boobs.

Yeah I'm also a devoted Bolland fan! (have both collections and look forward to his 'complete Dredd' work).

As you point out, his cover can be very static, but there's always a wealth of telling character detail in each piece that more than makes up for it. And his knack for iconic posing would give any Jim Lee type artist a run for their money.

'Killing Joke' is still the ultimate comics cover to me: it's iconic, and once the story is read - deeply unsettling and subversive.