You can fight City Hall, says the Antichrist

How come Chronicles of Wormwood – a comic that is full of sexual deviancy, outrageous violence and sheer perverseness – manages to teach a valuable moral lesson that a Green Lantern comic can’t?

Esteemed blogger Colin Smith recently pointed out the appalling moral failings of a new Green Lantern comic. In it, John Stewart - a brave hero who has a history of fighting against social injustice and intergalactic threats with the same fervour – faces off against some rich and corrupt men and realises ‘he can’t fight City Hall’.

Instead of calling bullshit on this claim, and taking the sleazy developers down, John Stewart just kinda wanders off and moans about the fact that being a superhero isn’t fun anymore.

I have no idea if the storyline has resolved this ridiculous introspection. For all I know, Stewart has found his balls, and found a way to fight the man, no matter how powerful he is. But it says a lot if his first reaction is to give up, go off and have a moan abut it.

There was a similar negative reaction to another moment in a recent Marvel mega event, where Spider-Man just shrugs and takes off. A hero who has faced down Thanos and the Silver Surfer, who will die before he lets his friends down, decides to give up, and it’s not just completely out of character, (and utterly contradicted in dozens of different places), it’s also the oldest and dullest storytelling trick – this must be a bad menace because even Spider-Man thinks he can’t take it down, so it must be bad.

I like my superheroes to be better than me, and it is profoundly unsatisfying when they turn out to be moral cowards, or simplistic fools. I get enough of that in the real world, I don’t need it in my superhero comic.

There are plenty of superheroes who are much, much funnier, smarter and braver than I am, and I never get sick of reading stories about them. While the case of the whining John Stewart was disappointing, there is always a new issue of Daredevil or Action Comics or Secret Avengers to wash that bitter taste out of the mouth.

I knew it wouldn’t be long before a comic would come along and tell me that yes, you can fight City Hall, and that it’s absolutely a good thing to do if City Hall is corrupt. I just didn’t expect it to be in the Chronicles of Wormwood. 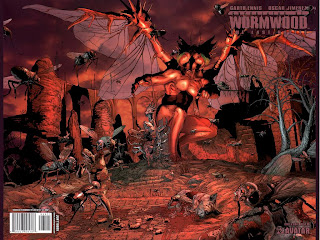 Chronicles of Wormwood: The Last Battle by Garth Ennis and Oscar Jimenez wrapped up a couple of months ago, but was barely noticed, largely because the last issue came out almost a year after the penultimate one. It also had typical Avatar covers that managed to be both totally bland and utterly grotesque, which saw them sink into the mass of gore in the Avatar section of the comic shop.

But there was still a decent comic beneath those intentionally horrible covers. The art by Oscar Jimenez is stronger than Jacen Burrows’ usual scratchy efforts in the first Wormwood comic, and it’s a typical Ennis script, which manages to mix some genuine sweetness in amongst all the depravity.

The Chronicles of Wormwood series (which should not be confused with Ben Templesmith’s excellent Wormwood: Gentleman Corpse) is all about an antichrist who doesn’t want to do what he is told, so he becomes a television producer instead and enjoys life, rather than trying to destroy it for all time. His best pals are Jesus – who nobody can lie to – and a talking rabbit, and he can do one impossible thing every day.

The Last Battle sees Danny Wormwood grow up a bit and stop lying to his girlfriend, while also dealing with a fresh attack from the very dead and utterly odious Pope Jacko.

There are lots and lots of knob jokes, some alarmingly imaginative swearing, disgusting demons, gruesome and disturbing gore and all sorts of perversion. It is a pretty cynical comic about a lot of things – the willingness for people to do something awful if you pay them enough, or some bluntly satirical jabs at the state of modern television.

But it’s also about growing up, and taking a path of kindness and co-operation over one of fear and paranoia. And it’s about standing up to City Hall.

When pope Jacko lays out his master plan for Wormwood, he tells him that they will ultimate ascend into political glory and bring about the long-awaited and long-postponed apocalypse, because, after all: 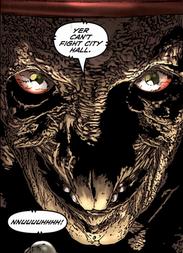 And he’s almost right. You can’t fight City Hall, because it’s too big and mean and tough. But you can still fuck it in the face.

The power of the Establishment has been blatant all over the world in recent weeks, with the casual use of mace one of the most obvious signs of institutional fear. Physically fighting back against that kind of power is morally inadvisable and personally dangerous.

But the little guy can always fuck City Hall, if he gets in the right position at the right time. Entire governments can be screwed over by the actions of an individual, and terrible corruption can be exposed by one person who is willing to tell the truth, or at least stand up for the idea that they’re right. You can’t beat up City Hall, but you can still make sure it’s doing what it is supposed to.

In that Green Lantern comic, John Stewart has no plan beyond A) beat things up. He has a magic wishing ring that can literally create anything he thinks of, and he can’t do anything to fight the Man. Danny Wormwood has a guy nobody can lie to, and one Star Wars-obsessed little rabbit, and he digs out the corruption at the core, before it gets a chance to spread and gain power.

This can’t be right. Why is the Antichrist teaching me a lesson that Green Lantern can’t? Why do so few superheroes have the smarts and balls to tackle a complex issue without coming off as total dickheads?

If somebody can use a rabbit literally fucking a man in the face to say something about the right way to deal with corruption, why can’t you say the same thing with a decent superhero like John Stewart? 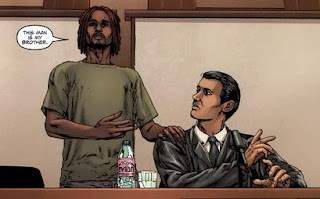 Even if a Green Lantern can’t fight City Hall, you can. Listen to the Antichrist. He knows what he’s talking about.
Posted by Bob Temuka at 1:23 PM

"Why is the Antichrist teaching me a lesson that Green Lantern can’t?"

It's enough to make a comic's reader ear's bleed, isn't it?

Great piece. Anyone drawing a line from GLC to WW, and finding the latter is actually more morally inspiring, has to be doing a good job :)

"Listen to the Antichrist. He knows what he’s talking about."

Only in comics blogging would that line make PERFECT sense ...

Why do comic books (and a lot of other media for that matter) continually push this bullshit "you can't fight city call" meme? Well, I don't know - who makes these comic books, by and large? Giant megacorps. Tell me, is it in their interest to try and empower people to fight back against government and corporate corruption & bullying?

Physically fighting back against that kind of power is morally inadvisable and personally dangerous.

Er...what? Sorry, but ain't nothing free in this world. Non-violence is nice and all as long as the opposition is willing to play along, but if they want to use violence anyway then you have every right to defend yourself weather the person beating and/or trying to kill you has piece of tin on his chest or not. Up to and including using deadly force on them.

I know that there are a lot of people out there who do not want to hear this but I'm gonna say it anyway: yes, there are some things are worth fighting for, worth getting hurt or even (*gasp*) dying for. If you don't believe that, then you are just prey for the first thug who comes along and is willing to risk his life to enslave you.