Well look, I’m never going to be the best judge of Simon Bisley’s artwork, because I was 14 years old when I opened up an issue of 2000ad and was confronted by THIS: 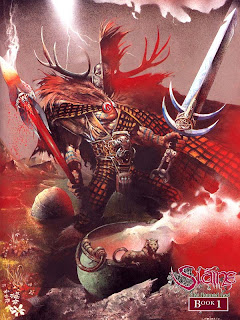 So after THAT, he had me hooked for life, and I love everything he does. He caught my eye with the sleekest Joe Pineapples and meanest Blackblood in ABC Warrior history, I got every issue of Lobo he ever did, and bought a couple of issues of Doom Patrol even though I had them in a collected edition, just because I wanted those beautiful Bisley covers. I’ve got the insane Melting Pot comics, and Bad Boy and the one issue of Global Frequency he did and I love ‘em all.

From several interviews he has given, Bisley has laughed at the idea of formal art training, and this uneducated enthusiasm is there in everything he does. The Biz is part of that breed of artist who believe power is an entirely reasonable substitute for craft. Fortunately, he is also one of those artists who has talent to burn, and he often sets it alight for fun, right there on the page.

With the type of projects he chooses, this style of art isn’t just a benefit, it’s absolutely essential. There is no way Lobo would have become so popular in the early nineties without that extreme and sloppy Bisley art, and the wild freedom to do anything - unconstrained by things like artistic logic or reality - made those Doom Patrol covers the best looking comics on the stands. 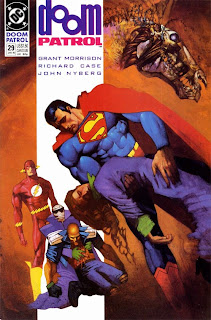 This is nothing new, but as time has gone on, his influence has settled in more deeply, even if it’s not as obvious as it once was. It’s almost impossible to underestimate Bisley’s impact on British action comic art in the early nineties.  Dozens of artists started chasing after that rush of Biz that came from those very first paintings of the Horned God, even if like all the best drugs, nothing beat that original high.

In the aftermath of that first Bisley explosion, he was seen glowering in interviews behind dark glasses, long hair and a fucking big motorbike. Bisley was one of the few real superstar artists 2000ad ever produced, but while somebody like Brian Bolland forced everybody who followed him to be as clean and detailed as possible, Bisley inspired others to go crazy with the paintbrush. Look at any random issue of 2000ad a couple of years after the Horned God’s debut, and you can guarantee that at least 60 per cent of it will be muddily painted art (which looked like crap on 2000ad’s cheap paper.)

There were diminishing returns in this style: artists as diverse as Clint Langley, Carl Critchlow and video director Chris Cunningham all started out by being told to ‘do a Bisley’, before they all found artistic success by branching out into their own style.

Even on Slaine, he would switch between lush, painted vistas and crude, ugly penciled faces to devastating effect. Some projects have been rushed and incoherent, others have been fully painted, and his overall style has seen several major evolutionary leaps.

Twenty-two years on from Prog 626, and Bisley is still doing the business. After years of relative quiet, during which he did the odd album cover for Danzig and comics for companies with names like Berserker and Full Cirkle, he has been chipping in on Peter Milligan’s Hellblazer comics over the past couple of years, resulting in drawings of the main character that look like this: 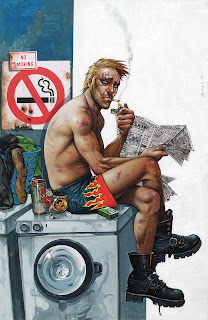 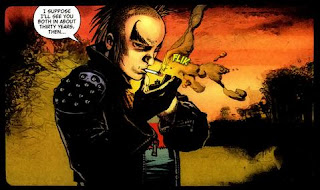 Hellblazer is currently blessed with the talent of Giuseppe Camuncoli, an artist who is making a mighty contribution to the comic with his moody and blocky art. As the series’ regular artist, he has taken on Milligan’s own brand of effete and spooky madness with glee.

But Bisley has also done some typically stunning covers, and the odd story inside, and this is a new Biz entirely.

It’s still the same square jaws and goofy kicking, still the same wired and aggressive body language, still the same odd splashes of colour. There is still plenty of devious energy and loads of evil sly looks and wicked grins and angry old punks spitting their anger at the old fascist enemy. There is also still some crazy exaggerated poses being thrown about, but it has all been suitably toned down, and the stories take place in a recognisably dirty England that is haunted by too many old ghosts, and defended by one cranky old git. 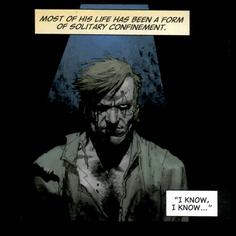 Because it’s also more restrained, with a newly murky palette from his colouring collaborators highlighting this restraint. All this craziness never comes at the expense of the story, and never overwhelms the tale it is telling. While this has been obvious in Young Bisley’s work, the ongoing dedication to just telling a well-crafted story is absolutely admirable. His storytelling skills have aged like a fine wine, and while that browner tone is the most obvious indication of Bisley’s evolution, it’s the panel-to-panel transitions that really show the maturity.

In some time travel-related parts of the current Hellblazer run, the reinvigorating shock of seventies punk is captured perfectly by Bisley (who would only have been a teenager at the time) in scratchy gloom. Kevin O’Neill did something similar to terrific effect in the dying pages of the most recent league of Extraordinary gentlemen, (although that example was particularly shocking after the psychedelic apocalypse in a London part). 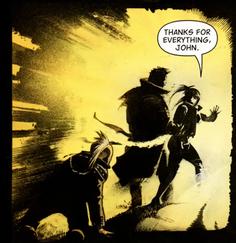 While Bisley is proudly part of a long line of British artist who specialise in the grotesque (which includes artists like O’Neill and Critchlow), he is still very much his own man, doing his own thing. It grows and matures, but it is always, always unmistakably the Bizness.
Posted by Bob Temuka at 9:46 AM

One of my favourite little winky in-jokes in Spaced is Simon Pegg's characters last name. Made funnier by the fact that when you see his artwork it's blatantly done by the notable Bisley clones (sorry guys) Jim Murray and Jason Brashill.