It’s incredibly easy to write off certain comic creators who have produced years of terrible work, with no signs of improvement in the near future.

After all, there are hundreds of comics published every single month – why on Earth would anybody ever continue to buy something they won’t enjoy, unless it’s for brand loyalty or sheer completism?

I never really gave up on Jeph Loeb, because I never had a lot of faith in him anyway. While his Halloween Batman stories have a lot of fans, they left me cold, and I could never get into the equally-lauded ‘coloured’ Marvel series or Superman: He’s Just A Big Ol’ Farmboy.

(Although any lack of enthusiasm I had was surely fuelled by the fact that I never really dug Tim Sale’s superhero art. Sale is one of those artists whose art is always a pleasure to read, but he just isn’t really suited to tights and fights.)

Many smart people say Loeb’s Superman/Batman run is just big dumb fun, but the dumb often overloaded the fun, and it had some of the most godawfully literal captions in comics. But then he started writing the Ultimates, and everything went horribly, horribly wrong.

While I still maintain a perverse interest in really bad superhero comics, Ultimates 3 and Ultimatum were a bridge too far, and were simply appalling awful. Muddled storytelling, ham-fisted shocks and characters that stopped acting like actual human beings left a bad aftertaste. An eagerness to offend was not balanced out by Marvel’s refusal to admit its Ultimate toys were totally broken.

And it looked like they didn’t learn everything, because they kicked off the whole line again with Jeph Loeb taking a leading hand. While it was comforting (and slightly disappointing) to see Bendis and Millar still doing their thing, nobody could have had much hopes for the Loeb comics.

I don’t know how the New Ultimates title with Frank Cho turned out, because I haven’t read any of that, but I did read Ultimate X in the past week, and was pleasantly surprised.

It was the Art that got my attention – you can’t go wrong with Art Adams on pencils duty. Adams has been producing his tight figures and fully-fleshed faces for 25 years now, and it’s as enjoyable as it ever was. It could be argued that his arrival on the comics scene in the mid-1980s was a direct influence on the artists who went off and formed Image, but we shouldn’t hold that against him, not when he’s drawing consistently beautiful work.

In fact, while Adams’ art in Ultimate X is instantly recognisable, it’s still come a long way over the years. His line is less craggy, with a softer flow that still barrels into his insane amount of detail. His ability to convey complex emotion in a furrowed brow is unparalleled.

So on that score alone, the Ultimate X-Men relaunch was worth a look. After all the other Ultimate Bollix, the fact that Jeph Loeb was writing it was a severe disincentive.

But even with years of bad form, you can’t write off anything without making some small effort to see if those bad expectations were justified. So I read Ultimate X, and think it’s one of the best things I’ve ever read from Loeb.

Because underneath all those stupid bombastics and blunter than blunt narrations, Loeb is actually a really good character writer, who can get to the heart of a fictional person with a couple of scenes and a poignant expression. Or a really satisfying burp.

Having an artist like Adams certainly helps, because he can actually draw proper human emotions, (something a lot of Loeb’s collaborators – especially on his Ultimate books - have been completely unable to do). But Loeb is also due a fair bit of credit for the pleasant reading experience.

There is still a bit of grabbing random characters and throwing them at each other like they’re action figures, but it keeps the cast reasonably tight, and after the carnage of Ultimatum, it’s fitting that anything goes in the aftermath. (There is also an odd nostalgic rush for all those late eighties What If…? stories where the X-Men were all slaughtered and a random collection of mutants were bought together to form a new team, especially when Loeb reaches out and tries to justify Bruce Banner as a mutant…) 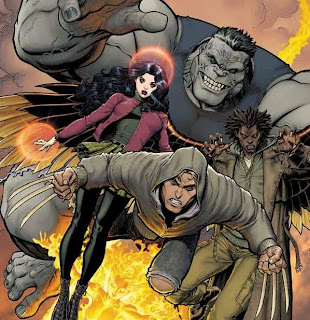 And while it is still clumsy, and there are still moments where people act more like plot movements than actual people, it ends without the usual brutal fisticuffs and takes its time to set up the cast. It might have a blonde pretty-boy teenager standing in as a Wolverine surrogate, but when he comes to Wolvie spawn, he’s still more charming than the try-hard Daken of the regular Marvel universe.

Ultimate X is not a great comic, or even a very good comic, but it isn’t that bad, either, and that’s more than you can say for almost anything else Jeph loeb has done in recent years.

Over at the Distinguished Competition, another writer (who also happens to have some incredibly strong editorial power) has also produced something surprisingly readable. Dan DiDio’s writing for the Outsiders title was nothing short of terrible, but his work with Keith Giffen on Omac is great fun. 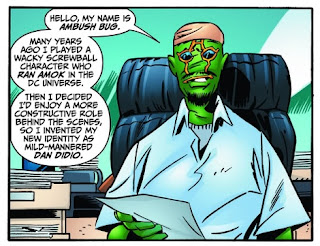 Like Loeb on Ultimate X, DiDio’s name on the credits of Omac was a severe disincentive, even though Giffen’s art is always interesting (and may help explain why it was the lowest selling of all the New 52 DC comics). It did seem unnecessary, as Giffen has proven his ability to be a solo scriptwriter over and over again, and it’s apparent connection to half a decade’s worth of completely shit stories about Omac (overseen by DiDio), was the final straw.

And then, astonishingly, Omac turned out to be a pretty good comic, and a large part of its appeal came from DiDio’s scripting. He’s ditched the heavy super-angst of Outsiders and cranked up the happy go lucky absurdity of an accidental superhero.

His clumsiness with narration and dialogue had a severely negative effect on any comic that made pretenses at real world relevance, but in the balls-to-the-wall rush of Omac, that clumsiness is absolutely fitting. Jack Kirby’s dialogue in the original Omac comics was not anything proper humans actually said, but it worked on things like Omac and Kamandi so well because these weren’t ever meant to be recognisable people of the 20th century – these were future people who spoke in wild gesticulations and massive amounts of exclamation points. If it don’t sound natural, it’s doing the job, and DiDio’s dialogue is many things, but it isn’t natural.

(Giffen is great and he ain’t no Kirby, but who is?) 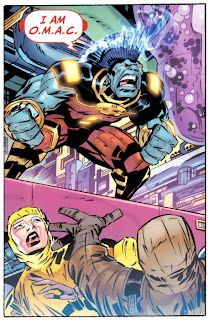 These bursts of readability from these two writers are not likely to last long – Ultimate X has already been superseded by yet another relaunch and according to the numbers, Omac is unlikely to last a year. (Hopefully it will end with somebody like Doug Mahnke coming in and drawing an abrupt final panel where everything blows up, because that would be Cosmically Awesome.)

There isn’t much faith in the future, either. It’s hard to imagine DiDio’s style suiting anything beyond loud and shouty punch-ups, and Loeb’s next major work is an Avengers/X-Men series that already shows a dedication to stupid by focusing on the – as demanded by nobody – return of Cable.

But to get anything worthwhile from either writer is more than could ever be expected, and should be savoured while it lasts.
Posted by Bob Temuka at 1:21 PM