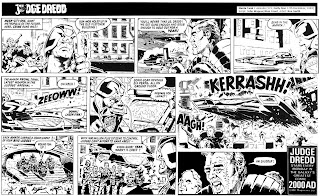 Although I always took the Judge Dredd newspaper strips for granted, and saw them as just another part of the massive and sprawling tapestry of Dredd's world, they really were remarkable feats of storytelling.

The strips that were produced in the 1980s - usually by the classic Dredd team of John Wagner, Alan Grant and Ron Smith - never showed up in my local paper, but were often reprinted in annuals and sci-fi specials, with a couple of luxuriously large and loose softcover collections.

I read some of them for the first time in years just recently, and they are something I just took for granted as a kid, but I was a pretty drokkin' stupid kid, because this kind of hyperdense storytelling is incredible. Each story has a set-up, action and punch-line, in nine panels. Ideas that were too thin for a full six-page epic in the weekly 2000ad had a perfect length in these one-page wonders, while important events like the world-changing Apocalypse War are dealt with in a quick 11 panels. 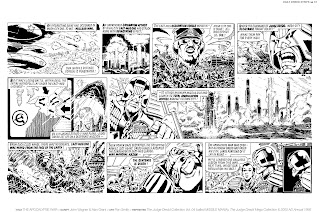 Wagner and Grant were also very, very funny, with terrific ideas laced with great jokes, all told with that black irony of Mega City-One. Crucially, very few of the strips are set outside the walls of Mega City One, because the writers know it's the city and its mass of citizens that are the main characters of the story - Dredd is just the straight man, who gets everything under control.

Smith's art also used every inch of the page, and the artist still found room for his characteristically weird angles and contorted figures. He defined the look of Dredd for a few years, and a heavy dose of these strips confirms that his MC-1 is the definitive MC-1.

Entire company-line crossovers don't have as many ideas as a handful of these strips, and there's no messing around. It suits the lean efficiency of the Dredd character to have some economical storytelling, just as the character is also suited to 45 years of incrementally slow growth. It's all Dredd. 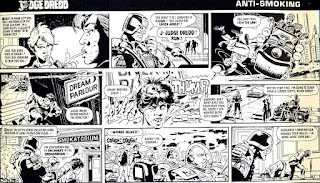