All the Avengers: Go hard or go home


Filming for the latest Avengers movie has now started, and even though some of the core cast could apparently only muster as much enthusiasm as a damp fart at the thought of spending hours upon hours yelling at green screen things, the long voyage of desperately positive hype for the grand climax of the Marvel movie universe has now begun.

The film-makers are promising its massive audience that this is really it, the big deal, and everything has been leading to this climax. It won’t be the end of the Marvel Universe, but it will be the end game it has been playing towards for more than a decade.

And even as the hype begins, the moaning and groaning about the unwieldy cast has also started, with plenty of cultural commentators already going weak at the knees at the thought of keeping track of a massive cast of characters, and about the inevitability of a crowded, superficial mess, bursting at the seams.

I say fuck that. I say bring it on. I say throw all the ingredients into the mix – the whole damn lot - and see what happens. After years of this shit, anything less would be a cop out. 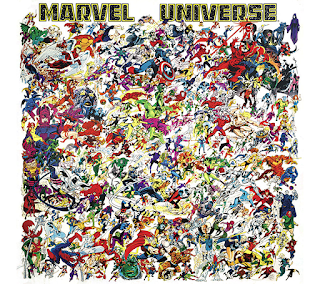 I enjoy the Marvel movies, even though they can, in general, be fairly mediocre when it comes to creating original storylines. There has been some great character work, some sharp dialogue and some terrific moments when all that dopey reality bounces up against something truly cosmic.

And their extraordinary success is fascinating - all these dopey concepts created decades and decades ago, finding a rich and lucrative new audience, and generating billions of dollars. All that dumb shit we used to read growing up is being watched by everybody on Netflix, and Doctor Strange and Ant-Man are actually, truly household names now.

It's a vast, sprawling saga. which has remained surprisingly focused, with a plot scaffolding spread across more than a dozen films, over 10 years. Sometimes it gets a bit clumsy, and you get Thanos floating on a big space toilet for no reason, but that's just the equivalent of the six panel sub-plot in classic Marvel comics, keeping Plot B ticking along while Plot A is being dealt with. What worked for comics works remarkably well in other medium. 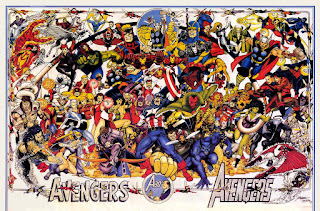 Still, the new Avengers film is going to have dozens and dozens of roles, with all sorts of characters crashing into each other, and it only takes a few seconds of googling to find hand-wringing hot takes on the amount of characters one movie will have, and how it's an obvious symptom of the death of cinema.

(They've been predicting the death of cinema for about 60 years now, but the fucker won't die.)

Anybody getting in a pre-emptive opinion right now will be hoping like hell they'll be able to say they told us so when it all goes tits-up, but if I had to make a prediction, I think the audience will be able to handle the large cast. It's not that hard. We can handle it. 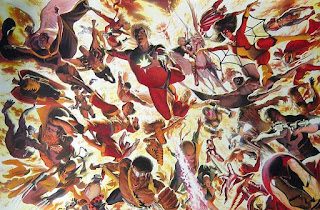 After all, even though superhero comic readers still struggle with a general perception that they are sub-literate morons, the comics have been doing it for years, with huge casts of characters. Even the most low-key crossover event features a huge cast of superheroes and villains, and anything less would be disappointing.

This has been going on for decades, to the point where it really isn't that big a deal anymore. Mark Waid's current Avengers comic had the modern team working with two other line-ups from the comic's past thanks to the usual time travel fun, and it's all so casual. Sure, you've got two Thors and several Captain Americas, but it's no big deal, because this goes down all the time, and there isn't any need to waste space going too deep into it. Just get to the point

Still, considering I've completely lost all fucking track of where the Marvel comic universe is going in the past few years, maybe that's not such a good example. I don't even know who the goddamn herald of Galactus is at the moment. 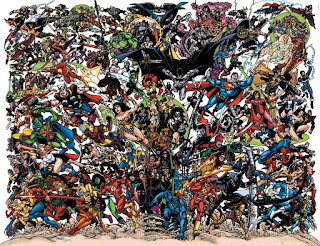 The thing to remember about these crazy, crowded movie events is that you're not going to get in-depth characterisation, or anything in-depth at all, and that's okay, because almost all of the characters have all got their own movies to get all their angst and emoting on.

After all these bloody films, you can hit the ground running. You don't need to spend half a film setting up the lead characters, they can just go hard out straight away. Again, this has been going on in the comics for years - the best Justice League of America comics have always been the ones that go from zero to epic in three panels, because there are plenty of Superman comics in to get some character depth from.

This does, unfortunately, create a good sign for the forthcoming Justice League, which wants the thrills of the Avengers team-up, without all that messy risk of giving these characters their own movie first, so any characterisation is going to come after the fact, or be shoe-horned into a big, ensemble film. Either way, it's going to have a negative impact. 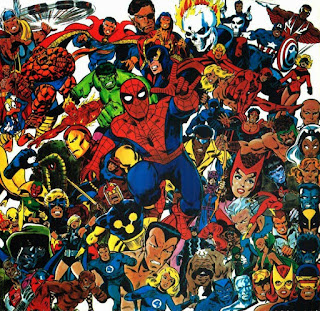 There will, inevitably, be complaints that giving everybody who has ever appared in a Marvel film a few seconds of screen time is just fan service, which I never understand, because it's not like Marvel characters are the sole reserve of dorks now. My Autny Val is a fan. She never understood my fascination with superhero comics growing up, but she'll watch the new Thor film, for sure.

There were the same complaints about the new round of Star Wars movies, because they were full of in-jokes and references that only apparently mattered to the hardcore Star Wars fan. Never mind that  more than half the fucking population of the whole fucking world are probably hardcore Star Wars fans, (even if they won’t always admit it), it's just easier to sneer at the nerds. 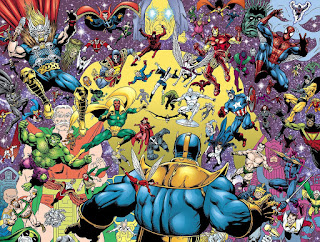 But I saw screw it. Chuck it all into the mix, all of it. This is everything that has been building since the first Iron Man and Hulk films. If there was ever an end-goal for all the dumb TV shows, and all the dopey movies, it's here. And if they're going to go crazy on cameo appearances, then go all the way, throw it all in, and see what happens.

There is no harm in giving the Agents of SHIELD three seconds of screen time, or seeing the Netflix Defenders doing their street level thing, even as the Guardians of the Galaxy are flying over their heads, while the other big guns get to flex and fight.

The unparalleled success of the Marvel movies is evident in all the imitators trying to get their shared universes up, (still a lot harder than it looks, otherwise everybody would be doing it), and this is the time to celebrate that success. It might come at the expense of some emotional depth, but this is not the film for that.

This is the film to go crazy. 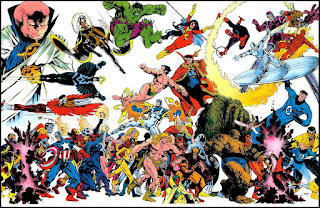 After all, anything less, anything that is held back for whatever reason, will leave a significant part of the audience feeling shortchanged. What is the point of holding back now? Why bother saving something for later?

Put it all out on the table, and get the barest taste of the sprawling, mad magnificence of Marvel's super-heroes. We can all keep up.