Love and Rockets: Do you know where your children are? 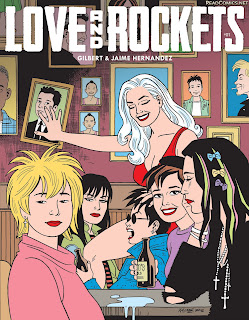 Love and Rockets has, in its fourth incarnation, returned to its original magazine format. It feels thinner than it used to, but we could probably all lose a little weight, and the content on its pages is just as substantial as ever.

After all, printing and paper technologies have come a long way since the last time Love and Rockets came in at magazine size, back in the 1990s. They don't need to shovel the ink onto scratchy paper to capture the fine line and heavy shadows of Jaime's stories, or to capture all the emotion in Palomar. The art is as crisp as it ever was, the backgrounds are bright white, and the subtleties of body language are just as clear.

So it doesn't feel as chunky as its first volume, but the latest incarnation of this consistently brilliant comic is still full of as much drama, love, comedy, pain, memory and beauty as ever. 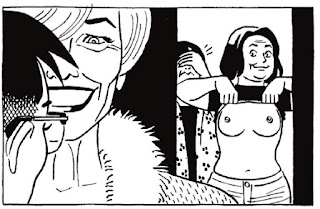 Besides, once that slender cover is cracked open, it's an immediate thrill to see the art is back to huge and glorious proportions. Both brothers have never shied away from packing as much as they could onto the page, no matter what the format, but the bigger size is beautiful, and really allows their art to stretch out and breathe.

There was - to be clear - still a hell of a lot of beautiful art in the smaller size of the previous volume, and it could often be used to great effect by these master storytellers: The Love Bunglers had a real claustrophobic and confined tone, squashed down into the smaller page. But these are comics that are born to breathe freely – the bigger the art, the more satisfying the thrill.

Even besides that lovely restored bigness, Love and Rockets always gets a lift from the format change. There is always a nitro blast of new energy in the storytelling, while still building on all that has come before. The new #1 is no exception, and has an easy air of modern cool.

It’s notable that Jaime – the eternal punk – is happy to break with the rhythm of the past few years straight away, by continuing the story started in the last two annual editions. For the past eight years, there have been clear two-issue chapters in each of his Locas comics, but the most recent two-parter, featuring a night of aching reunions and bottomless regrets, slips on through into this new volume.

If there is more to come still, at least this story of the events of a single weekend will be easier to handle when the next slender chapter in this story is just a few short months away, instead of a whole year. It’s much easier to keep things rolling without an annual hiatus. 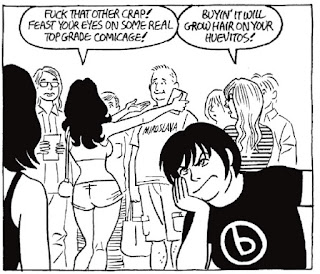 There are some big steps forward in the over-all sagas that the two brothers have been telling for decades now, and there is a bit of the usual goofy shit. It’s mainly from Jamie this time, whose sci-fi characters are ripping off alien penises and healing through the power of vampirism.

This stream of consciousness storytelling has always been a vital part of Love and Rockets, and is always welcome. They're never as thematically rich as the other stories, but are a necessary light counterbalance to all the heaving emotions.

But it’s the bigger pictures that still provide their ongoing sagas with a real punch. Stories that started 30 years ago are still paying off in weird and wonderful ways. 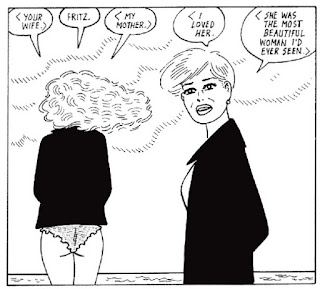 And, as ever, it's all about the ladies. L&R #1 easily vaults over the rigid restrictions of the Bechdal test, and is almost nothing but women and girls who are their own people, hanging out together as friends and family.

The only male to make a real appearance in Jaime's Locas or Tonta stories is a total idiot who pushes the girls around, and the main male characters of this long-running saga are consigned to pictures on the wall, in the background of the cover. This is the girl's story, and they don't need to be defined by the boys. They've got more than enough going on.

The women over in Gilbert's comics are having a rough time of it, but are still strong. The story is moving on, with a number of Fitz's successors appearing as auditions for the next chapyter of this generational saga, (although there will only ever be one Fritz, like there was one Luba, or one Maria, even if they all end up playing the same role). 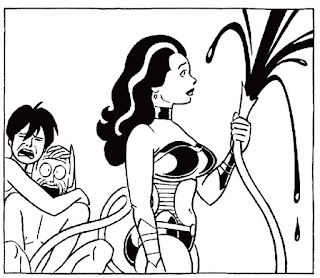 Seeing Love and Rockets back in magazine format is both comforting and fresh. It's a bit like going back to a school where you went as a kid, and finding that it's not as huge as you always remember, but still a little bit awesome.

But saying Love and Rockets is a little bit awesome is like saying the sky is blue. More than thirty years after it all kicked off, and it's just as sexy as ever.
Posted by Bob Temuka at 8:08 PM

I can't wait to see this. I am always looking forward to new work by Los Bros., even if some of Beto's recent work (e.g., Blubber) leaves me longing for stories Palomar.