Timeline: A life of comic books


This blog is what happens when you spend an entire life reading and obsessing over comic books.  This is a timeline of that life.

I don't remember the years by what jobs I had, or what houses I was staying with, or what people I lived with. They all blur and merge over the years. But I never forget the comics. 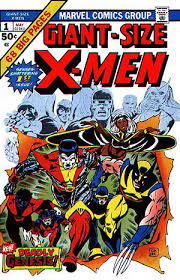 1975: Born in Timaru, on the arse end of the planet. Despite showing a total and unforgivable disinterest in comic books for the next three years, I appear in the world at roughly the same time that Giant Sized X-Men #1 is published, which is a fairly awesome portent of things to come. 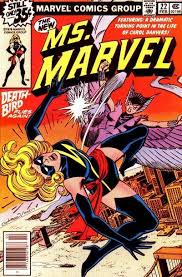 1979: First comics, (that I can remember). One is them is an issue of Ms Marvel where she beats the crap out of Deathbird, another is some really dark horror comic (literally dark, as I still remember the heavy and cheap ink staining my fingers) featuring an evil blonde vampire, and a third is Captain bloody Sunshine. But what do I know? At this age, I still think Superman and Batman exist in the real world. 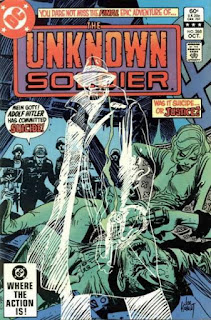 1981: By now, my Nana is working at a second hand bookshop with an amazingly large amount of comic books on offer, and I'm allowed to go in every Tuesday and swap a paper grocery bag full of comics for a new bunch, and that's how I learn to read. I don't need Jack and Jill, I've got Batman and Sgt Rock and the Dark Phoenix saga to learn from. The joy at realising I could understand every word in an Unknown Soldier comics is so huge, I can still feel it today. 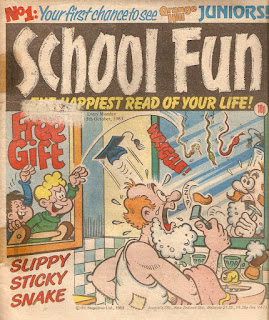 1983: Still a kid, and the best thing in the world is the British weekly gag comics, things like Buster, the sadly short-lived School Fun and Whizzer & Chips. (But definitely not the Beano or the Dandy. They were gross.) I was always a staunch Whiz-Kid, until somebody pointed out to me recently that we were probably all Whiz-Kids, because they had the prime colour cover section, which makes sense, now that I think about it. Plus all the Chips strips were shit. 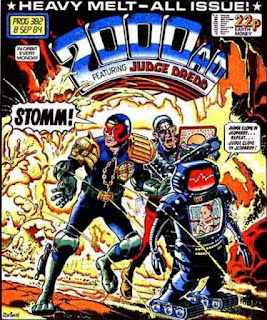 1984: The first great 2000ad obsession. I'd read the odd issue here ad there – the first one I can ever remember is the one with the first appearance of the Fiends of The Eastern Front, and I delight in showing my mates at school the cover of #302, where old Ben is a robot! - but it doesn't become a full blown obsession until here. It's some golden age 2000ad: Judge Dredd and Mean Machine Angel team up, drawn by the great Ron Smith; Johnny Alpha has been unfairly branded an outlaw in Strontium Dog, and Halo Jones in getting out. Thirty-two years later, I'm still getting the comic every week off the shelves of my local shop, and it's still an absolute pleasure. 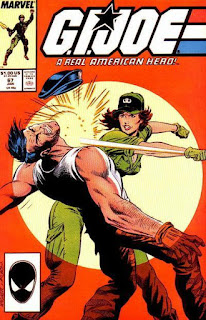 1987: While Watchmen and Dark Knight and Maus are blowing the world apart, I never even see them, because I'm still on the arse end of the planet. I'm also 12, so I'm far more interested in the X-Men titles, which are coming up to Peak Claremont, and cursing the fact that I don't still have those Dark Phoenix issues. I find my first ever comic shop, near the Dunedin railway station, and it's brilliant and scary and I'm looking for GI Joe more than anything else. At least I get my first taste of sophisticated suspense, when my mate Glen gives me Swamp Thing Annual #2 by Moore and Bisette, and it's the most amazing comic I've ever read. 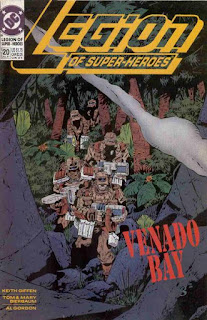 1990: This is the age of peak nerd, going through weird little obsessions that last about as long as my ever-changing hormones. First it's Excalibur, then the Infinity Gauntlet or post-Crisis Superman, then it's the New Bloody Warriors or the Legion of fucking Super-Heroes, or Excalibur again. I'm still getting up to the usual teenage bullshit – parties and drinking and girls and cars and all that, but there is still always a place for some four-coloured nonsense. I briefly think that I might be getting too old for these things about now, but I only ever think that once. 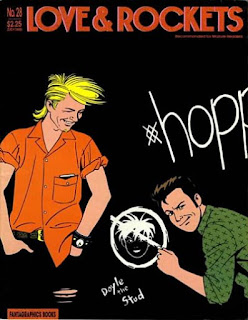 1993: By now, I'm a big, moody 18-year-old, which makes me just the right age for the birth of Vertigo comics, with a craving for something deeper, more stylish and more pretentious. The X-obsession fades away, and never really comes back, with years of X-rubbish to come. I also discover the glory of Love and Rockets, and spend one of the best summers of my life, sitting in the sun and trying to figure out how Ray and Maggie's relationship worked. 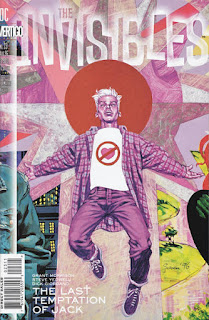 1995: I've quit getting most Marvel comics, although some of the slicker DC superhero comics, like Mark Waid's Flash work, are still addictive. More troubling, I've also given up 2000ad properly for the first time in more than a decade, because it's rubbish, although this will somehow become one of the great regrets. I don't care, for most of the nineties, I'm all about getting drunk and reading the Invisibles. 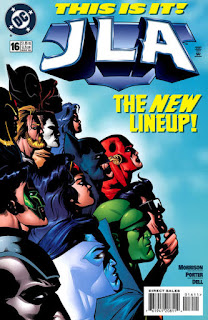 1997: After spending several years doing nothing more complex than spending a long evening downloading the trailer for the first Stargate movie down at the local University, I really get on the internet, and find people who are even bigger comic geeks than me, and the world is a slightly less cold and forbidding place. Things reach a peak when Morrison's new JLA team is revealed, and it all gets a bit fan-fiction for a while, but I'm still here. 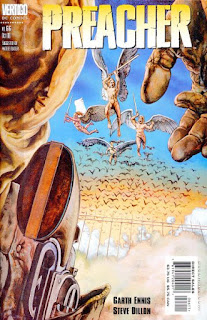 1999: For the first time in my adult life, I'm not getting any regular new comics, because I've moved back to a town with no comic shops. It's awful, and a terrible scramble to get the last issues of Preacher, and even my beloved Invisibles. 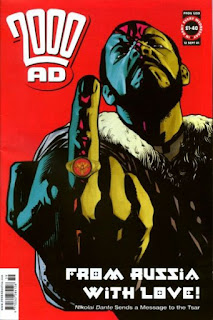 2003: Still getting the odd comic, usually through mail order, and have followed favourite creators onto things like the Punisher and The Filth, but I'm missing a lot. Takes me years to catch up on things like Planetary or the Ultimates or Frank Miller's DKR sequel (finally read it in 2005, divorced from all hype, and love it). There is also a sudden and unexpected return to 2000ad, driven largely by the brilliance of Nikolai Dante, and the strengthening of Judge Dredd under John Wagner's steady hand. Hunting out the issues I missed over the past decade is all consuming for a while, and I've still got holes in the collection. 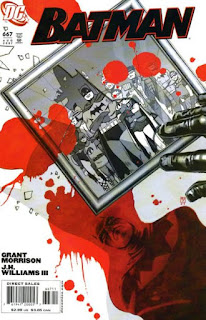 2007: After my first travel to see comic stores on the other side of the world, I'm back in a town with comic shops, and go a bit crazy catching up on the last seven or eight years. There is a lot to catch up on, but I'm struggling to find anything new to obsess over in monthly comics, other than Morrison's ongoing DC superhero comics. Same as it ever was. 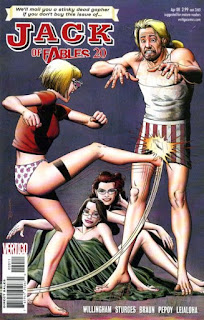 2009: Start the Tearoom Of Despair, in some futile theory that if I got all this shit cluttering up my head out and onto the page, it might free up some room. Things get awfully and shamefully personal in the next seven years, but it's still an enjoyable little ritual. I still get a particular kick out of writing about B-comics, books that are beautiful and entertaining, but nobody really talks about. Comics like The Boys, Jack of Fables and BPRD, which I all enjoy more than I really think I should, and love to talk about. 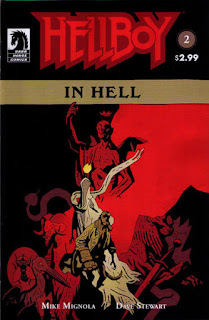 2012: Growing up, getting old. After years of a writer-focused mentality, things flip around and I go crazy for the artists, and find new rewards in the old stuff that I'd always ignored because of clumsy scripts. It's taken a shamefully long time to finally care about Kirby, but I get there in the end. This new attitude means I also finally get into things like Hellboy, almost entirely on the strength of the art. Conversely, it means I won't put up with mediocre art, no matter how big and clever the script it. No Providence, for example. 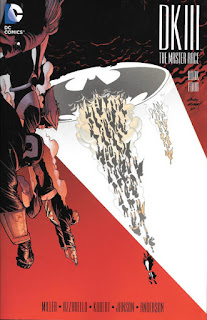 2016: Here, now. Still get 2000ad every week, and the usual mix of other regular comics like Stray Bullets, the odd superhero book, Garth Ennis war comics, or anything that Brubaker and Phillips is doing. I think the new Dark Knight series is all right. I still firmly believe that 2000ad and Love and Rockets are the best comics ever. I'm 41, and I'm never getting out of this mess.
Posted by Bob Temuka at 4:58 PM

Man, that was fun. A few questions and comments for you:

I (google) searched the Tearoom, and didn't see mention of GI Joe 21, Solent Interlude. Did that one cross your path at the time? Later? How did you react to it?

I think about my own X-Men days when I was in my teens, and how I got over it myself. There was a lot of X at the time, probably less than there is now, but I found myself drawn to The New Mutants more, in part because their age and problems seemed to mirror mine a little more (I mean, landing is such a problem when you are basically a human rocket, am I rite? Fellas? Fellas?) and a lot of it to do with the art of Bill Sienkiewicz. Still, I had some good X-Men work that I traded in for some bike bags when I was in my late teens, which I only somewhat regret.

You were on a Vertigo trip. I got back into comics with Transmetropolitan (which started as a Helix imprint, then moved to Vertigo). I saw you wrote about Ellis and the future, but did you wind up liking Transmet?

Nice timeline!
I too agree that Love and Rockets and 2000 AD (esp. Judge Dredd) are the best comics ever.

I was a couple of years too late for that silent issue of GI Joe, and back issues were almost impossible to find, so it was one of those things I only saw years later, after all its innovations had been ripped off by many lesser comics.

Transmet was fine, although I could've done without some of the lecturing. I think the kind of sci-fi Ellis is doing now in Injection and Trees is way better...

I was reading Trees, but gave up on it. Mostly because they killed off characters I was caring about with little regard for them after. Injection was good in the trade format. I got issue one, said "what's all this then," and decided to wait. When I saw the reviews of it, I dug into the trade, and I'm glad I did.

I loved Silent Interlude when it came out. I was not so steeped in "the way comics should be" that I thought anything was wrong, like many people seemed to at the time. I just enjoyed it.

Then again, I didn't realize at the time that there was such a thing as bad comics. I just thought all comics were good to lesser and greater degrees. :)