Everything is wonderfully pointless: Who's Who and Official Handbooks


I keep thinking I should chuck them out. They're just taking up precious space in our small spare room, and they're not even relevant any more. There are dozens and dozens of them, and when I go on a purge binge through the comic collection, they always end up on the 'maybe-it's-time-to-let-them-go' pile, before I chicken out and put them away again, until the next time.

They are two series, published by Marvel and DC in the late eighties. The DC one was called Who's Who, and the Marvel one was called The Official Handbook Of The Marvel Universe. They are catalogues, histories and data about the most prominent characters, settings and props of the main superhero universes.

They're 30 years out of date, and are obsessed with a continuity that has been rewritten four or five times since. They're totally useless in this 21st century, but that's just another reason why I can't bring myself to get rid of them. 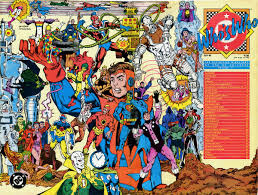 It's all about the context. Unless you're 70 years old, any new reader of the big superhero comics has decades of history to catch up on, and after years and years of ignoring the issue altogether, by the 1980s, things had got complicated, and needed to be catalogued properly.

There was a strong fanbase asking for this, desperate to know if Iron Man or Thor was stronger, or how tall the Golden Age Black Canary was. The eighties are the decade when the fans really took over the asylum, and were finally given the green light to put everything in its proper place.

Fanzine theories became canon and hidden histories were revealed, but I didn't know anything bout that. All I knew was that these series were full of background information from comics I never  thought I'd get to read, and my 12-year-old brain hoovered that shit up like it was cocaine. 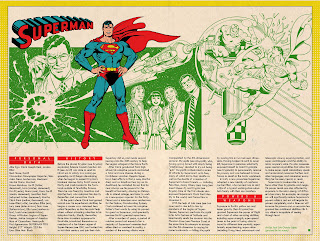 Who's Who came out as DC's continuity-shattering Crisis On Infinite Earths was still running, and there is some incredibly impressive back-pedalling in the earliest issues, as they catch up with a new status quo that was shifting literally every month.

Still, it had the task of setting the new reality, and original editors Len Wein and Marv Wolfman went about it with gusto, giving some of DC's quirkiest characters their first on-page appearance in years, and devoting a bit of space to even the most bizarre histories as everything was sorted out.

Despite some great art, the comics themselves were eye-searingly over-designed, and various experiments with yellow dots and bleeding colours sometimes produced pages that were almost unreadable.

But they were dense with fifty years of history, and covered everyone from Baron Blitzkrieg to El Diablo, and even the goofiest shit got in there. 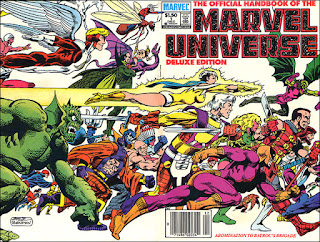 The Marvel version was, as the name suggest, more utilitarian, with less artistic craziness, but more text and information crammed into its pages. Marvel actually got there with this sort of thing first, with a Handbook series in the early eighties, but it was the Deluxe Edition, first published in 1985, that was the definite catalogue of Marvel's best and brightest.

With a greater focus of facts and information than its DC counterpart, the Official Handbook was absolutely dense with data, with little wasted space. Again, there were some nice character portrayals by some of comic's brightest star of the time, but the information was the thing.

And Marvel delivered – the Handbooks had denser history segments, and greater detail, right down to whether somebody engaged in light, moderate or intensive exercise. It wasn't perfect - by some glitch, they kept under-powering Iron Man by 90 per cent – but it was some beautiful detail. 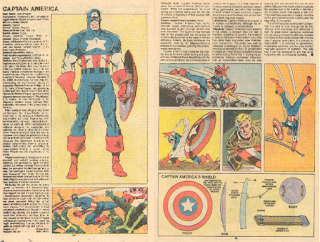 After all, there are some hidden truths of the time they were published, like how much they care about recent things – characters that are largely forgotten now get detailed entries, just because they were flavour of the month 30 years ago, and some of comic's biggest characters today get little more than a footnote in the mid-eighties.

They also show that while superhero comics are still primarily a boy's medium today, we've come a long way, because these things are packed to capacity with straight white men, and few characters of any colour or creed other than whitebread. They're not being blatantly offensive, it just shows how colourless a lot of characters were back then because that was the way they always had been, but it's certainly noticeable now, especially when males outnumber female character entries by 10 to one, and it's a good reminder that we could still use a few more different perspectives. 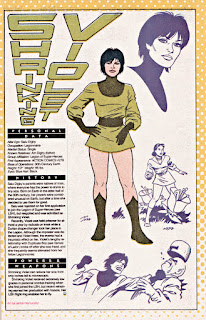 I read these comics to pieces in the eighties, and still get them out again now, to remember the strange and obscure characters and worlds. They've both been mined by their parent companies for anything useful over the past three decades, but there are still some delights to be found in characters that have slipped away in history.

There were a couple of update series towards the end of the eighties, and then the whole thing was reinvented and over-designed to death, just like everything was over-designed to death in the 1990s. And now we've got Wikipeadia to find out everything we need to know, right down to the slightest details, and there's no need for them now. But they were crucial for their times. 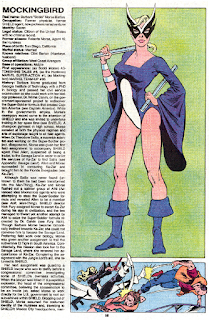 They also had some terrific art – even with the appalling polka dots, the DC pieces were artistically stronger, with montages showing a character’s history, while Marvel favoured blank backgrounds and a focus on the actual people and props. But both of them attracted unusual artists, and you'd find somebody like Jaime Hernandez doing the spunkiest legion of Super Heroes or Curt Swan doing one of Marvel's Superman analogues.

The first issue of the Handbook alone has art from Byrne, Cockrum, Buscema, Ordway, Smith, Simonson, Zeck and Steve flippin' Ditko. But DC went better, with the young stars like Gibbons, Giffen, Bolland and Perez kicking out some killer images, while Kane, Kirby, Kubert, Swan, Orlando, Infantino and Garcia-Lopez brought decades and decades of experience on incredible cover designs to their character pieces.

These publications were full of beautiful art and silly trivia, and I still care about this shit to go back over it, again and again. Somebody has to, right? 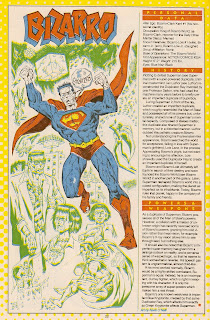 The pages are starting to yellow, and the data is getting more and more pointless, but that just makes it even more attractive. Caring about superhero universes is the ultimate in pointlessness anyway – because let's face it, true believer – because none of this shit really matters.

But if you're going to pretend you're going to give a damn about pointless shit, than you might as well go all the way. I can try to justify it with art appreciation or shameless nostalgia or anything like that, but the fact that these things are so obsolete is really appealing.

The Who's Who and Official Handbook comics don't really matter any more. That's what makes them so great.
Posted by Bob Temuka at 10:29 PM

My love for these books, specifically THESE editions of Who's Who and OHOTMU, know no bounds. Keep the flame alive!

I loved those DC Who's Whos and I've still got mine, too. I was way less interested in the Marvel Handbooks, which seemed to be celebrating their homogenous shared universe; the DC ones were celebrating the actual features, and by extension the cartoonists who produced them, far more, by including logos and mixing up the art styles. I don't think I ever read the text. I just loved looking at them.

Currently a pile of both Who's Who and Marvel Universe in the bathroom (still looking for some of those Official Marvel Indexes)and love flipping through them, playing guess the artist and reading the occasional entry, which are also getting harder and harder to read with age). Great piece, thanks