This is the six hundred and sixty-sixth post at the Tearoom of Despair, so it's only right and proper that I should dig about in my cupboard of secret shame, and find something a bit satanic. Something a bit heavy.

Something a bit metal. 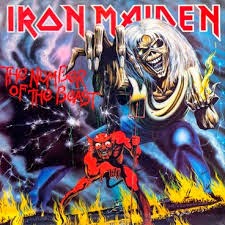 I was a little headbanger in my mid-teens, and so were all my mates. If it wasn't chunky, we weren't interested. I still liked the odd Pink Floyd or Queen or MC Hammer tune, but I craved that pounding, driving, thundering metal beat.

I had the obligatory mix tapes full of Slayer and Black Sabbath, I had the scruffy denim, I had the sneer at conformity, and I might have had a mullet. It was the late eighties, which isn't much of an excuse, but it is all I got.

I got into heavy metal through the safe hands of mid-period Def Leppard, and soon found my own favourites in the world of metal. Despite finding my was in through Armageddon It, I really wasn't much for the hair metal rubbish, (even with a shameful soft spot for Poison), I liked it heavy and intense and pure. No limitations, just real rock.

There were weird omissions – I never really got into Metallica – but I liked the churn of Megadeath and the parts of AC/DC where they really showed off. I raced after the driving rhythms of Anthrax and – oh man, I honestly hadn't thought about this band for twenty years until this morning - pounded my head silly to D-A-D. (Which brings us back to the hair again. I could never get away.)

But most of all, I was all about the Iron Maiden. How could you not be? 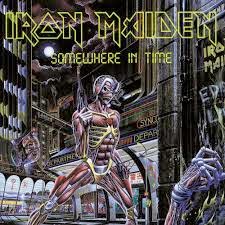 Iron Maiden had the most thundering riffs, the most glorious album covers and the ugliest drummer in the entire history of music. They managed to Keep It Real while still being incredibly pretentious – their Rime of the Ancient Mariner is still magnificent, for a bunch of working class blokes.

Born in East London during the great British metal boom of the early 1980s, Iron Maiden was built on Steve Harris' none-more-metal basslines, chugging away through every one of their great tunes, and soared to new heights through the fantastic wailing and extraordinary charisma of vocalist Bruce Dickinson.

And the group brought a much-needed taste of silly theatricality to the metal scene, thanks largely to the use of the greatest mascot ever. It was a wonderful combination of monstrous art and chugging guitars. 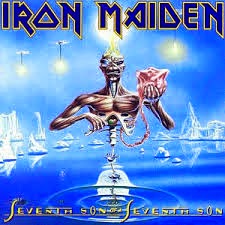 I fell for the Maiden. I fell hard.

I saw the cassette copies of Seventh Son Of A Seventh Son on the shelves of the Deka store in Dunedin and I thought it was the most beautiful thing I'd ever seen, and I somehow convinced myself that it was some sort of key to a strange world, away from the mundane reality I was stuck in. I was only 12, and only a 12-year-old boy would think that an Iron Maiden album would reveal the secrets of the universe, but I really fucking liked that cover. 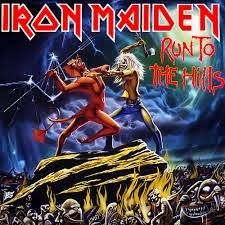 And it got inside my head.

I'm sitting in a school hall, waiting for an exam to finish, and it's sometime in 1989, and I've finished, but I can't leave the hall for another ten minutes, so I sit there and scrawl out the lyrics to Run To The Hills on my notebook, and I'm surprised to realise I know all the words, without bothering to try and remember them.

Ten years later, I'm catching up with my mate Spook for the first time in ages, and we get wasted in the Port Hills, and then cruise around Christchurch, and Run To The Hills comes up on The Rock radio station, and we rock out, and fuck me, I still know all the words.

Seven years after that, I'm in a karaoke bar in Osaka, belting out Run To The Hills after getting smashed on sake and oysters, and I've only been married to the lovely wife for a few months, but I can tell she's impressed by the fact that I don't need to read the lyrics on the screen, and can do the full metal performance. 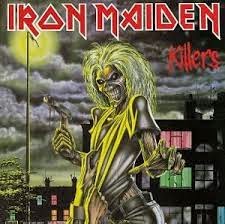 For a while there, everyone I knew had at least one Iron Maiden tee-shirt, or an Iron Maiden poster on the wall, even if they really didn't care for the music, because the artwork was so fucking cool.

This was the other great secret of Iron Maiden's success – they had, by far, the coolest album covers. All featuring the mighty Eddie The Head and all created by a bloke called Derek, Iron Maiden's album covers in the 1980s were portals into other worlds, realities of sci-fi madness and horrific gods.

Some of the single covers were gross and tasteless – we all hated Thatcher, but we didn't want to butcher her in the street – but the album cover art was sublimely mental. 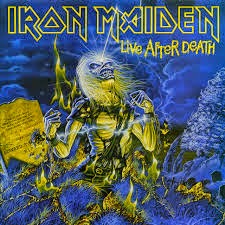 The covers even come with their own little satanic symbol (that I still know how to draw perfectly), and they all starred Eddie, the group's decaying, grinning mascot.

Eddie goes through a strange evolution over the eighties – starting off as a punk nightmare, growing into a cyborg nightmare, evolving into something godlike, and moving into the realm of weird, incomprehensible supernatural.

Those images were visual crack for young teenage boys, and all my mates plastered their bedroom walls with Somewhere In Time and Aces High posters. I wasn't allowed to put posters on my wall – they were banned after an earlier incident involving some 2000ad posters, some cellotape and some wallpaper – but I still had half-a-dozen tee-shirts, and proudly wore my favourite Live After Death one underneath my proper shirt at my high school formal ball.

I grew out of metal, like most of us do. We grow up, our tastes broaden, and we move onto something new. After a while, all that metal chunkiness gets monotonous, and you look elsewhere.

I even gave up on Iron Maiden, not long after No Prayer Left For The Dying. Even the art work was becoming a bit safe and predictable, and I wasn't surprised to recently learn that they started using new artists around the same time I became disinterested, none of whom could match Derek's earlier efforts. (They even lost Bruce for a while there, although they sorted that out.)

But I still love living to those old albums that blew my tiny little mind. Powerslave turned  30 this past week, and it's still an absolute blast, after all these years. Eddie's Egyptian death stare still glares out of that glorious cover, and the title song is still just a tiny bit more complicated than it needs to be, and that Ancient Mariner is still spooky and epic.

It's also still a bit silly, but that's the whole point.
Posted by Bob Temuka at 10:29 AM