The night I met the Big Red Cheese

This is a story about the time I met Captain Marvel. It might not have really happened, but it's a true story, all the same. 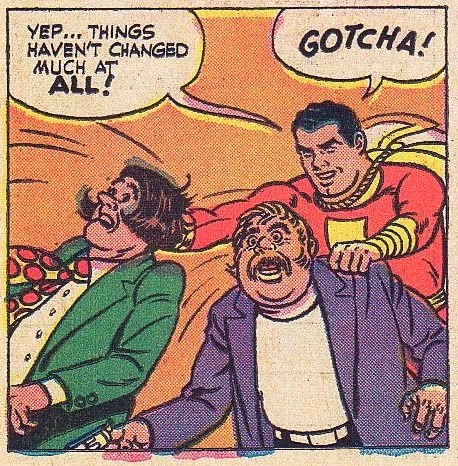 It was a Saturday night in the late nineties, so I was drunk as fuck. I was always drunk as fuck on Saturday nights at that time in my life. Early twenties and cracking under the pressure of sudden adulthood and a growing fear that I had no idea what to do with my life, but none of that really matters if you party hard enough.

This is hardly unique, and most of my best friends were barely functioning alcoholics at that age. Almost all of us grew out of it, if only because the hangovers were getting worse and worse.

This one night was typical – I was flatting in Dunedin, and it took a lot to get me properly wasted, so I would pre-load on scrumpy cider and vodka 'n' lemonade and Invisibles comics at home before hitting the bars and clubs for a night of drunken oblivion and bad dancing. 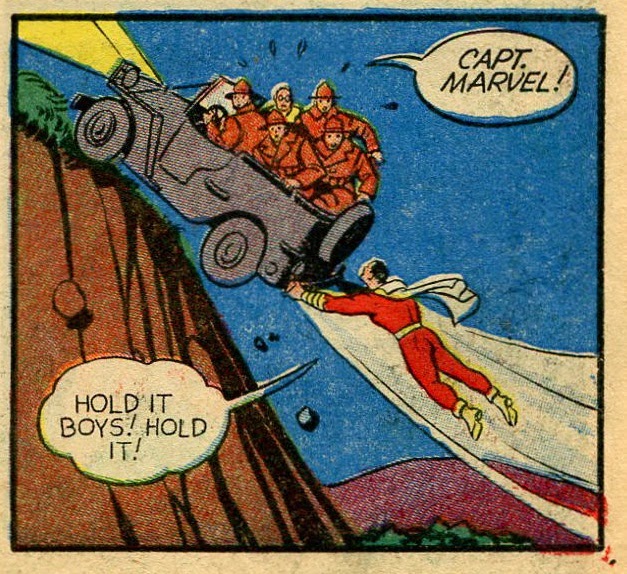 Sometimes that long drunken walk home was a little too long, and I ended up getting very good at taking quick, booze-fuelled naps in dark corners on deserted city streets, hunkering down in doorways, or under bushes, or up in a tree. Looking back, this is fairly pathetic behaviour, and I'm not proud of it, but that's just the way I rolled at that time.

This one night, it was pouring with rain, so I didn't even get out of the centre of town, and at some point I wandered down a short alleyway and took refuge under a car port just 20 metres from the office where I worked, waiting for the showers to pass, and indulging in a little easy unconsciousness while I waited.

I don't know how long I was sheltering there, but when I came back to my senses, it was very, very late. The rain had stopped, the only sound I could hear was somebody playing a Beatles album somewhere far away, and Captain Marvel was standing in the incredibly dim light, his smile beaming as he looked down at me. 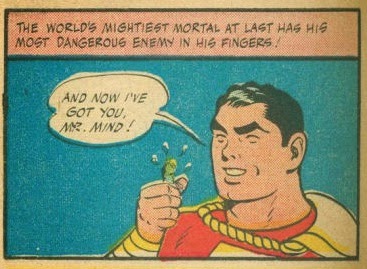 Even at that time, as fucked up as I was, I knew this was just some drunken hallucination/dream. But for a good two or three seconds, he was as real as anything else in the world.

It was Captain Marvel. The world's mightiest mortal. The Big Red Cheese.

He didn't look like a character drawn by a human hand, but he didn't exactly look like a real person, either – he was somewhere in-between, like heavily stylised CGI. He was massive, with a big barrel chest, and his hands on his hips. He had an easy smile, and he wasn't judging me. He was just watching me.

Things got a bit hazy then, the vast amounts of alcohol messing with some of the brain's highest function, and when I pulled it together again, he was gone. There was no sign he'd ever been there, other than my memory. I got my shit together and walked the rest of the way home. 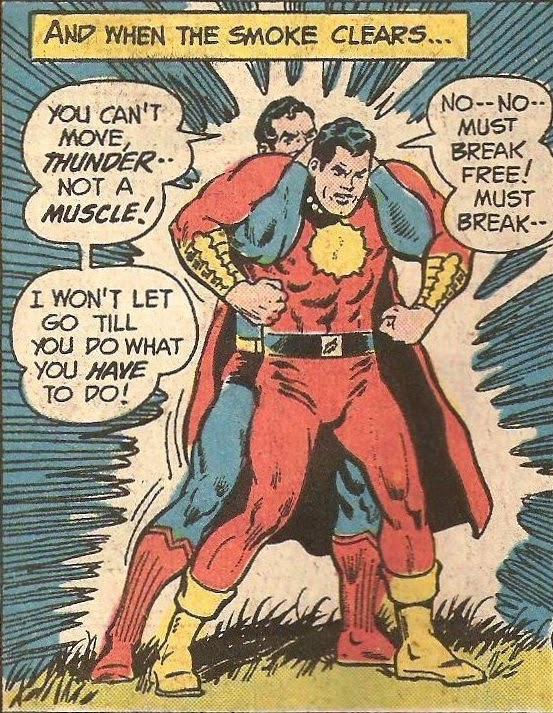 To this day, I have no idea why it was Captain Marvel that showed up that night. Although I'd already been reading comics for decades by this point, I'd never read much of the hero's adventures. I'd never read any of C C Beck's wonderful little dramas, or any of the recurring reinventions.

As a kid I'd seen him pop up in the odd Superman comics, but I found something slightly offputting about him, and I could never really explain why. It might just have been the fact that those stories were deeply average, or the fact that he was sometimes called Captain Thunder, or it might be just because I really didn't like that stupid little cape, but Captain Marvel wasn't for me.

Kingdom Come had just come out at that time, and Captain Marvel played a large part in that, but he was just a total dick for most of that. I did like his brief appearance as a straight man in the Justice League International, but he didn't last long there. And I did have a couple of random issues of Jerry Ordway's Power of Shazam lying about, but no inclination to go get any more.

In fact, the only thing vaguely related to Captain Marvel that I really gave a shit about was the modern Miracleman, which veered away from the bright, clean world of Billy Batson and chums a long time ago. Other than that, Captain Marvel was just another face in the big crossover crowd scenes. 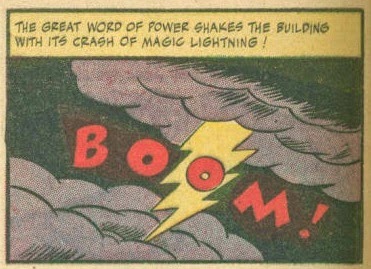 So he meant nothing to me, but that's what my brain pulled up to confront me in that car port, on that wet Sunday morning.

I have the absolute clear memory of something that probably never happened, I was barely conscious, heavily intoxicated and I'd probably been reading some Flex Mentallo earlier that day. (It was the best reading material for pre-loading). It was nothing but mundane hallucination and I have no idea why it happened to be Captain Marvel.

But I do know this - he wasn't judging me, he was just watching me, but I still felt like I'd disappointed, that I really was just a dumb piece of shit, passed out in a car port on a cold night. If I ever really was going to meet a real super-hero, I'd like to meet him at my best. And man, that was not my best. 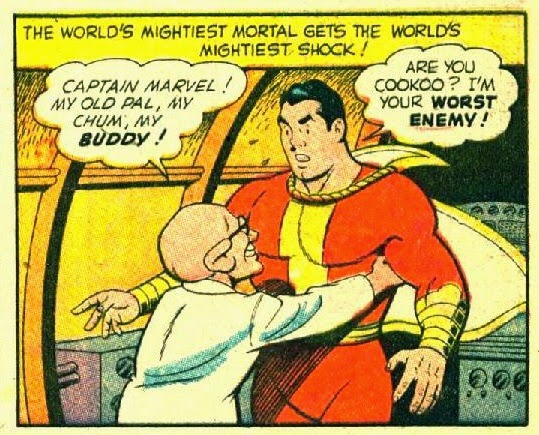 I didn't change my ways for a few years yet, and things even got a little worse for a while, but I grew up, like we all do. I didn't turn from a crippled nine-year-old boy into a grown man with incredible power in a flash of lightning, I went the long way round, just like everybody else, but I grew up in the end.

If I meet Captain Marvel again, I won't be so ashamed. I'll probably be just as confused, but I won't be ashamed. 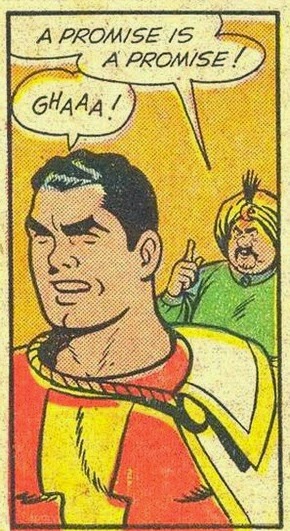 I also met Superman and Batman when I was a lot younger, but that's another story altogether.
Posted by Bob Temuka at 8:02 PM