KS: Another thing about the spoken word pieces and the virtues, or not, of adapting them-with some small regard to Mr Eddie Campbell's work (which, I hasten to add, I really, really like too.)

Jim Woodring once explained in the TCJ why he thought it was difficult for comics to engage in a manner as deeply or directly as a really good novel. Basically, he felt that when a novelist describes something, even something as simple as a table, we are bringing something of ourselves to that table when we imagine it. When we see a table in a comic it is the cartoonists table we are seeing. There is not quite the same personal connection.

For a work like The Birth Caul which was 'just' words and voices, until good fellow Eddie Campbell picked up his pen, there is a tremendous power in those limits. Moore is talking about the very stuff of life here. Fucking and conception and birth and death-the whole shebang. When you bring yourself to that, when you strain your imagination to render those words into understanding and personal interpretation, then I think your pushing at the very edge of yourself, making yourself bigger. That's good.

BT: I get what you're saying about the spoken word pieces and how they force the imagination into bigger and bigger spaces, but comics are still my favourite medium, and it's in that weird space between writer and artist that I like so much (even if it's a single writer/artist).  A comic story isn't a story until it's been drawn, and the artist has to interpret and edit the tale. There is a certain amount of laziness in letting Eddie Campbell supply the visuals for Snakes And Ladders, but he also sells the pain of Arthur Machen, falling into black waves of despair. As much as I love Vocie of the Fire, and as much as I'm looking forward to Jerusalem, I just like the stuff with the pictures more.

Which brings us back to the Jimmy's End films, and the collaboration thing, and I think it's really funny that he has more direct collaborators in this - including Jenkins, the cinematographer, the actors, and everybody down to the tea boy - than anything else he has ever created, but it also feels pure MOORE in a way that his comics mostly aren't, and his stage presentations are.

I guess the whole point is that everyone involved, from the director through to the fans who put money into the Kickstarter, is in awe of Moore and his work, and want his vision to get on a screen without any compromise. I assume that many of the creators only got involved in the first place because Moore was on board, and I know that the vast majority of the people who do sit down and watch these films are only doing so because they have enjoyed Moore's past works. I know that's why I'm here.

Because Moore's stuff is almost always worthwhile. There have been a few comic projects that have been inevitably sundered by shite art, and a couple where he really didn't put any effort into it at all, but for the most part, his comics, prose and stage shows are incredibly thoughtful, emotionally rich and downright clever, and I have no hesitation in putting these new movies in that latter category.

For people who don't like Moore's work - and that's perfectly all right, because it's different strokes for different folks - I imagine these films will be tedious and self-indulgent, but I think they're just super.

How would you rate them in the Moore Pantheon?

KS: So far I'm rating it pretty high. I'm thinking at this moment somewhere just below Promethea, which ranks in turn below a couple of the spoken word pieces, V, Unearthing, From Hell and Voice of the Fire. So, maybe, somewhere in the top ten?  For a final decision I'm waiting until I see 'His Heavy Heart'.

Before banging on about something I haven't seen I thought we should touch on one of the other successful collaborative relationships that contribute so much to the films - the songs. I like them. They are an essential part of the rich atmosphere of the films. As Alan and Mitch tell us, in one of the promotional videos or interviews that are out there, the films music is all diegtic.

That is, sound that originates within the environment the characters are in. If we can hear so can they. At times this makes for a slightly muffled soundtrack but it also makes for richly atmospheric moments. Check out the part when Jimmy enters the club and is walking down that awful piss yellow hallway.  Strains from 'In the Past Again' echo around him, drawing him deeper into the story and onwards toward his impending fate. It is creepy and unsettling in no small part due to that ominous serenade.

The song also serves as a nice overlap with 'Upon Reflection'. In that nasty little short the song begins in the bar just as Matchbright starts to brutalise Faith and marks the point, somewhere else, that Jimmy enters the building.

Surprising, when you get to hear the songs unimpeded they are lush, romantic and melancholic. I suspect that they get closer to the heart of what Moore is seeking to evoke/impart than the surface level of the films does.

"Every song I hear on the radio,
sounds like something from before.
Different words and different scores,
but much the same.
And the ghost of the times I had back then,
they still follow me around.
Those dead old melodies,
it's like their haunting me,
and won't let the present be."

Crook and Flail, the producers of the material, the music wranglers, do a superb job of realising Moore's words. I have no idea of how much they talked to him before beginning the process but this isn't the first time they have worked together  and I suspect they are in tune enough to go it alone or with minimal guidance.

As for 'His Heavy Heart', I'm real keen to see it. The Kickstsarter site tells us:

2. There is a smiling man with an inappropriate personal soundtrack

3. Traditional rules and regulations of processes are observed.

Apparently that last bit involves Egyptian funeral rites so it's probaly not for the faint hearted.

I'm really not sure what to expect. Given Moore's public musings on the nature of space and time it's possible we can expect some sort of return to the start of Jimmy's mis-spent existence but other than that I'm not so sure. 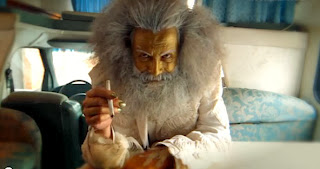 TOMORROW: BUT WHAT IS IT ALL ABOUT?
Posted by Bob Temuka at 9:11 AM