A colossal cavalcade of current comics


I started reading comic books when I was three years old and I'm still reading 'em now, and in all that time, there have only been a handful of days when I didn't read some kind of comic book.

I really think I couldn't live without a regular comic infusion. So I have to buy more and more and more. Like these ones.

I saw the ad for Superman: The Earth Stealers a thousand times in late eighties DC comic books, but I only got around to reading the darn thing last week after finding it in a dollar bin, and it was just as stilted as I always thought it would be, although there were still some bright spots.

It does feature Curt Swan art, at a time when he was well entrenched in his final, ultra-stiff style, and it doesn’t mesh that well with John Byrne’s slightly-more-extreme-but-only-slightly eighties Superman – there is one moment where an alien creates a projection of all Superman's family, friends and allies,  that would be a big over-designed and important double page spread these days, and they're all just standing there, chilling out like it's a 1950s cocktail party

But the clash of art and script does reach a point of beautiful absurdity, when Superman gets into an argument about life itself with an alien nihilist, where Supes argues that the transience of human lives is what gives them meaning, and the alien believes that all existence is pointless and that oblivion is the only way because we're all inconsequential in the grand schemes of things, and this Ultimate Nihilist is this pudgy little alien with a space-handlebar moustache and a ray gun on his hat.

Superman comics have always taken themselves a bit too seriously, and nobody took them more seriously than eighties comic creators, but the beautiful silliness of it all is still there to be found in a dollar bin, lurking under a ray gun hat.

The last few issues of Daredevil have been excellent, just as Mark Waid's entire run has been. They're still some of the most clever, stylish and witty superhero comics around, which shouldn't be much to ask for in a comic book these days, but is still, somehow, a rarity.

There is just enough goodwill to keep me on board when the series re-starts from another number one soon, even though that would be a terrific jumping-off point, especially when the only reason for a new number one is the need to sneak in a 33% price increase. It's not easy to pretend the big comic companies care about anything more than the bottom line, when a title is given a fake #1 just so they can raise the price.

Although - I don't know what I'm really complaining about, since I got the second issue of the latest Shaolin Cowboy comic the other day, and it was in that nine-buck range, and it's deeply, deeply unsatisfying on any kind of plot level, since it consists of nothing more than the title hardcase slicing his way through a crowd of zombies.

Page after page of a chainsaw on a stick, and decaying bodies coming apart in new and various ways. No dialogue, no deviation in panel layout, no real story.

It’s fucking magnificent. By the time you realise the issue is going to be nothing but zombie-stomping, it’s already outlived the joke, and then keeps on going, with dead hearts being punched out of chests and new bits falling off thoroughly dead people.

I’m getting more and more interested in spectacle and style over plot and script as I get older, and Shaolin Cowboy is the perfect example of this. It’s nothing but spectacle, and it’s fascinating to watch the various ways Darrow does the same scene over and over and over again, to the point where the single sound effect – the sound of the chainsaws – across the top of the page becomes heavy with meaning.

I also like the way all the zombies have tattoos. 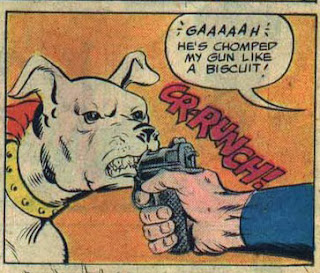 The nice thing about wandering into a Dunedin second hand bookstore and finding stuff like a British hardback annual of American super-comics from the eighties is that these things are often stuffed with secret delights, like a short story written by someone like Moore, or Morrison, or Milligan, jobbing it out before the proper DC came calling. Those things never get reprinted, so it’s always a delight to find them.

The Official Superman Annual 1986 has some late pre-Crisis Superman fun and a random Legion story, but it also has some Milligan and some Morrison, and the latter is some prime Morrison Supes.  It features a bunch of criminal geniuses dialling directly into Superman’s unconscious and trying to find his innermost fears and secrets, only to be undone by a bit if super-jiggery-pokery.

As one of the earliest examples of Morrison entering the ever-evolving DC universe, the story could be read as an early sign of the themes that would come to overwhelm his work. The villains are brought down by their inability to see any dream images as anything but metaphor, blind to the possibility of the literal. They take a ride into the imagination, which allows them to see inside the mind of a living creature, while callously mis-reading the results. It’s possible to see the dichotomy between the real and the imagined, and the literal and the metaphorical, throughout Morrison’s most esoteric work, and he delights in switching sides on the argument between stories, leaving any long-term reader bewildered by the higher implications. The dream machine could be the dream in which Morrison’s entire DC career existed, and still exists, in a space between nothing.

Or it could just be a short story about a big green dream machine, done for a forgotten annual, with a daft joke about Krypto. 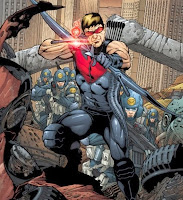 I bought a hardback copy of Ultimate Comics: Hawkeye at the same place because it was going cheap – for the same price as a new single X-Men comic - and because I keep wanting to like Jonathan Hickman’s comics, because people much smarter than me keep telling me they’re so good, and I was really getting into it, and it was a groovy little story, with some slick art, and then it turned out to be just a prologue to something much bigger and more complicated, and I stopped giving a fuck about this comic right about then.

Hellboy: The Midnight Circus is an even slighter hardback than the Hawkeye book, clocking in at a mere fifty pages or so, but it's infinitely more satisfying, largely due to Duncan Fegredo's wonderful artwork and Mike Mignola's confidently sparse plot.

It's the most obvious story for a young Hellboy - he runs off to join the circus, only to find it full of mysterious ghosts and demons, as well as a glimpse of his own terrible destiny. But it's a moody bastard of a story, with Fegredo often using dark, washed-out tones to portray a supernatural gloom, and then often glowing lights in the darkness, throwing everything into sharp focus with Fegredo's shaky detailing sparking up again. Everybody knows how good Fegredo's Hellboy art is by now, but it remains as breathtaking as ever, and makes The Midnight Circus a thoroughly satisfying book, even with that meagre page count.

I'll take that kind of quality over quantity any day.

I always like things like skip weeks events, because they tend to be tight and self contained, and a place where bold new voices and eyes get to strut their stuff.

But there have been so many of these kind of things, I somehow miss entire events. While I like the fact they're pretty inconsequential, it also means they're very easy to skip. Take the five Mighty Marvel Western comics, which came out in the summer of '06 - I'd never even heard of them until I saw them very recently.

Which is a shame, because they're pretty good comics. They're western anthologies, a combination which may see many comic readers instinctively recoil away, but there are short, punchy stories by the likes of Slott & Barreto, Giffen & Allred, Parker & Coker and Englehart & Rogers, backed up with a healthy dose of Kirby classics and lurking beneath some lovely Eric Powell covers.

They're mostly short and snappy revisionist comics, taking some old character and giving them a 21st century spin. Happily, this doesn't always been they have to be grim and scowling - many of the creators still find a healthy sense of fun in all this lust in the dust, and that ain't always the easiest walk to walk. 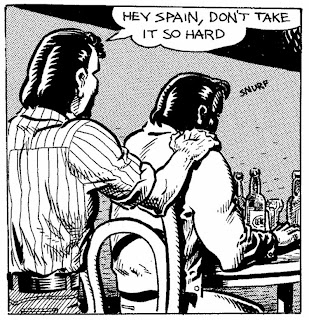 Autobiographical comics started getting a bad rap in the mid nineties, after one too many comics about the existential horror of picking the right flavour of breakfast bagel, but if an idiosyncratic artist has interesting stories to tell about their life in times gone by, I'm always interested.

Spain Rodriguez had some stories to tell. I was always a little intimidated by Spain's seething rage and clumsy anatomy, but his Cruisin' With The Hound book, which I only stumbled across this week, is a beautiful little slice of autobiography

Published by Fantagraphics last year and bringing together all sorts of autobio work from Blab and Zap and Comics Journal special things, Cruisin' With The Hound tells the story of the shenanigans that Spain used to get up to as a proud teenage delinquent in 1950s America, and the freaks, geeks and happy losers that he spent his time with.

It's not just a snapshot of a particular time in American history, it's a book about a particular attitude in American history - the rebel who hates being told what to do, and will only find freedom when all the stale aspects of modern life are burned down. Spain's autobio comics are all about that anarchic freedom, and that energy is splashed across every page, even as the past is meticulously created.

There are inevitably great comics produced any time an artist like Spain opens up his own past for the world to see, and Cruisin' With The Hound is packed with rock and rollin' great comics, and that's the best kinda great comics.
Posted by Bob Temuka at 4:27 PM