The faces of violence, with Dave Gibbons: The Secret Service 1-2

Back in the days when Alan Moore could still talk about Watchmen without choking on his own justified bile, he liked pointing out that Dave Gibbons was the only artist who could have done the story properly, just like Steve Bissette was the only one to do Swamp Thing justice.

His reasoning was that Gibbons’ background in architecture gave him the perfect foundation for such a structured and mannered work, Gibbons’ love of the perfect straight line defining the comic just as much as Doctor Manhattan’s view of time.

And this is how Gibbons is largely remembered these days – as a superb draftsman who can craft a comic almost to perfection. His work is always professional and always polished.

But he is much more than just a straight man to other writers’ whimsies – he’s also an awesome action artist that can deliver complex emotions with the minimum of detail, and he gets to do plenty of both in a new Mark Millar comic.

Of all the latest batch of Millar’s creator-owned work – which includes a new Kick-Ass comic and the fairly uninteresting Super Crooks - The Secret Service is the tastiest, thanks largely to Gibbons (although there is a Quitely comic coming).

Gibbons has the open and clear cartooning line that Wally Wood and Harvey Kurtzman and a lot of the early Mad artists loved, and it’s as amusing as it ever was, because it’s so damn serious. Gibbons is a master of the deadpan, and his characters often maintain an absolutely straight face, even when things can get totally absurd.

But he can also dial it all back, and make some fascinating comics out of a conversation between two people in a pub. A lot of Millar’s script for the first two issues of Secret Service - which also somehow feels like a slick, polished and popcorn version of the first issue of The Invisibles - is set-up, with page after page of a boy called Gary hanging out with his dodgy mates and dodgier family.

It could be tedious, but Gibbons is so comfortable with such a large – and ugly – cast of characters, and each is so effortlessly distinctive. You can easily tell the difference between a wide range off characters, while still seeing similarities between family members in their noses.

It’s wonderful character cartooning, and there are few professional comic artists who can express such joy or hope or despair through the curve of an eyebrow, and make it look so natural. 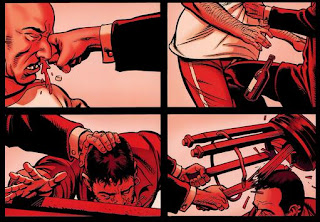 The first two issues do have a lot of set-up, but they also have plenty of violence

While Gibbons does get his chance to show complex emotions with a single crucial facial line, he also gets to draw a bride slashing open her new husband’s throat, and a couple of heads popping off, and a jet-pack, and several explosions.

One of the most reliable things about Mark Millar comics is that he will give good action artists good action to draw, and he frequently gets the best action out of terrific artists like John Romita Jr and Bryan Hitch. The writer’s underappreciated pacing skills giving his artists room to breathe and do so really crazy shit.

Gibbons has this ability to capture snapshots of time – there aren’t a lot of invisible speed lines, but he gets momentum into his strip by having things flying all over the place. The pre-credits action scene in issue one is full of missiles shooting through the air, blood splattering all over the furnishings and bullets kicking up in snow.

It’s exhilarating action cartooning, and there are four more issues of VIOLENCE (issue three’s cover has somebody getting bashed with a glass bottle) and slightly inappropriate thrills (the villain’s lead henchman is an amputee with those bendy leg things) to come.

The artist is still a magnificent draftsmen, and those skills are all over The Secret Service. Nobody does an establishing shot with such economy, and it’s still funny how these basic skills are lacking in some many other modern artists.

But even though he has been playing this game for decades now, Gibbons is still having fun, with his characters permanently stuck with serious stares, or having a laugh with some high-tech toys. It's what Dave Gibbons does best, and he is still doing it so well.
Posted by Bob Temuka at 10:12 PM