David Lapham’s Stray Bullets is a brutal, lyrical and efficient crime comic, but it's also one giant, 50+ issue flashback. The opening issue, published and set in the 1990s, saw two hitmen have a spectacularly bad night, and ended with one of them walking away from a car packed tight with corpses, as if it was no big thing.

The following issues of the ongoing comic story have been set nearly 20 years earlier, and show how this criminal world – where such awful carnage can happen – was built up.

And now Lapham is back doing new Stray Bullets comics every month, and they’re just as sharp and harsh and beautiful as ever. They fill in more of this world with fascinating detail, as crime wars, blood vendettas and all kinds of insane shit goes down in the 1980s. 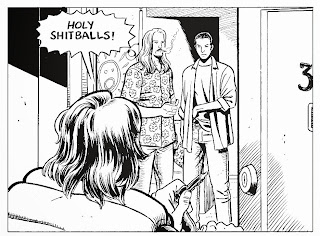 The good fortune of Lapham’s return to Stray Bullets cannot be over-stated, because it really looked like he had burnt out on the world of Virginia, Beth, Monster, Spanish Scott and the inevitable Amy Racecar.  After a flurry of activity in the nineties, the delays between issues got longer and longer, and the final issue of a multi-part storyline simply failed to appear as promised in 2005.

Lapham needed to get away from Stray Bullets, because he had a family to raise, and there was better money to be made working in corporate comics, and nobody can blame him for that. But the enthusiasm of his return to that world is still striking – finally finishing off that last issue and putting it out at the same time as a whole new series, along with a huge collected edition of the entire original series.

After sweating his guts out over the first few issues, Lapham has gone on to produce a dozen new issues of Stray Bullets over the past year, and the creator is going hard out to prove he hasn't lost the fire, with some spectacular results. 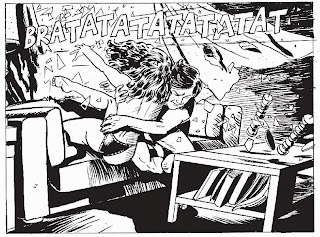 The first arc of the revitalised series featured the continuing saga of of Virginia Applejack, and her ongoing suburban horror survival story. After running away so many times, and falling into worlds of death and abuse, she's trying to settle down somewhere.

She's really making a go of it. It's not really her fault she has to keep killing motherfuckers who mess with her.

Stray Bullets is an ensemble comic, with a crazy cast of memorable characters, but it's also Virginia's story. She's smart and funny and proud, and is constantly dancing on the edge of destruction without ever quite falling over. She doesn't take any crap from anybody, even if she knows where that attitude will take her.

She writes her Amy Racecar stories to make sense of her world – putting her frustrations and fears and horrors into fiction and firing them out into the world - but her own story is mad enough. 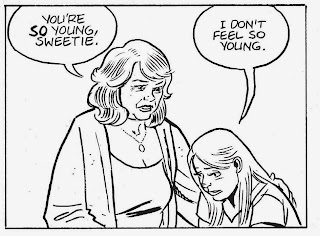 The second set of new Stray Bullets comics go even further back, explaining what was really going on in stories published nearly two decades ago. Lapham is playing the long game, slowly revealing information, over years and years.

Sunshine and Roses is full of moments of insanely tense drama, given extra wallop with the knowledge of where these characters are heading, and where they will end up. The differences between Beth and Virginia, a generation apart, begin to blur as the same old cycle of violence and retribution start all over again.

It a complicated and convoluted story – characters come and go, appear and disappear – and it’s also incredibly uncompromising in its complexity.

The basic plot is actually quite simple – it's just another decade-long war for a criminal empire – but it's told from the very edge of the story, from the perspective of beautiful fuck-ups and loveable drop-outs.  The unseen Harry lurks around the edge of the narrative, running the whole show with an unseen face, and even his main rival during Virginia's time - the cold Kretchmeyer – has only just been introduced as another young punk out to make a name for himself.

This ground-level view of the story is one of the real appeals of Stray Bullets. These people don't even get close to the Godfather's den, but can still feel his wrath when they cross him.

This doesn’t mean the story is grim, the characters are often total fuck ups who are the agents of their own misfortune – the most recent issue had some darkly funny bits involving a giant harpoon.  But it can be a brutal and unforgiving world – just ask Virginia Applejack. 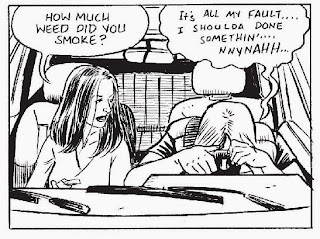 The other appeal of Stray Bullets is the same as it ever was – this is a stylish and slick looking comic. Lapham’s storytelling is always absolutely clear, even when the plot twists and turns in on itself, and his figurework has a wonderful flow to it.

Lapham is also does some tremendous character work, nailing just the right shy smile or steely gaze. None of his characters – apart from the mirror Beth/Virginia thing – look like any others, and that's not just helpful with a huge cast of characters, it's essential to sum up everything about a person with a few short, sharp panels.

And while his art does pop in colour, Stray Bullets takes place in a monochrome America, where colour and light would be out of place. It's just as stark and sharp as it needs to be. 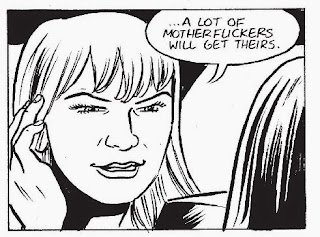 There is still a lot of time to fill until Stray Bullets gets back to the 1990s, but it’s heading to that car full of corpses - and the horrible feeling that the original body in a bag that the killers were hauling around is someone we know.

Hopefully, there are plenty more Stray Bullets to come, to fill in that long gap. Lapham's latest enthusiastic streak should be encouraged as much as possible because these comics are entertaining as hell, smart as fuck and stylish as shit.