The Last Box Of Marvel: No limits 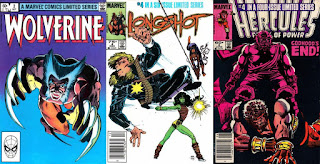 There was a weird amount of excitement when the big publishers started putting out limited series in the 1980s. It just wasn't how things were done - if something was successful, you squeezed as much out of it as you could, and if it kept making money, you just kept on going and going and going. You didn't actually let comic books stories have a proper beginning, middle and end like other mediums.

And terrific creators at the height of their powers relished the opportunity to tell those specific stories, unbound by the constraints of modern comics, and there was some quality work in the first wave of Marvel's limited series. After testing the waters with some Superman tie-ins, DC began smashing barriers with new, radical series that had nothing to do with their vast, never-ending tapestry, while Marvel used these off-shoots of the regular universe to take a slightly skewed look at that world.

Some of them are still great comics, decades later, and I'm glad to have a handful. Although I've been after the third issue of the Wolverine mini series since 1985 and still haven't got it. It was a lot easier to find all of the issues of the Longshot mini-series by the brilliant Ann Nocenti and Art Adams (even if that took a couple of years), but the two Hercules limited series by Bob Layton were easiest of all to find, and I've had a massive amount of affection for Layton's refreshingly loose space-spanning saga ever since.

All of these series have been followed up on over the years since, but those original comics still show why the concept took hold of the imagination for a while. Without the never-ending grind of regular monthly comics, a story could be told quickly and cleanly, and over and done with. Not everything had to be a 450-issues long. Sometimes four was enough.