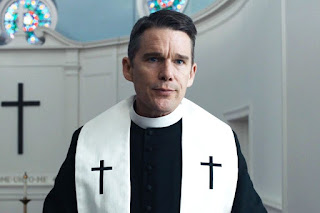 When choosing a film to watch, I often go for trash over art, and always feel shitty about it. Of course I knew First Reformed would be a far more rewarding experience, and was obviously going to be a smarter and deeper film, but I still watched the new Predator film first recently. Even though I'd already seen it once, and even though I knew it was total rubbish, it was predator over priest.

This is nothing new. In the days when I'd get a week's supply of movies from the video store, it was always the slick Hollywood bullshit or gross horror film that I would put in the VCR first, even though the absolute classic I'd watch last would always, always have more of an impact, and stick in the mind for far, far longer.

I thought I would have learned by now, but no, I'm still a shitty movie fan. When choosing films to watch this past week, I kept putting off First Reformed, and watching things like The Predator (which wasn't as bad as I recalled from seeing it at the cinema, except for those bits that were even worse than I remembered). What the fuck is wrong with me?

My only excuse is that I could half-arse The Predator, and watch it while reading a magazine or following the cricket scores, but First Reformed is a Schrader film, and demanded full attention and an unbroken viewing.

And holy shit, of course First Reformed is amazing, once I got to it. It's got all the certainties of a priest movie - the main character is going through a crisis of faith, and somebody wants to screw him - but goes off in gorgeously unexpected directions, especially once the barbed wire comes out. That's worth a hundred spine-rippings, and hopefully I'll remember this next time.

Perhaps what it means is you expect more from your genre entertainment. That's what I got from it. Discerning. They can't all be Blade Runner.