There was a glorious surge in interest in 'mature readers' comics in the late eighties in the UK, with the phenomenal mainstream success of comics like Watchmen and Maus sending publishers scrambling to fill new titles with political and socially aware comic strips (that also happened to be full of blood and tits).

There were terrifically anarchic efforts like Tank Girl, and the scattered work by the wider Deadline crew, and there were high-profile attempts to tap into this thirst for grown up comics. This included Crisis, the bi-weekly comic from the publishers and creators of 2000ad, which tried so hard to be one of the most edgy comics of its age, and never quite got there, although it was politically volatile and nakedly ambitious.

An ambitious failure is always far more interesting than a dull success, and Crisis had its share of both, but always tried to find the limits of grown-up comic books.

Remarkably, it actually found those limits, and even as Crisis took on some stories that were too hot for other publications, they discovered that the line was drawn at story about a thalidomide baby who grew up to be a little shit of a skinhead. 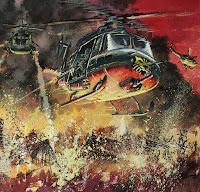 Of course, the Crisis comic was far from the first comic to take on political issues, while chasing an adult audience. Comic creators had been heading out into those uncharted waters for decades, with various explosions of underground and alternative comix.

But you didn't have to go to the local head shop for this fix,  Crisis showed up on regular newsstands, shelved near issues of the Beano, with some surprisingly hardcore content filtering its way into mainstream retailing.

And not just in the terms of sex and violence - the comic kicked off with some hardcore political screeds and subversive storytelling ideas. Writer John Smith brought his usual brilliant fractured narrative techniques to grown-up superheroes in the New Statesman, while Pat Mills' immaculately researched Third World War unashamedly took to its soapbox to deliver harsh polemics on the injustice of third world debt levels (while still having loads of action and peril).

Things got a little freer in the comic after the initial stories reached the end of their runs, and there were some safely charming stories, and a couple of genuinely thoughtful early efforts from Garth Ennis. It was all getting a bit safe, but Crisis was always looking out for something to rile up the squares, and it wasn't really that hard to find it. Actually publishing it was another story. 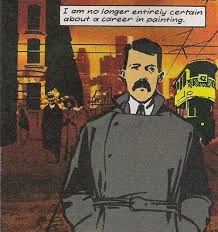 Once Crisis had been established, and was really looked like it was running out of puff, the comic got a powerful shot in the arm from The New Adventures of Hitler, the rip-tickling adventures of a young Adolf Hitler hanging out with family in England before WW1.

Proactively ideologically unsound, the strip was written by angry young Grant Morrison and drawn by his frequent - and welcome - collaborator Steve Yeowell. It had some of the most vomit-inducing colours in a modern comic book, and was far goofier and sillier than its title suggested. 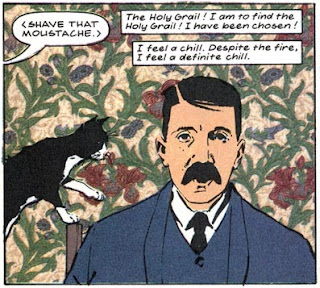 In fact, apart from the general concept of portraying Adolf fuckin' Hitler with anything remotely resembling sympathy, the comic was actually pretty safe, skating on a thin edge of easy surrealism - Morrisey is in Hitler's cupboard - and showing that Hitler was always a bit of a tool.

It certainly wasn't condoning Nazism, and happily took some cheap shots at the whole fascism things. The strip also took great delights in comparing Hitler's ideas to Thatcherism, which the UK was only just starting to shrug off at the time of the comic's publication.

It was a liberal-baiting title, but unthinking nationalism was the real target of this story. It's all literally farts from a flatulent bulldog, or shit in an overflowing toilet, disguised as the Holy Grail. 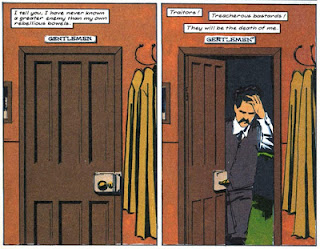 The New Adventures of Hitler was originally intended for another publication, but got turfed out of that magazine, purely on the politically dodgy nature of the whole idea, rather than the actual content. It didn't take long for Crisis to snap it up, and publish it. There was the usual reaction of mild outrage, but it wasn't really a huge deal.

Crisis needed to publish it, because it was in danger of losing that edgy image it had set out to conquer. Although it had run into some predictably religious strife with Ennis/Pleece's True Faith, the anthology comic had already blinked once, and nobody was going to take them seriously if they did it again. 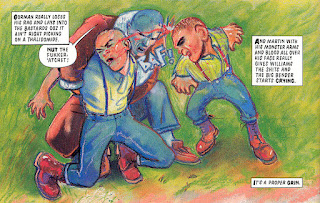 That blink was the unnerving and unflinching Skin, another in a devastating run of good comics from the team of peter Milligan and Brendan McCarthy, with their usual acerbic wit and ultra-trippy visuals.

The strip was advertised in the comic as a coming attraction, and was ready to go, but never showed, reportedly because the printers wanted nothing to do with it. After a short spell in limbo, it was eventually published by Tundra, and has been reprinted several times since. 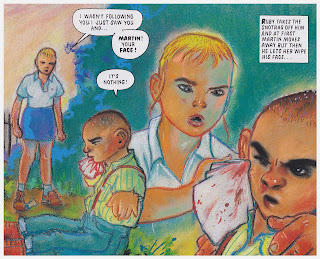 It wasn't actually that much of a surprise that it caused such a fuss before publication, because Skin is genuinely disturbing, but also brilliant in its humanity - victims of medical malpractice are still people, and can still be completely dickheads, if they wanna be.

Martin Hatchet is a little shit. A victim of the appalling thalidomide cluster-fuck, born with tiny arms, who doesn't give a shit about your sympathy. As one of his mates notes, the poor bugger can't even reach far enough to have a wank, so you can't blame him for having some anger issues.

But Martin has his mates, and finds a community among the other skinheads, and they just treat him as one of the lads. Their white power ideology is awful and moronic, but they still find a place for him. 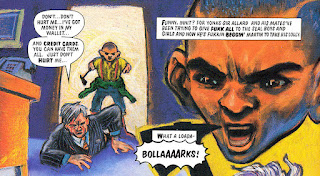 While Crisis kept trying to freak out its readers, it ran out of energy and was gone within a couple of years. It remains little more than a footnote in the history of British comics, but it still influenced a new generation of comic creators, willing to take up the cause of saying something outrageously offensive.

It's hard to imagine either of these two particular strips being published these days, where the most superficial reading of a story can overwhelm any measured reaction, and it's nearly impossible to imagine it showing up on the shelves of the local newsagent.

But for a while, there was a genuine effort to get this type of material into the minds of as many people as possible. Skin and the New Adventures of Hitler didn't spark another wave of craziness, but shit. At least they tried.
Posted by Bob Temuka at 6:30 PM