Love and Rockets: The easy cool of Jaime Hernandez


There's a new Love and Rockets, just a few months after the last one, and while the annual format saw a concentrated burst of brilliance in one fat package, it's always good to get a new taste of the Best Comic In The World.

The smaller format means there is a smaller chunk of story, and Love and Rockets Magazine #2 features bite-sized slices of both brothers' ongoing sagas, taking a few steps forward and underlying the slightness of the plotting with a couple of devastating emotional truths. So, same as it ever was, then. 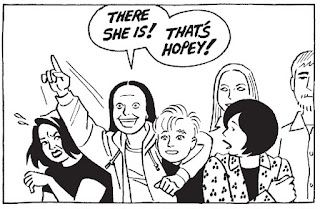 And another thing that hasn't changed is that Jaime's art is absolutely breath-taking. The stories might be short, but the body language, facial expressions and sheer craftwork on display are as huge as ever.

And the energy is still there, in stark black and white, no panel ever feels tired or knocked-off. Whether it's the sweaty thrills of rocking out in a dingy club - 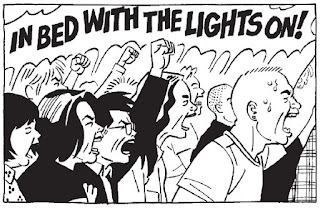 But his art is still just as powerful in the quiet moments, finding an ocean of conflicted feelings on Maggie's face when she didn't stick in somebody's mind as much as he stuck in hers - 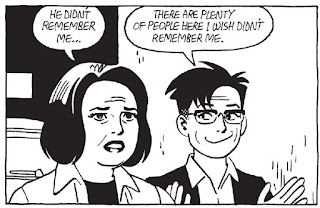 - or having the balls to show a slumped figure in proper dejection, with sexy stomach rolls and all - 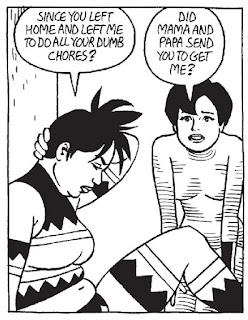 Sometimes it's just brilliantly clever, with Jaime giving a heavy dialogue scene some visual pizazz by having one of the characters clamber up a tree in immature frustration, and dangle over the other people - 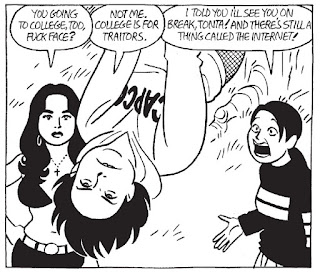 - and then reducing the powerful Vivian to a smaller, more unsure figure when contrasted to another character who has got her shit together (or is at least shows a better front of it) - 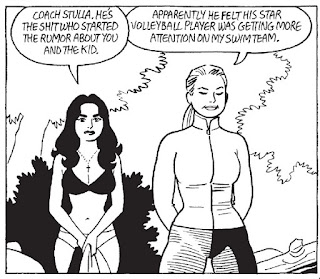 Don't worry, Viv gets her power back within a couple of pages, with the tree branch of one panel leading the eye in the next right up to a reveal of the character in all her naked glory. Back in charge, kicking ass and taking names - 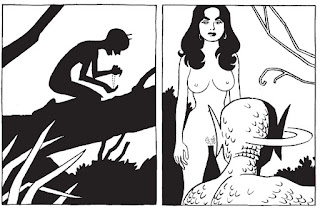 Jaime has been making this kind of craftwork look effortless for years now, and it's as beautiful as ever. Knowing that there is only a few short months until the next injection of Love and Rockets is a true joy. I look forward to the day.

Brother Gilbert's art reached a kind of brutal functionality a long, long time ago, and a lot of his art is people standing around talking, but every now and then, he catches the eye with a delicate expression, or by stranding a young girl in the middle of a vast room. Nice one, Beto.