I Hate Dolphins: Oh no he didn't. 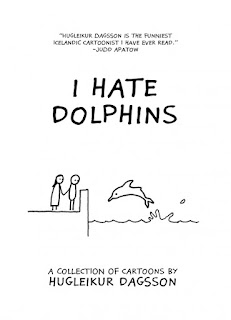 There's really only one joke in all of Icelandic cartoonist Hugleikur Dagsson's comics - with no regard for taste, morality or niceness, they're all going for the "I can't believe you said that" reaction.

This could get pretty tedious pretty quickly, and sometimes it does if you're reading page after page of pure nastiness. But Dagsson also really commits to the offensiveness - the go hard or go home philosophy - so you've got to give him credit for that. I'm just not leaving it lying around on the coffee table in case some poor schmuck stumbles across it. 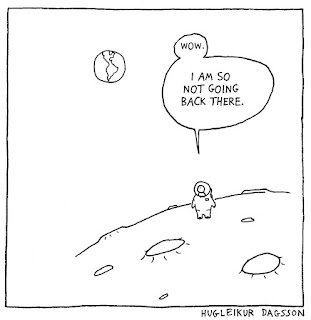 Dagsson's comics are collected in books with charming titles like 'I Hate Dolphins', ‘My Pussy Is Hungry’ and ‘Is This Supposed To Be Funny?’, and the artist makes no secret that he is out to shock and annoy. The back cover for I Hate Dolphins boasts a long and negative review, which says the artist is "utterrly without talent" and his work is ‘vile, crude and disgusting’. (The review is footnoted by a cartoon of a mother throwing up in her baby's pram.) 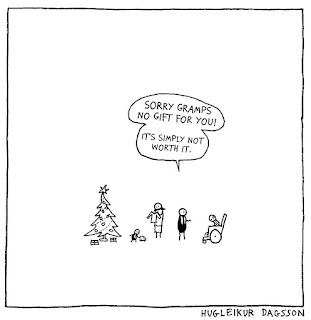 Because Dagsson has a go at everybody - children, parents, Santa, cute animals, people with rare genetic disorders, Lenny Kravitz, grieving relatives and the entire concept of love. He takes a giant dump on everything that is good and decent in the world, and doesn't even wipe afterwards.

On their own, out of context, these cartoons are just appalling, and impossible to defend without sounding like a total prick. But when read in a decent chunk, Dagsson's cartoons have a numbing effect, which means when he really goes out there, it's just silly. And as a dedicated statement to sneer at all the nice people, his books are almost admirable.

Crucially, Dagsson manages to do all this while avoiding the usual boring sneering 'anti-PC' snark. These kind of cartoons often reek of a political ideology, but there is none of that here. Dagsson really does hate everybody equally, and all faiths, cultures and creeds can go fuck themselves. 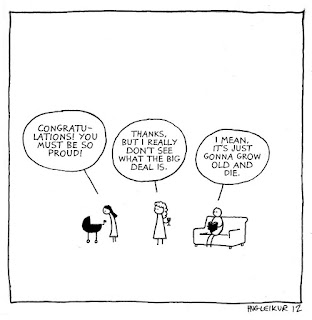 The art is sparse, to put it lightly - people are barely stick figures, and the cartoons hang in a large, blank and empty space. They're all tiny snapshots, with no continuity or progress, just someone doing or saying something really horrible at the exact funniest moment.

This blankness is another part of the appeal, and helps any reader dissassociate themselves from the very real pain and horror that Dagsson is making fun of. Watching the real life plight of children in places like Syria is unbearably tragic, a stick figure of another kid broken up into little pieces is just dopey. You can't take that seriously, no matter how noble your intentions are. 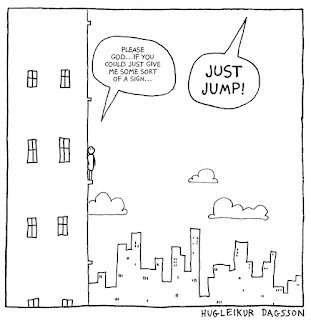 I always drink the local beer when I go travelling, and I always try to get a local comic, so I got the Dolphins book from the Nexus shop in Reijkavijk. It's not exactly representative of Icelandic humour - which is much dryer, and more polite - but it was close enough.

I've had it for more than a month, and still haven't read the whole thing, because when it becomes numbing, dozens and dozens of pages of nastiness gets a bit much. And I won't leave it out on the coffee table, because people might get the wrong idea about the type of person I am to laugh at this shit.

But I still like to sneak a peek every now and again. Because I still can't believe he said that.