I've been a news journalist for more than 10 years now, and whenever anybody asks me why I was attracted by the trade, I joke that I got into it meet girls. I love being a journalist, and I can even be quite good at it sometimes, because you get to do crazy shit and meet awesome people. But I'm really only half joking about the girls.

Journalism attracts lots of smart, literate and creative women, who are strong enough to stand up for themselves and pushy enough to get a good story. I would be lying if I said it wasn't a huge attraction of the business and, amazingly, it fucking worked, and I met my divine wife on the first day of journalism school, and we've been married nine years this week.

I've always been about the strong and smart women, ever since Karen Fox toasted me on a multiplication test at Highfield School when I was nine years old. And it certainly applied to the female characters I liked best in my comic books. They might not have been real, but I adored them all the same. 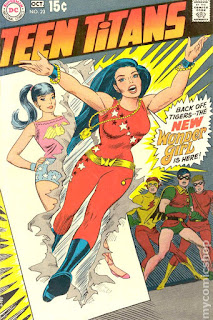 My first comic book crush was definitely Wonder Girl. Long before puberty ever came knocking, I thought Donna Troy was the bee's knees.

This was sparked largely by one of the early Best Of DC Digest from 1981, which was my first exposure to the Wolfman/Perez Teen Titans, with an all-new Infantino-drawn story bringing Aqualad back into the fold, and some groovy sixties adventures, drawn by Neal Adams, Nick Cardy and Gil Kane. I read that thing a million times as a kid, and thought Wonder Girl was the best.

I still don't really know why, but Wonder Girl was always my favourite Teen Titans. She rocked that red jumpsuit, was the physically strongest person on the team, and was the team's conscience and voice for compassion.

Comics were mainly all about the boys in the early eighties, and there weren't really a lot of great female characters. There was always Wonder Woman, but she was just a bit too chiselled and remote – Donna Troy was a cool young woman with a mean right hook and a caring smile, who loved to dance. 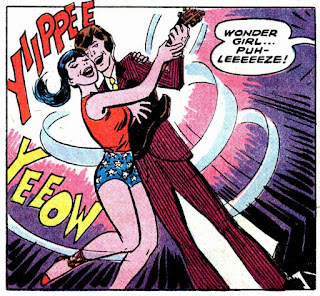 It didn't last, because adolescent crushes never do. Donna went off and married some wanker with curly hair and a beard, and she stopped wearing that awesome scarlet outfit, and – most importantly – her entire history got screwed around.

She was a continuity nightmare from the start – she only existed based on a fundamental misunderstanding of what the original wonder Girl stories were – and she got messed around so much, I honestly lost track of the character. I still love her look, and have a lot of affection for the character, but I honestly couldn't tell you if she even exists in the current DC universe. 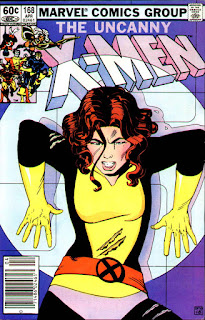 Donna was the first female character I really, really liked, but she wasn't the last, not by a long shot. By the time I got to my early teenage years, it was obvious that the coolest girl in all comics was definitely Kitty Pryde.

How could any 13-year-old ever be immune to her charms? She was the spunkiest character in the Uncanny X-Men, a comic that worshiped at the altar of spunky women. She was a serious nerd, but she always stood up o the bullies, even if she could be heartbreakingly nervous about it all.

Kitty wasn't afraid to call Professor X a jerk, and was always self aware of how bratty she could be. She could be insecure and shy and more than a little silly, but always strong.

By the time she joined Excalibur in the late eighties, she was nearly the perfect girl. She was tough, and resolute, and sometimes she was horribly out of her depth, but didn't let that stop her. Kitty was a part time ninja and full time geek, who could break your fingers with her eyebrow, but would rather beat your score on a video game. 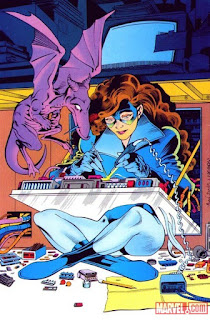 Unfortunately, comic book time does not progress as fast as real world time. While I turned 15 at the same time Kitty did, she is now half my age. I haven't wanted to be Kitty Pryde's boyfriend for years, because that would be creepy and weird.

I'd still like to hang out and play video games with her, though... 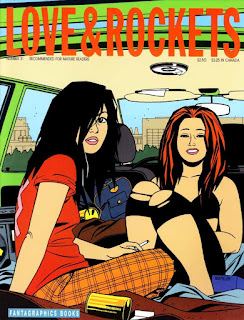 In the end, Kitty's adventures were just too crazy to identify with, and she was just a bit too awesome, and when it came to unabashed affection for comic book characters, things needed to be a bit more real. No wonder I fell so hard for Maggie in Jaime Hernadez's Love and Rockets comics.

Maggie Chascarillo is an achingly beautiful character, and while she started working on rocket mechanics and dodging military coups with awkward aplomb, she was also laden with real emotions and feelings.

Jaime's eternally fluid line certainly helped with Maggie's charms, but there was that strength, and those smarts again. Maggie wasn't the sort of girl who became a space ninja like Kitty, or a demi-goddess like Donna, but she was somebody you desperately wanted to keep in touch with, right throughout her life. 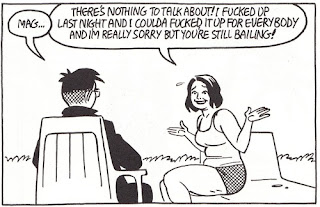 Even better, Maggie has aged in a way Wonder Girl or Shadowcat never could. Maggie is now in her forties in the latest round of Love and Rockets, and as beautiful as ever.

She still has that self-awareness about her lot in life, but is a lot tougher than she ever gives herself credit for. She's seen glimpses of the darkness of the world, and has walked with graveyard ghosts, but remains beautifully true to herself, through all the ups and downs.

Hopey was super cute, especially when she was causing trouble, but Maggie's life is an epic ballad of modern life. She's settled down with Ray now, which is the best possible outcome, but she is real enough to still garner plenty of affection. 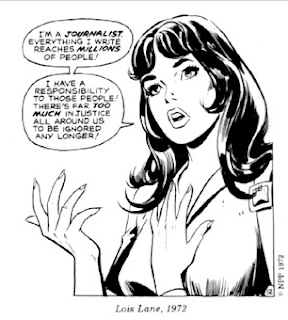 But still, even that is a youthful indulgence, because I fell in love with Maggie during the blinding summer of 1994, when I was 18-years-old, and things have moved on since then. I still love to see what she is doing, but it's like checking in on an old, dear friend.

Because when I met the lovely wife on the first day of our journalism course, all priorities changed, and when I told her I loved her a year later, I didn't need to be so emotionally invested in a comic book character. I had enough real joy to deal with.

A comic book crush is harmless enough, but it's even better when you can find such traits in the real world.
Posted by Bob Temuka at 6:34 PM