Too many dicks in the DCU

You can't blame people in the DC universe for getting a bit stressed out about life. They never know when one of their beloved superheroes is going to go apeshit and wipe out a whole city in some grotesque way, or when their whole world might get destroyed by some planet devourer, or when their entire timeline is rewritten so they never fucking existed in the first place.

These are some unique pressures, especially if you're not on the eternal merry-go-round of life and death that the iconic heroes go though. It can't be easy, living in a city like Gotham, where the Joker might just decide to poison the whole city's water supply because why not, or in Metropolis, where Lex Luthor could happily push you under a train if it slightly annoyed Superman.

But they still don't have to be such a dick about things. 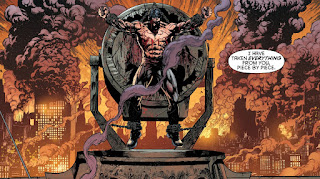 I'm certainly used to the mindless mob and stupidity of dumb prejudice of the civilian population of a superhero universe – that came from years of reading X-Men comics. But it's still fascinating to note that there are comics where the people in them are just such total dicks, it's hard to take them seriously.

And it's more than enough  to put me right off a story, when the levels of obnoxiousness get farcical. Because if they're so annoying, who can be arsed following their stories?

It certainly killed my interest in the Batman Eternal series, which I decided to give a crack when it showed up in the library, because I still like Batman comics, just not enough to buy them, and I don't mind reading new comics that are actually a year old.

It looked nice enough at first, but kicked off with an awesomely dumb and stupid sequence in the very first chapter.

The weekly series started with a horrific train crash that kills dozens of people, and in the immediate aftermath of it, a bunch of authority figures stand around yelling at each other about whose fault it is. While people are lying maimed and dying around them, they don't drop everything to help out in any way they can, they just stand there and act like gigantic douchebags.

Not only that, but they're leaping to instant conclusions about the cause of the terrible accident, which could apparently all be caused by a stray bullet hitting a power box on the wall, rather than waiting for the facts. I'm sure the people lying there in mangled wreckage a few metres away are only too chuffed to hear what the priorities are there. Look at them pose stoically as people bleed to death in the crushed wreckage behind them: 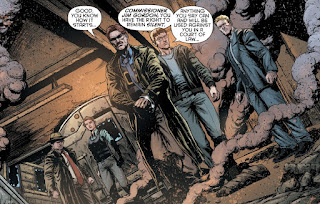 If you start a story with a tragic event, you have to convince your audience that these are real people who are suffering, or it's all hollow and false. If the first people on the scene of a terrible accident aren't instantly leaping to help, in any way they can, they're not real people. They're freaking monsters

Later on in the comic, the lead dickhead from that scene also personally sets free a psychopathic murderer, who instantly turns around and straight up kills a couple of people, which takes arseholeness to actual criminal levels.

I'm sure the series has its merits, but I didn't want to read any more after that, because if the comic doesn't care about the characters acting like the worst humans in the world, and just uses nameless victims that nobody cares about to propel its dubious tragedy, I'm not going to give a shit. I went off and read some Squirrel Girl comics, and had a grand old time. 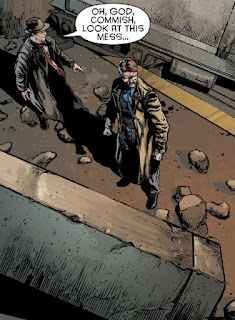 There is still a place for the humble douchebag in a superhero comics - I love both Guy Gardner and the mighty Lobo, but they're obvious joke characters, and if you're going to sell something as serious and important, you can't have everybody acting like laughable buffoons.

Especially when everybody is acting like an irredeemable arsehole. You need to have some decent people to contrast their awfulness, and you want the fatheads to pay the price of their idiocy. 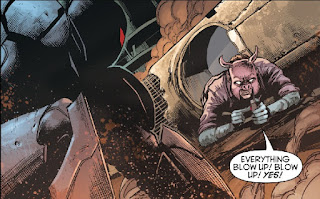 So many modern comic writers confuse surly and snarky arrogance for interesting character development. It's there is the superheroes, and it's there in the supporting cast. And it's been like this for a while for DC, in an era where Geoff Johns is the biggest influence.

One of the last Johns comics I ever read was a Flash comic from a couple of years ago, that saw Barry Allen start up work in a new police lab, with new workmates. And they were all such dicks to him, snide and rude and arrogant to somebody that had just met and want to work with.

I could see what the writer is going for, hoping to spark drama off these personality clashes, but it just ended up feeling forced and fake. Because no workplace is that sociopathic, or it will fall apart. You have to be nice to the people you work with every day, or things will get messy very quickly. One arsehole is enough to destroy a stable work environment, an office full of them is doomed.

It is arguable that this is all a side effect of the freelance life, that a comic creator forced to spend lots of time on their own in a small room, bashing away at their stories without the constant interaction with colleagues, bosses and minions, and that it seeps through into their stories, because an adversarial attitude towards building a career is how they think people work together. But this really might be reading too much into it. 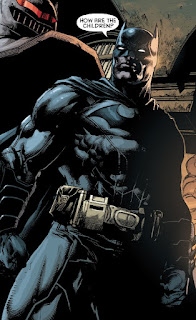 All I know is this - superhero comics that are full of scowling fuckwits are just not that interesting. Every character, no matter how small, has to bear some resemblance to an actual human being, or they really are nothing more than lines on the paper.

Batman Eternal was popular enough to spawn a currently-running weekly sequel, and did feature a surprisingly high level of quality in the artwork. There can even be some admiration at the labyrinthine plotting actually managing to hang together.

But when it falls down at the most basic level of characterisation, full of cyphers who spit nonsensical plot twists rather than actual conversation, then that's not something I'm ever really going to follow.
Posted by Bob Temuka at 5:01 PM

I recently went through a bit on a disaster myself (Butte fire in California) and 'just stand there and act like gigantic douchebags' was the entirety of the police response. Maybe the police are different in NZ, buy in America they are grossly unnecessary if not downright oppressive.