Looking at the face of comics

The biggest record store in my town has a fairly impressive rack of comic book trades and hardbacks, devoting half a dozen bookcases to the art of the four-colour funnies, and offering up a wide variety of comics for surprisingly reasonable prices.

I sometimes wonder what it all looks like to a non-comic reader. If you didn't know anything about them, what would it look like to you? What would stand out, and what would grab the attention? 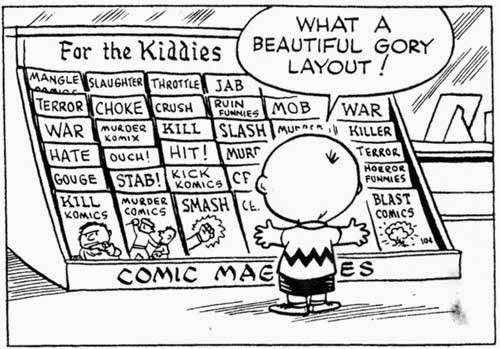 I've been deep in the world for comics since before I can read, so I'm always looking for specifics on the shelf – who published this, and who drew that. My interests in comics has become ridiculously refined over the years, and I always know exactly what I'm looking for.

But if all you had to go on was a collection of books, beaming their covers out into the world, what would look good?

It's all pretty subjective, but some publishers really do a better job of presenting their face to the world than others. Unfortunately, despite decades and decades of experience with creating great comic covers, DC is not currently one of them. 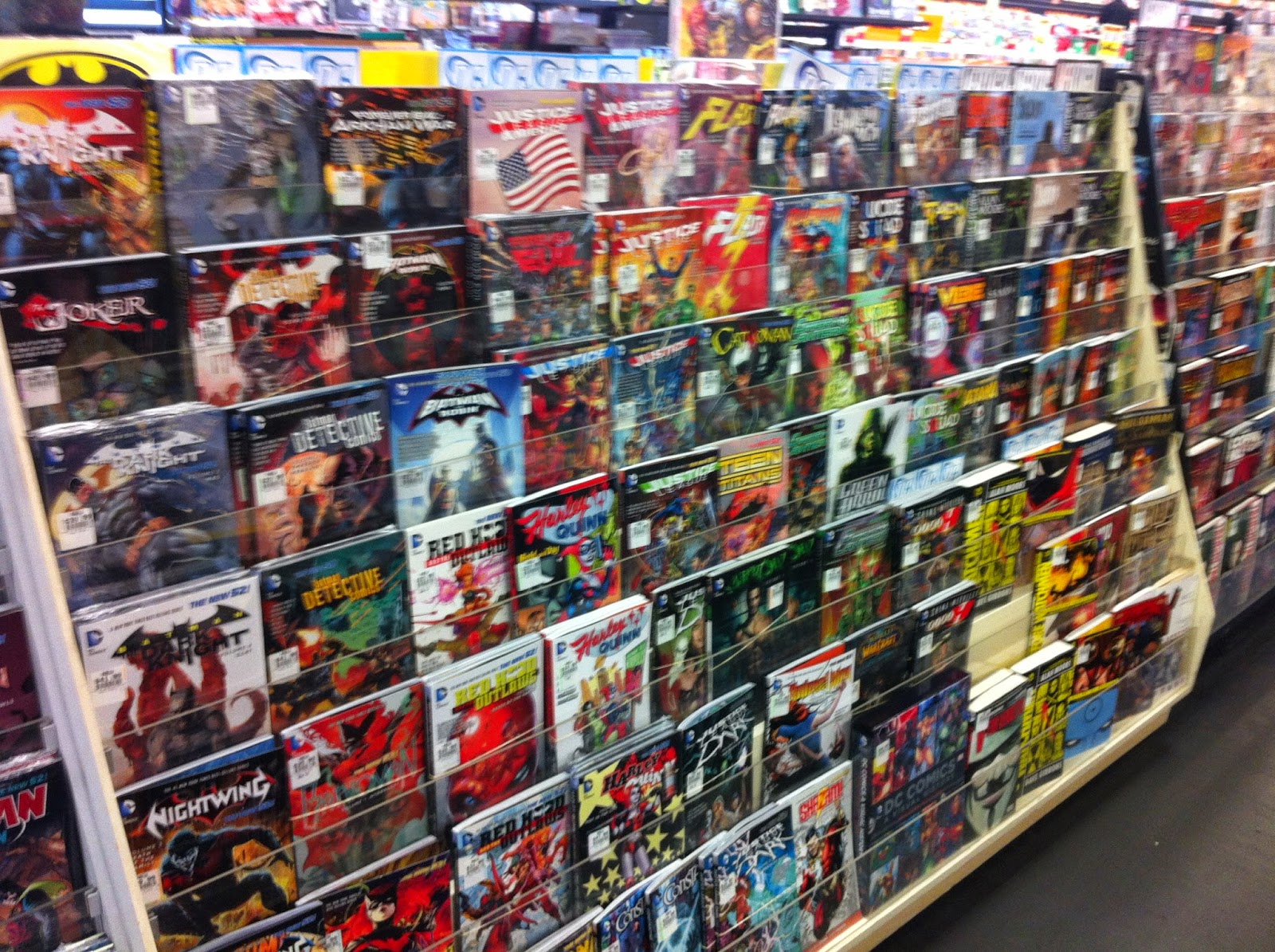 The bookshelf full of DC comics really can't be that appetising, with cluttered covers that are far too over-coloured and over-designed, and a sheer weight of dull product.

The glut of the New 52 has spread through into the collected editions, with dozens and dozens of awfully average comics racking up multiple editions. There is no cohesive look amongst the individual titles, and they're all yelling at you, drowning each other out in white noise. Even Batman – the most iconic of all superheroes, and the hardest to screw up – often has too much going on.

There is the odd nicely-designed collection from DC, especially when they start morphing into the Vertigo books, but they're drowning in this sea of ill-thought posing, dull melodrama and over-use of text. It's particularly painful because DC used to be all about the brilliantly catchy cover, with the company's bronze age highlights always found on its fantastically designed covers.

Superman and Batman and Green Arrow and the Flash might be some of the biggest characters DC has, and the movies and TV shows they spawn must surely have some people looking to the original source, but there is nothing pretty to see here. 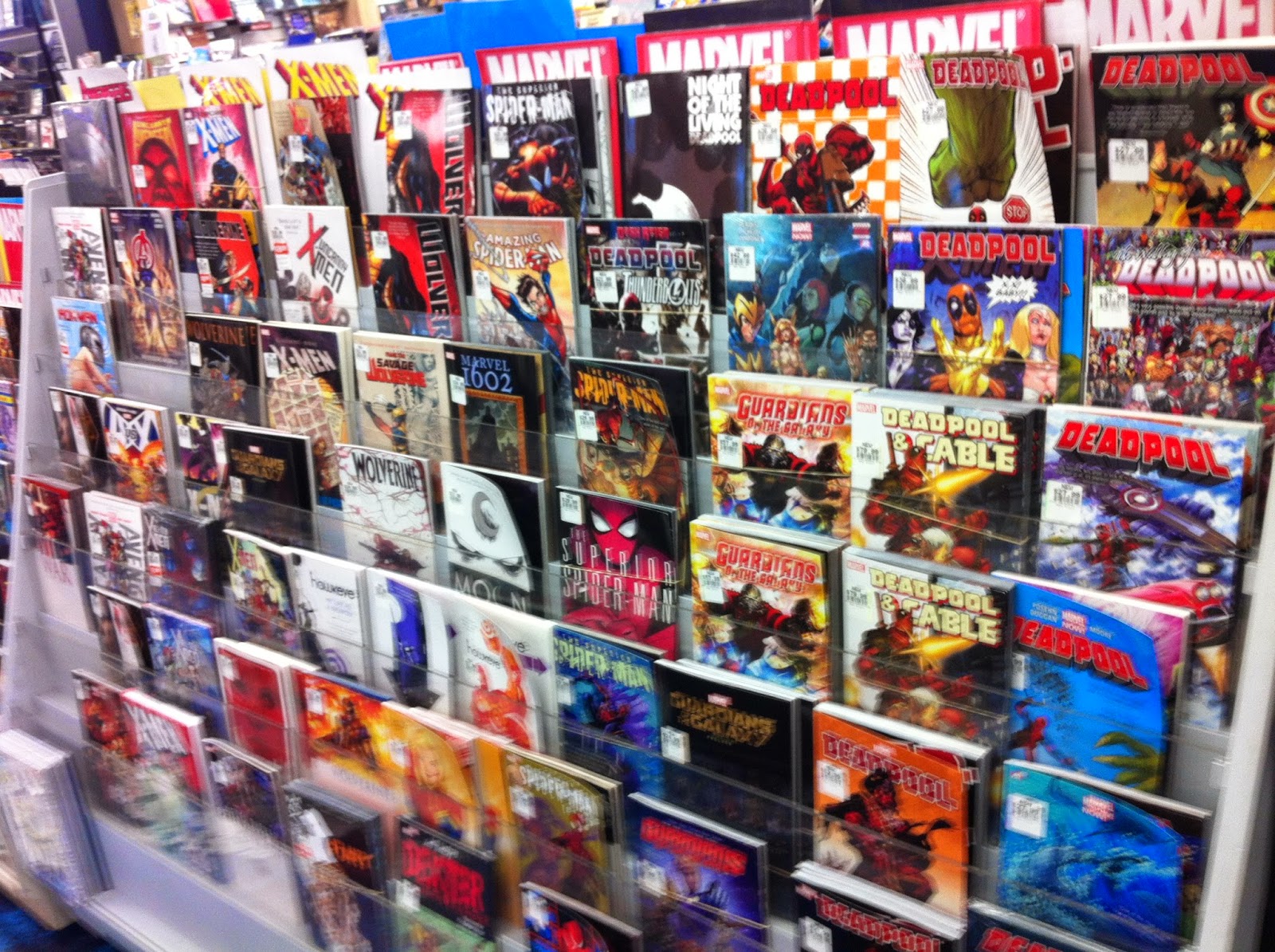 There is more of that unearned enthusiasm on Marvel's face, but also signs of hope. There is that same churning mass, with some of the unexpectedly popular Deadpool books offering little in the way of innovation or real style.

But there is also a pleasantly large amount of good design work, with some terrific use of white space and sparse, iconic artwork. The Moon Knight and Hawkeye books use this approach to look absolutely lovely, and the more a Marvel cover breaks everything down, the more eye-catching it becomes.

Even the Avengers and X-books, which invented most modern notions of superhero clutter, have some slick looking books on the stands, looking unexpectedly stylish and enticing. 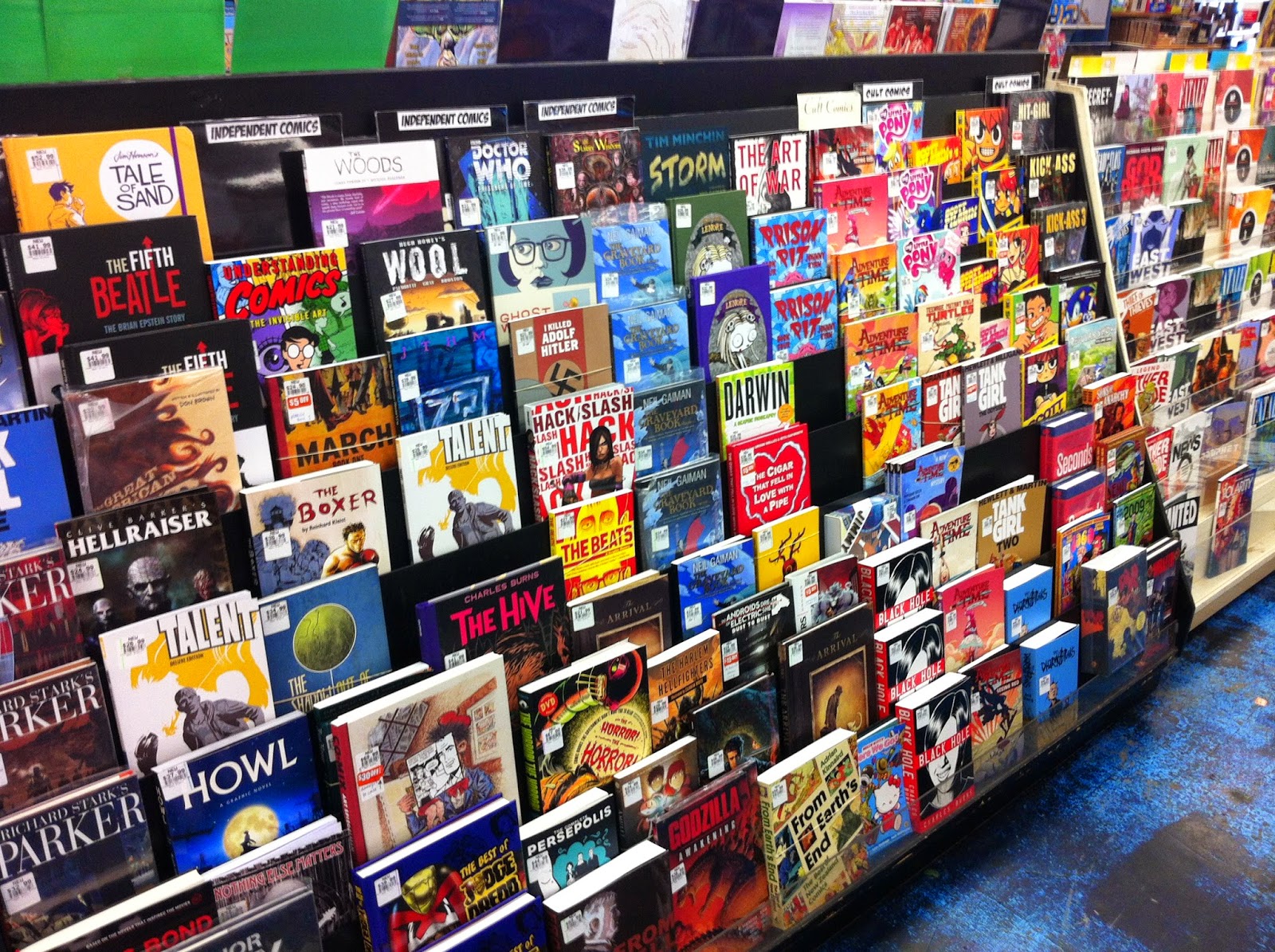 Next to the Marvel monolith are the smaller publishers, and this is where I think the real treasures are found, but again, I know what I am looking for. This is a total mash-up of all kinds of comics, and it can get disturbingly random – Adventure Time books are sandwiched between Prison Pit and Tank Girl, which is going to get somebody in trouble some day, but that randomness is part of the charm. It's always interesting to see what weird pile of independent comics you're going to get in a non-specialist comic store, you could end up with anything.

But that also means that section belongs to readers who are just not interested in superhero nonsense – My Little Pony for the enthusiastic kids, Darwyn Cooke's Parker for the more thoughtful grown-ups. And it's also a bright and colourful section, with fantastic covers on books by Charles Burns, Dan Clowes and Art Spieglemen aching for some browsing. 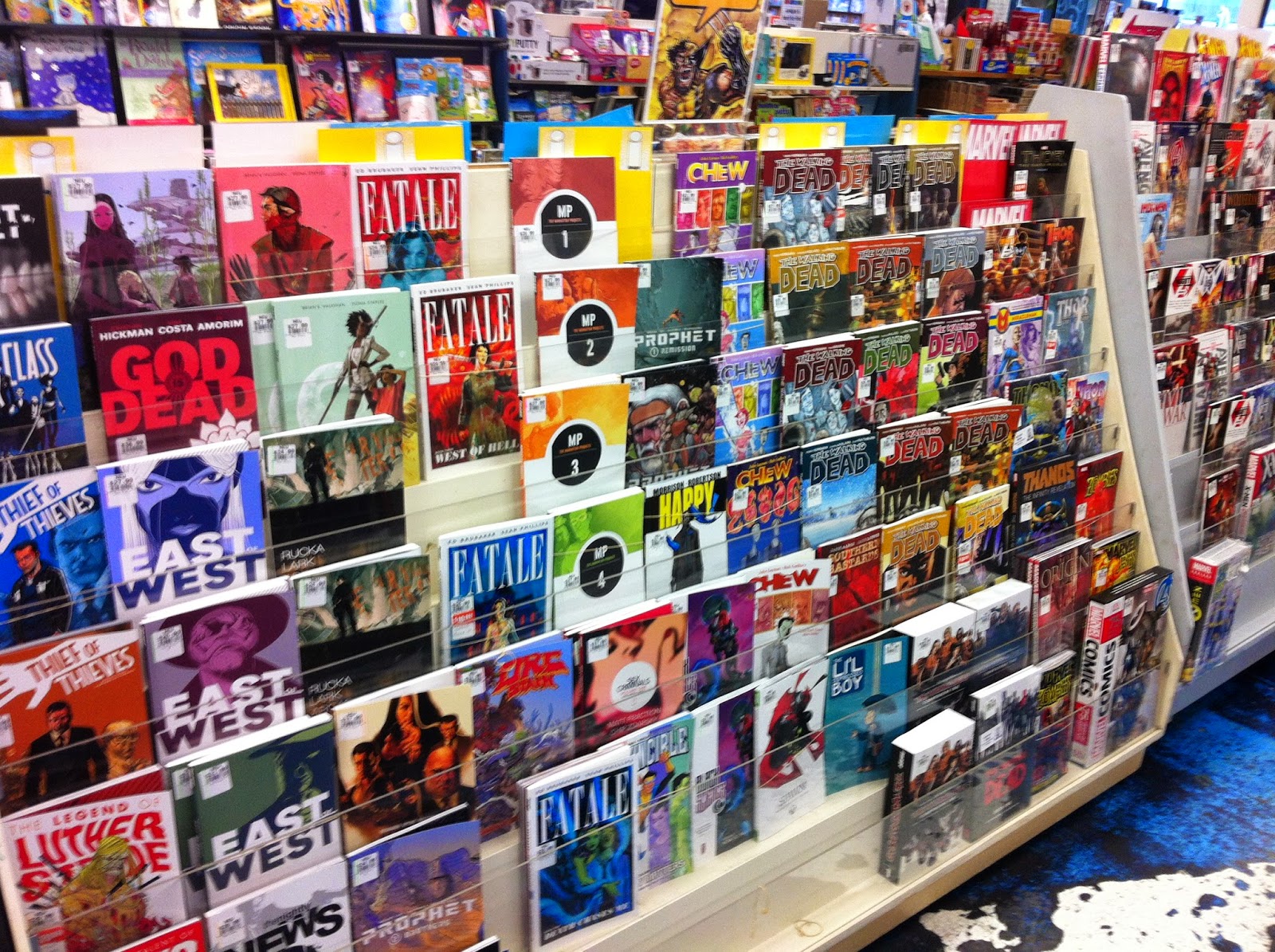 And somewhere in the vast gulf between Persepolis and Harley Quinn, there is the Image comics, and it has to be the most enticing section of all.

It's a section anchored down by The Walking Dead – hands-down the most successful gateway comic in the past decade – and offers more of stand-alone thrills of a single story.

I've had a mental catalogue devoted to the deep minutiae of the Marvel and DC universes since I was four, but I know that's abnormal, and most people don't give a shit about what ties into what, they just want to read a straight story. And Image has somehow become the company that serves up that kind of smart, stylish story, with something for everybody.

After all, I don't give a damn about Saga or East Of West, but they both have enthusiast fans, so they must be doing something right. And these are the shelves where I buy the latest Prophet book, or the odd Brubaker thing I miss.

There is some sparkling variety in there, at an excellent price – you can get most of the first trade paperbacks for the price of two new X-Men issues from the comic shop up the road.

It's not a huge selection, and the variety only goes so far, but look at all those lovely covers, bringing that shelf to life. There is excellent design work going into the presentation of these Image publications – sharp colours, simple layouts, eye-catching logos. 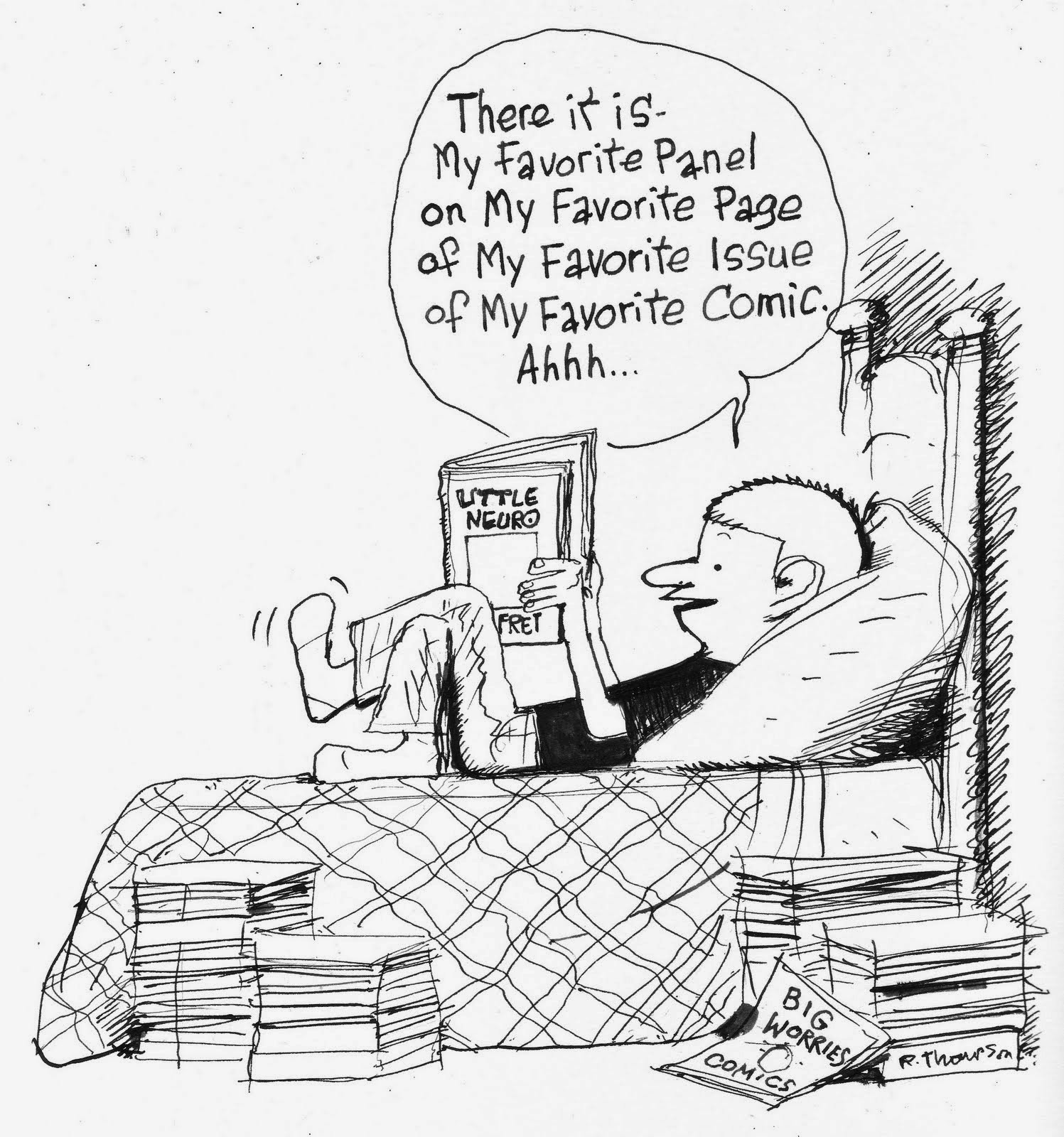 I still can't quite get into the mindset of somebody with no interest in comics, so I could still be completely wrong – maybe those monstrous New 52 covers really do grab the interest of somebody who watches The Flash TV show.

But I can't deny that I just think the Image stand looks so much better than the bigger publishers' sections, and so much more welcoming to the new reader. We all judge a book by its cover (even if we all hate to admit it), and Image has some fucking awesome covers.
Posted by Bob Temuka at 9:23 AM

OMG yes, those new 52 covers are terrible! they need complete phrases to describe the cover itself! FAIL!

Well, except for Justice League Dark. Those covers are cool