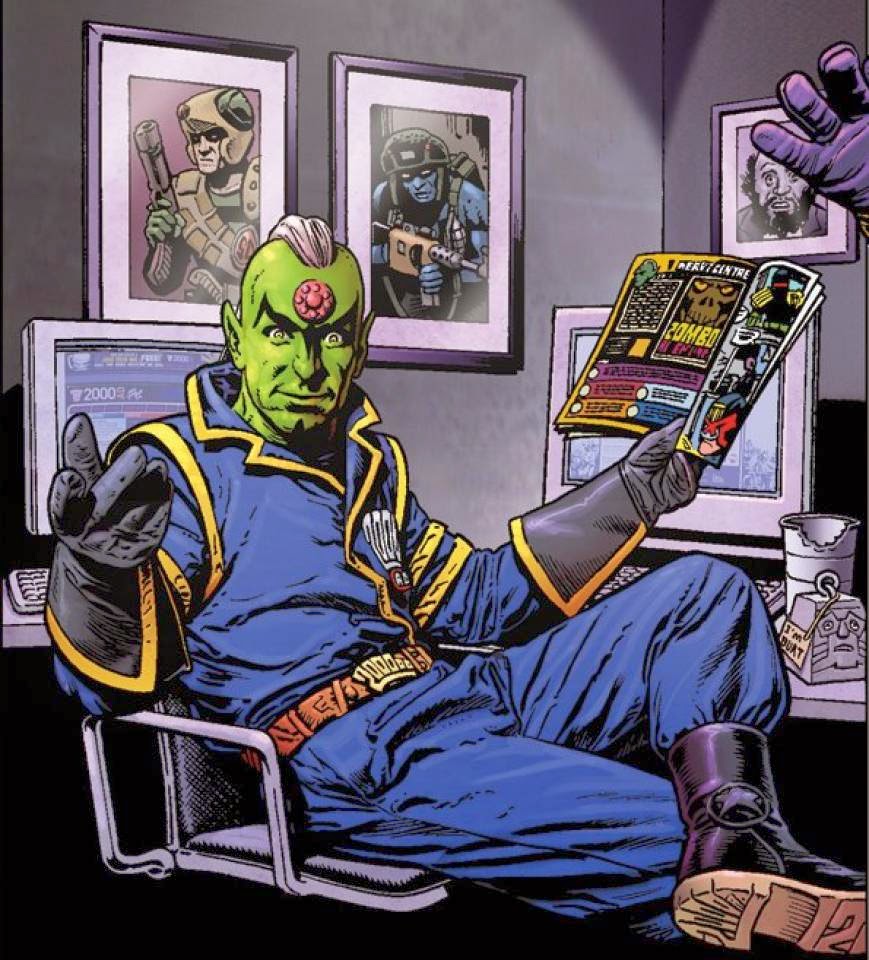 Tharg the Mighty, 2000ad's mostly-fictional editor, is always warning Earthlets about the dangers of too much thrillpower, when a comic gets so thrilling that the reader just can't stand it any more, and it's always funny and charming when he does it, partly because it's actually fairly true.

Because while I can usually handle the mild dose of thrillpower in my weekly prog, I can name three exact moments when I did really did overdose on it.

They all came when I hit three of the best storytelling twists I ever read, in issues of 2000ad that I was reading while walking along dull suburban streets, and I can remember exactly where I was on the street when each one hit.

I get a bit weird when it comes to things like this. I can imprint bad experiences on great comics, and I can remember exactly where I was when a great comic story takes a massively unexpected twist.

It's no surprise that these things keep happening while I'm out on the street – I still read most of a new issue of 2000ad while walking away from the store I bought it from. It's just the way I've always read the weekly comic. I get addicted to that thrillpower hit, and I need it, every week, as soon as I can get it, even if it takes more than two months to get here. (Hell, back in the day, it took six.)

And while I'm still floored by the occasional twist or turn in a modern issue of 2000ad, none of them have the impact that these three had. 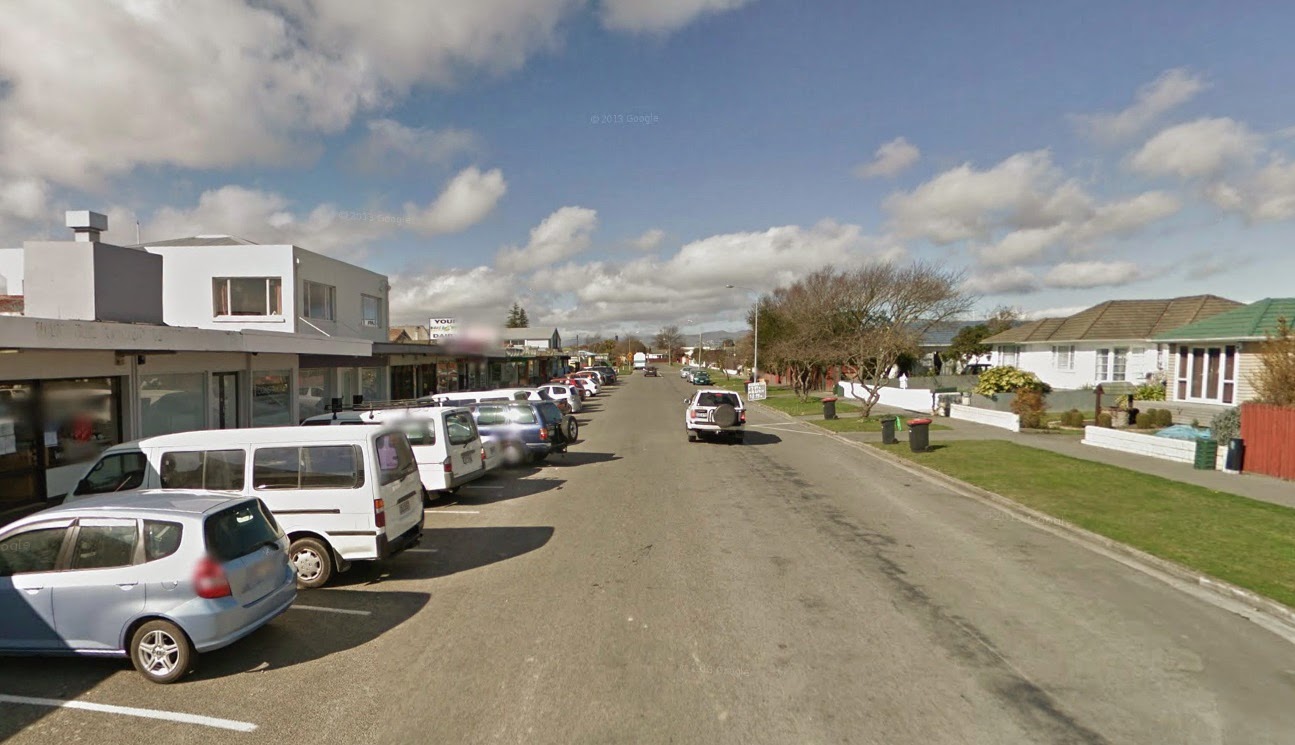 The first time it happened, it was The Dead Man. I'm 15, it's late summer in 1990, I'm in Christchurch staying with my Aunt and Uncle for the holidays, and I literally can't believe what I've just read.

The Dead Man had been running in 2000ad for a while, and was a straightforward mystery quest through an apocalyptic wasteland, that took a sharp turn into the spectacular when it was revealed that the Dead Man was, in fact, Judge Dredd.

I knew the series was set in Dredd's world – there were numerous references to the Cursed Earth – but I had absolutely no idea this was coming, and the next week until the next issue is one of the longest in my life. It doesn't help that the actual Dredd story in the same issue is a throwaway gag story about a bloke who turns into a fly, offering no clue to this new revelation. 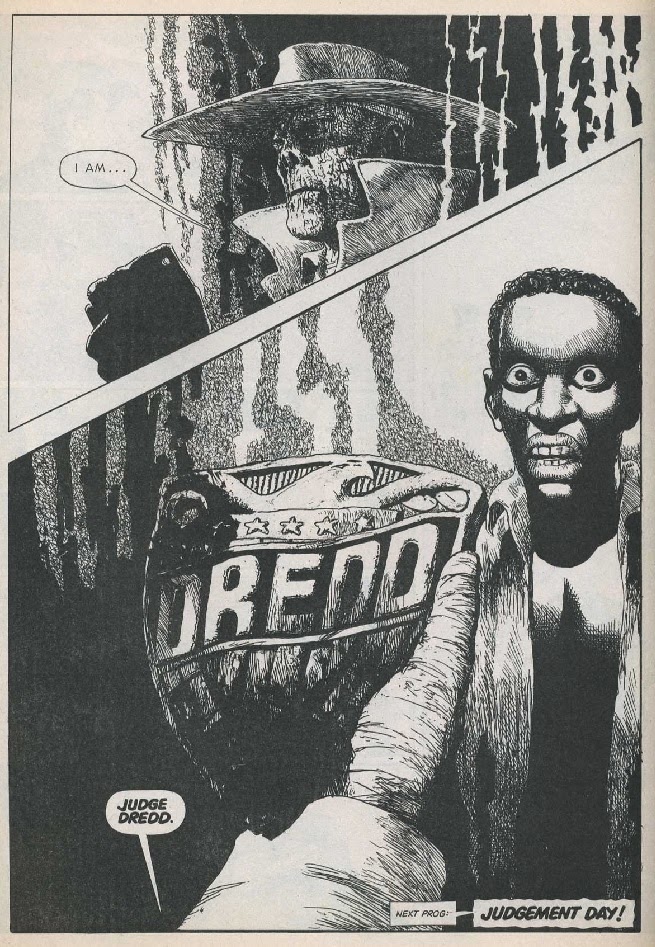 Of course, it was Dredd, and that reveal sparked months of intense Dredd action, but I'll always remember exactly where I was when it all really kicked off – outside a dusty bookshop in a dusty part of Christchurch.

It's the kind of twist that only could only happen in an anthology comic with a history of creating new characters, and a history of filler stories. Taking one of those apparent fillers and making it crucial is the ultimate 2000ad twist, and one it has pulled off several times since.

And it's effective each time it's wheeled out for things like Lobster Random or Sinister Dexter, but none of them come close to being as mindboggling amazing as that Dead Man turn. 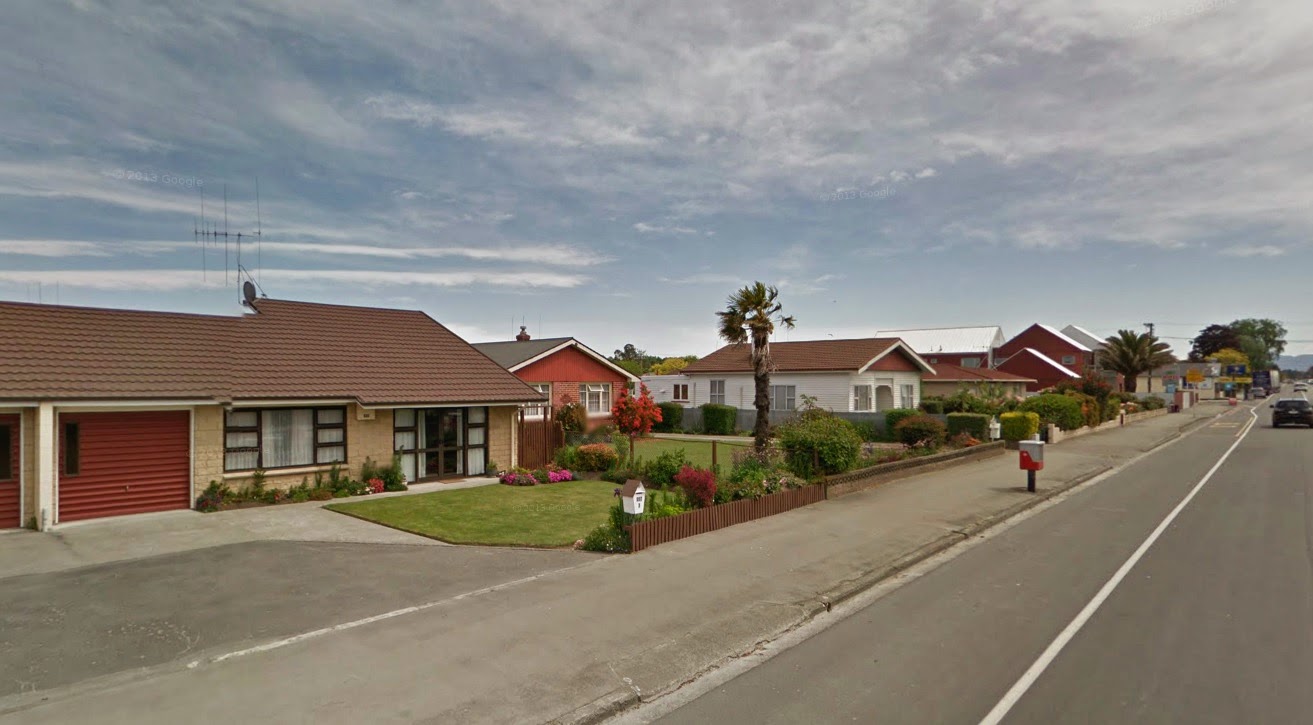 It's only a few weeks later when Judge Dredd blows my tiny little mind again. I'm back home in Temuka, walking down the main street on a sunny afternoon after school, reading about this crazy old woman that the Dead Man Dredd has run into on his trek back to the Big Meg and BLOODY HELL IT'S MCGRUDER.

This isn't quite as shocking as the Dead Man twist, but everyone knew that no judge ever returned from the Long Walk, and the revelation that the stern, proper McGruder has turned into a mad, hairy hag is a stunner, especially when her insanity doesn't stop her from being the natural leader she always was. 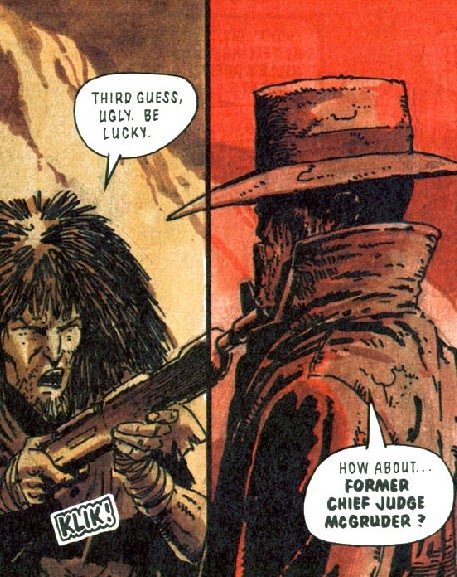 But it was also one of the first big signs that Judge Dredd wasn't just a story, it was a proper saga, with storytelling taking place over a period of decades. As more and more Dredd history is piled up, there are more and more references to past events, and that's become an essential part of the series, because there are ramifications and repercussions from Dredd's actions. You can't kill hundreds of millions of people without them.

McGruder's return came out of the blue, and stopped me dead on King St, but it also showed that characters grew and evolved outside the strict panels of the regular story. In later years, the sudden re-arrival of Vienna Dredd, almost three decades after her one appearance, triggered a new phase of the story – one of legacy, one of history.

McGruder ending up sticking around for a few more years, and while she got progressively crazier, she was given one of the best send-offs in comic history, where Dredd gives her the noble death she deserves. But Dredd – both the character and the strip – endures. TPO #3: Eternity in an hour on Otipua Rd

Now it's 1992, and 2000ad is going through a bit of a bright spot, with the silly overkill of Judgement Day in Dredd, and the one Robo-Hunter story by Mark Millar that wasn't a total waste of space, but Zenith is clearly the best thing in the comic, even if it's getting progressively more grim. It's Phase Four, and it's all colourful and clean, but every week it's getting worse and worse. There's death, Armageddon and universal apocalypse closing in on all sides.

We know the good guys lose, because Doctor Peyne is telling the story at the end of the world, talking about the rest of humanity – and the super-heroes who stood up to the Lloigor - in the past tense. But it's still shown in excruciating detail, as the sun turns black, and humanity is wiped out in the background. Zenith and Peter St John, the old hippy turned conservative, put up a brief fight, but they have no chance against multi-dimensional monstrosities and are utterly destroyed.

And then the universe belongs to these giant, mad gods, who annihilate space/time with their velocity, and prepare to break into all universes and all corners of existence, and then... 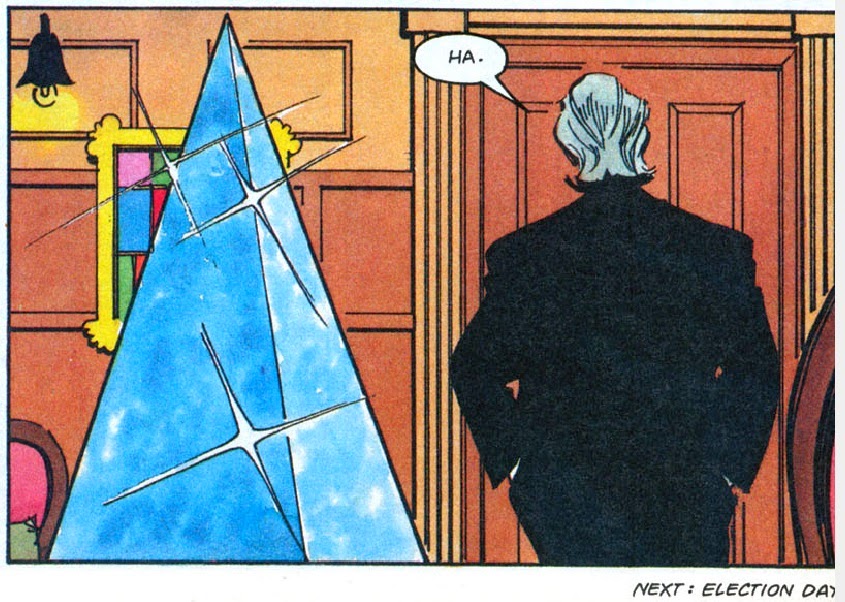 Yeah. Turns out, these mad gods were actually imprisoned in a sentient pocket universe that has been hanging around since the start of the series, and Peter St John totally played them for chumps. The world is saved, because it was never lost.

This is where I am when this hits: In Timaru, walking to buy a new TV aerial so that I can pick up the third season of Star Trek: The Next Generation with my first proper paycheck. Every week, I've been desperate for some hope, some light in the last Zenith story, but there has been none of that.  Everything is wrong, everything is dark, everything is lost. And then everything is okay again.

He did the same thing with Final Crisis, with the whole world turning to shit until Superman sings a song, although it's worth noting that the horrendous future glimpsed in his Batman run is still there when he finished, and the final issue of his long Batman stint was uncharacteristically melancholic, as the notion that Batman And Robin Will Never Die becomes more threat than promise.

But nothing has stopped me dead in my tracks like that Zenith twist. The Lloigor were out in their place, so I'm still there, in pristine space-time, standing still in thrillpower shock, on dull suburban streets.
Posted by Bob Temuka at 10:47 PM

McGruder's fate was all the more shocking, because until she took the Long Walk, she'd always been kinda hot. Strict schoolmarm hot, but that's understandable for a Judge.