Slaine versus the El Women 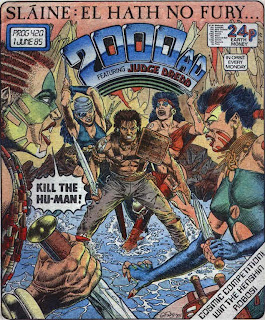 One of the appealing things about the great 2000ad characters is that they can be utter douchebags, but that never gets in the way of a good story. Make no mistake, I consider the best 2000ad strips to be among the best comics I've ever read in my life, but that doesn't mean I actually like the main characters in those stories.

Judge Dredd is a fascist bully-boy, who only bends after decades of intense pressure. Zenith is an arrogant sod. Nikolai Dante is a liar and a cheat. Rogue Trooper's bio-chipped buddies had more soul than he did. Nemesis The Warlock thinks we're all a bunch of insects. Johnny Alpha was the only truly good man, and even that has been chipped away at in the past few years.

But the worst of them has always been Slaine MacRoth. He's the biggest dick of them all. 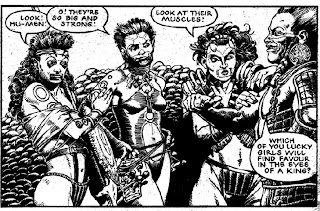 I'm only ten years old in late 1985 – so I still think girls are pretty icky - but even I can recognise the stunning beauty of Glenn Fabry's El Women when they show up on the cover of 2000ad Prog 420.

Fabry had recently stepped in as one of two regular artists on the Slaine strip, taking a foundation built on Belardinelli and McMahon, and taking the strip to new levels of popularity.  It's his first major mainstream work, and his style evolves noticeably over his first half dozen episodes. By #420, his art is the slickest in the world, with his pages containing strong texture, intense detail and flowing body language.

I really do think he's the best artist on the planet at that time, and then he gets to design the El Women, a bunch of lite-demonic females living in a weird landscape outside time, and their crazy hair styles, sharp smiles and pointy ears make the 10-year-old me feel a bit funny. Especially when Fabry gives them strange fantasy bondage outfits when they meet Slaine (although he is noticeably unimpressed because there is not enough meat on them).

And they're all getting along nicely for a while, and then Slaine kills them all. Because he's a dick. 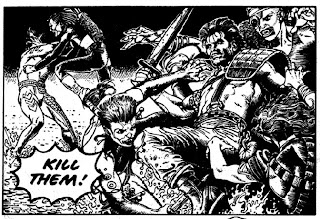 To be fair, they're not really women, they're entities of evil who turn into “weird, slug-like” creatures after death, but Slaine gleefully slaughters them all when he discovers they are vulnerable to his iron sword, and callously kills one of them who is begging for mercy. He comes across as a bully, and I don't like bullies.

I've liked a lot of Slaine comics since the day I first read that comic in 1985, but I never liked the actual character after that episode of the strip. He is a bullying, arrogant cock, and there would be plenty of other examples of his status as a total arsehole over the next 25 years. He's always beating up people (and dwarves) who are smaller than him, he's boasting of his prowess as the greatest warrior in the world (which, to be honest, he is), and at times he stands by as more women and children are slaughtered in brutal war campaigns.

Slaine has been running more or less consistently in 2000ad for the past few decades, and there was still some great work to come, including Fabry's own later work, the stunning arrival of painted Bisley and the incredibly attractive faux-fumetti of Clint Langley. And while I thrilled to these adventures, I still didn't really like Slaine any more, and I never would. 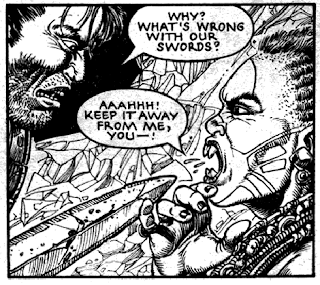 Pat Mills comics – especially his Slaine comics - can often come across as grossly offensive if read in a certain light, and the massacre scene in #420, and the sexually-charged lead-up to it, can certainly be seen as irredeemably sexist. But it's a morally clear choice that is Ditko-sharp, more of a simple good versus evil situation, with no grey. And Mills has consistently shown himself to be on the side of the downtrodden, the marginalised and the bullied for his entire writing career, with plenty of fine female characters in his bibliography.

Later, when Mills returned to the concept during the Langley period, he had the El Women more obviously represent another aspect of the Goddess Slaine worships, figures of death and rebirth who don't mind getting killed because it's part of a natural cycle. Slaine even shows some mercy this time.

It didn't really help, mainly because Slaine was so huge at this point in the story, and he still looks like a monster, battling against these girls.

Slaine is still going strong in 2000ad, and the strip has celebrated its 30th anniversary with a greatest hits story, as Slaine is sent bouncing back through his timeline and reliving past adventures, with the added bonus that many of the original artists have returned. There has already been a McMahon retread of the sublime Sky Chariots story, and Bisley is also coming back for some full-colour fun.

And then, right in the middle of this celebration, there they are again, Slaine taking on the same women, by the same artist. And even though it's slightly different – they're immune to his iron and Elfric shows up a lot earlier – it ends with the same results, as Slaine bashes them all with a magic flaming skull.

There is certainly a pleasant nostalgia in seeing Fabry back on Slaine, and it's a fascinating example of the artist's evolution over the years, re-doing a story from the period where he really was the greatest, with noticeable variations in line and texture.

But it's also a sharp reminder that I just don't like Slaine,and that he's still an arsehole who kills a bunch of people and then wants to hurt them even more, because he likes to "cherish his wrath".

For all his faults, Slaine is still an honourable and noble man, and one of the greatest kings who ever lived. And he is certainly a lot better than almost every other character who is part of his saga, for he lives in an age of cruelty and literal barbarianism, where everybody is unlikeable to some degree.

But while I have certainly changed a lot over the past 28 years, I still share my ten-year-old's distaste at the way he hungers for violence.

I'm certainly looking forward to the Bisley in the next issue, and I will enjoy reading more of his adventures - and there are more coming, with Simon Davis now taking on the art duties - but Slaine is still a fucking arsehole and it only took a retread of a massacre to remember the moment when I turned against him, and was never fully on his side again.
Posted by Bob Temuka at 10:50 PM