Surfing the skies with Kenny Who


Even though the entire comic medium is built on a foundation of characters beating the crap out of each other, there is still a painful lack of great action comics over the past few decades. It’s a lot harder to capture the momentum of a good action sequence than it looks.

A good piece of strong action art is about power and body language, and it has to move and flow, or it comes out all stilted and pained. Jack Kirby, as ever, showed the way, and there are plenty of terrific action artists working in modern comics, including the fluidity of Paul Pope and the sharpness of Frank Quitely.

But for a masterclass in how to do a stunning piece of action comics, go see a five-part Judge Dredd story that ran in 2000ad 1986: Midnight Surfer. 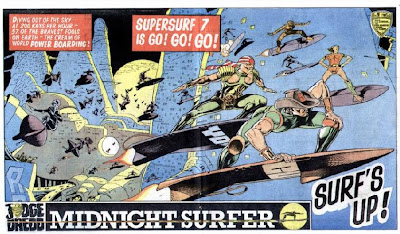 Marlon Shakespare – aka Chopper – first appeared in a Dredd story called ‘Unamerican Grafitti’ in 1981, which featured the young punk trying to stand out from the crowd by literally scrawling his name on the greatest city in the world.

It’s a cracking story, showing that there will always be some people who will do anything to feel alive in a city of 800 million, even if it’s insanely dangerous. It was one of the first Judge Dredd stories to show just how horrible it could be to be one of the crowd, packed together in skyscrapers, but also that the human spirit could soar and even, in the story’s ultimate twist, inspire something mechanical to live.

It was a terrific introduction to Chopper, who even got the last laugh in the story, with his smiley-face icon (years before Watchmen) appearing on the symbol of a fascist law system in the dawn light. And it became one of the first real classic stories in the Judge Dredd canon, with the title character’s bullying nature highlighted in an interesting new way that would yield rich results over the years.

It was surprising to see a boy’s-own comic like Judge Dredd tackle these issues, and even a little subversive for its time in its distrust of authority. But it was even more surprising when Chopper returned to take another shot at the man in Midnight Surfer, and that this sequel would end up being one of the strongest examples of great action comics I would ever read. 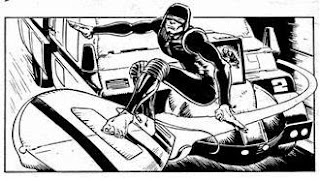 Four years after Unamerican Graffiti, Midnight Surfer – which ran in 2000ad progs 424-429 – was less than 50 pages long, but is damn near a perfect comic – economical, moving and exciting.

It featured Chopper literally taking to the sky to surf the air on his hoverboard, and his quest to prove himself the best in the world. By the end of the story, the whole world would know his name, and know that he was the greatest skysurfer on the planet, and that was worth risking his life and freedom.

And if Dredd was a bully in the first Chopper story, he was the outright villain in Midnight Surfer, a symbol of a crushing society that shoots to kill for the perp’s own good.

It’s a prime slice of classic-era 2000ad, with the usual witty and pointed script by John Wagner, but it’s the extraordinary art of Cam Kennedy which brings real power and grace to this story, finding sublime beauty in a tale of crazy people blasting through the sky on flying surfboards. 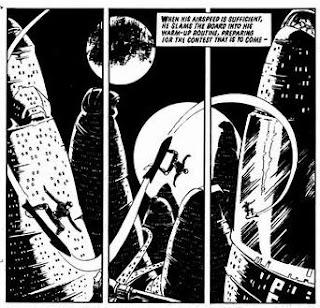 Kennedy is one of the most under-appreciated action comics artists of the last few decades, at least outside the UK. He never really broke into the States, even though he dabbled in Batman, Punisher and Lobo comics, and was the artist on one of the few Star Wars comics that actually had some weight to it. (Although his apathy towards US comics is clear in the first Kenny Who? story in Judge Dredd, which is a wickedly pointed piss-take of American comic industry practices, about a year after Midnight Surfer.)

He hasn’t done any art for American comics since 2003, although there has been less Kennedy art in general over the past few years (apart from a lovely adaption of Robert Louis Stevenson’s Kidnapped with Alan Grant).

It’s a real shame that Kennedy seems less interested in comic art these days, because his work is always spectacular. He has a distinctive chunky style that can take some time to get used to, but it’s well worth the effort.

Kennedy honed his skills in the brutal world of UK boys adventure comics in the eighties, bringing a fuzzy dynamism to Rogue Trooper, Fighting Mann and the VCs, before nailing down that jagged and lose line that would define his work for the next few decades.

Midnight Surfer gave Kennedy the chance to give his style its greatest platform, giving his art the room to breathe in the typically claustrophobic setting of Mega-City One. The story of competitive sport of sky-surfing could have been an extremely silly one, and while Midnight Surfer certainly features its fair share of absurdity, the story has a lot more emotional depth and sheer action to make it soar. 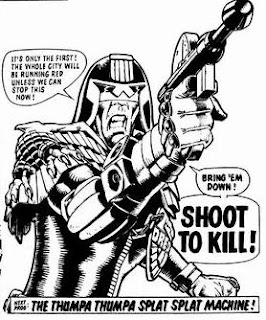 Kennedy’s work speaks for itself. While his stylistic flourishes frequently result in grotesque-looking characters, he has a grasp of body language that always grounds his art in the real world, but also gives the figures in the panel real weight.

Look at the way Chopper leans into his punch that sets off the fire alarm, only to gracefully glide between two sliding doors: 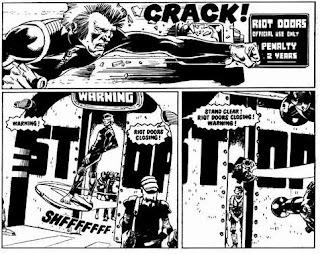 Or check out this page! The way an incredible death-defying feat is portrayed with some simple long panels, lying on top of each other, broken by grim determination, giving the reader all the information he or she needs to grasp the gravity and danger of his feat. (I also love the 'Blast!'): 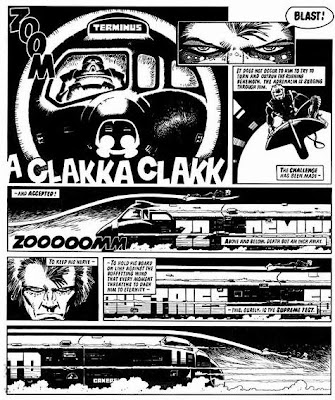 Or Chopper’s elation at completing that impossible task, brilliantly brought down to earth when the only witness is a clueless citizen and an apathetic robot.

And all of that is just from one five page sequence in the story – there are dozens of other pages of art that are just as fluid, and flowing, and exciting. The climactic race through the city is real pulse-pounding stuff, and surprisingly harsh – one minor character wipes out and apparently ends up impaled through his arse – but when Chopper emerges from the tunnel, carrying the reigning champion to safety, it’s utterly triumphant.

Tharg knew a good thing when he saw it – it’s notable that of the six issues of 2000ad that ran the original Mindnight Surfer, three of them featured Kennedy’s Chopper on the cover. The character came back for Oz – and the ending of that race still breaks my fuckin’ heart – and then the equally marvellous Song of the Surfer. That was the peak for the character, and even though there were some nice little stories, including a beautiful Marty Edmond-illustrated tale from Garth Ennis and an oddly stilted story by Wagner and Dylan Teague (that still gave old Jug a decent send-off,) Chopper had really finished his race.

Kennedy didn’t do any more of the Chopper stories, although there was some more sky-surfing beauty in a Gordon Rennie-written story from 2006. It had the same grace as Midnight Surfer, but lacked the heart of the original story and ended up being pretty bloody bleak. 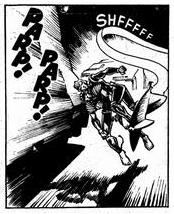 I was 12-years-old when Midnight Surfer came out, so you know it blew my socks off. I read it again for the first time in ages the other week, and even though the paper is starting to get brittle, there is still energy and passion in those pages, twenty-six years after they were published.

I still let out a little cheer as Chopper achieves the impossible, and the city rises and cries out his name. Following Chopper's triumph is a hell of a ride, and remains eternally exciting.
Posted by Bob Temuka at 3:52 PM

Nice write-up. Makes me wanna track down the story and read it again (lost all my old 2000ADs a long time ago).

Other good action comics: 100 Bullets, pretty much anything by Frank Miller and - hmmmm - Geof Darrow?

I'm SO glad to see this post, Bob... Cam Kennedy's long been one of my favourite artists, particularly for his 2000AD work (also notable: The Outcasts and the classic Light and Darkness War) and I've basically loved everything he's ever worked on. He's also a complete gent and I've been lucky enough to pick up a few pieces of original art from him in the last couple of years - Midnight Surfer is the obvious gap, unfortunately (http://www.comicartfans.com/GalleryRoom.asp?GSub=99158). (However, I do have a cracking page from UnAmerican Graffiti: http://www.comicartfans.com/GalleryPiece.asp?Piece=806079&GSub=116495). Midnight Surfer will always be one of the really special Dredd stories, and Cam worked on more than his fair share in an all-too-brief period; in classics like Magnificent Obsession, The Warlord and The Big Sleep he made the story flow and it looked all too easy - he was also a perfect match for the touches of humour employed by Wagner & Grant. (The Kenny Who? character evolved from a trip to DCs offices in the US, where, after giving his name at the reception, received the response 'Kenny Who?' The perils of being a Scot abroad...) Unfortunately, these days Cam's eyesight is not what it was and he's not in a position to return to comics, but he's left us an amazing back catalogue (most of which is still in print, unlike the work of, say, Milligan & McCarthy). Anyway, great post!