For all its macho posturing, cheerful offensiveness and outright tastelessness, Kick Ass can actually be a surprisingly sweet little comic sometimes.

Kick Ass 2 finally reached a conclusion recently, taking a year and a half to get through seven issues, and climaxing with a double-sized issue of murder, mayhem and an unashamed appreciation of super heroes.

The superhero genre has become a weird and mutated thing over the decades, and now the medium is choked with superheroes who kill, or are just plain old jerks. Nobody likes people who are better than them, so they’ve been dragged down to our level, and those capes don’t really work in the gutter.

There are still lots of great superhero comics – creators like Waid and Morrison idealise superheroes back up onto the pedestal where they belong – but it’s actually quite odd to finish Kick Ass and realise that it’s basically a love letter to all that is good and inspiring about super-heroes, buried beneath masses of profanity, casual carnage and piles of bodies. 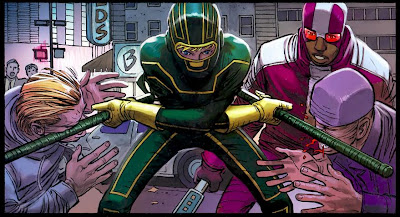 Kick Ass is not for everybody, and everybody who writes it off as stupid, misogynistic, silly, offensive and bigoted have strong arguments for their cases, if that’s the way they want to read it.

But it is the only comic that has made me laugh out loud in the comic store this year, (it was the cover tagline: ‘This issue is dedicated to street-fighting!”). I am an ultra-pacifist in real life, but that doesn’t mean I can’t enjoy a bit of cartoonish ultra-violence in my fiction, and the more grotesque it gets, the funnier it is. This is superhero absurdity, and I’m all about superhero absurdity.

And the way the book refuses to take its foot off the pedal, and just fuckin’ goes for it, still remains completely charming.

There might be a load of absurd superhero carnage, but all the way through the last issue of Kick-Ass 2, the reader is reminded of what superheroes are really all about. They hold the line until reinforcements come, they don’t resist arrest, they don’t hurt cops, they call an ambulance for a fallen foe. Even the people who are trying to stop them know they’ll always follow those rules, and use them to their advantage.

It’s the most blatant plea for the inherent goodness of super-hero comics from Mark Millar in a long time. His early Superman Adventures run betrays his absolute fondness for tights & fights, but it keeps popping up in his comics, no matter how cynical he tries to look. He loves the silly bastards who always do the right thing, and Kick Ass 2 hits that nerve.

Because even though the amateur superheroes in Kick Ass are slightly annoying, incredibly geeky and make matters so much worse until they spiral into a deadly mass brawl in Times Square, they’re trying to do the right thing.

By the end, Kick Ass’ narration is almost pleading with us to accept that there is still a definite place for superheroes, no matter how old they get – “We all just need s little colour in our lives and the certainty of a happy ending, because real life doesn’t always work out like that”. 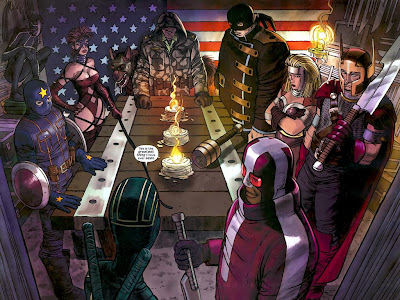 This kind of heart-on-the-sleeve openness can be hard to take, but it's funny, and Millar is still hugely underrated for his pacing, and the comic barrels to a conclusion with real kinetic force.

Millar might not have been able to get away with it if he didn’t have John Romita Jr, because he just might be the best action artist currently working in American comics. Nobody who draws superhero comics can capture the power of an immaculate punch like Romita – just look at his World War Hulk comics, where insanely powerful punches literally set the air on fire around them.

Kick-Ass 2 #7 is 34 pages of mayhem, but under Romita’s pencils, it never gets boring. He captures the clumsiness of two guys flaying away at each other, and the solid and slick moves of the professional killers. And it’s smart - look at how the first punch Kick Ass lays on the Motherfucker is the same shot Hit Girl gets him with on the very first page of the first issue.

Romita has been laying these kind of pencils down for decades now, and his art has evolved out of early stiffness into some brilliantly loose and alive art.

No wonder he still looks like he is 27-years-old in the photo in the back of the comic.

On the last page of Kick Ass 2, it says it’s the end of volume three, which confused me for a while, and I chalked it up to a weird typo, which actually makes Millar’s claim to be part of the Big Three more valid, since the last time anybody made that claim it was Image and their books were riddled with odd typos, but then I realised that Hit Girl was probably going to turn out to be Volume Two, since it apparently takes place between Kick Ass 1 and Kick-Ass 2, so that explained that. 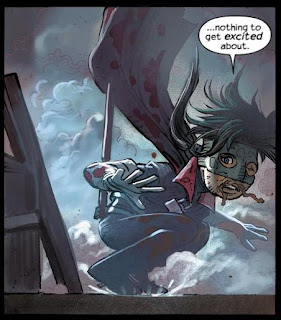 I do have higher-than-average affection for Mark Millar comics. I frequently find them really funny and slickly entertaining, and sometimes they even manage to be unexpectedly moving.

I’m not a total fan – some of his work is just too Millar-ized. I never really liked Wanted (even though I thought that last page was a hoot), was surprised by how badly he handled Spider-Man, and we’re still not allowed to talk about his Judge Dredd comics without the required (and justified) sneering.

But I like more than I dislike, and I liked Kick-Ass a hell of a lot. And not in any ironic so-bad-it’s-good way - I just genuinely enjoy it.

Fortunately, while Kick Ass 2 has finally reached an end, there will be a Hit Girl series starting in June, which should scratch that itch. And I am truly excited about Jupiter’s Children (because I get truly excited about everything Frank Quitely does), and the preview of the Secret Service in the back of Kick Ass #7 has sold me on that series, largely due to some impeccable comic timing on that last page. 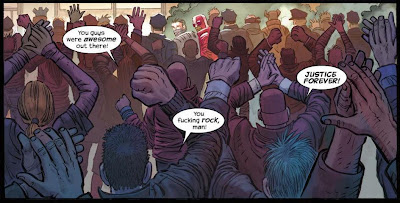 Besides, for all of Mark Millar’s annoyingly loud proclamations, he does genuinely love comics. While he tries to make his stamp on films, the UK newsstand market and the convention business, he shows an un-matched enthusiasm for still putting out his comics.

Which makes Kick-Ass 3 inevitable, especially when the latest series ends on a classic End-Of-Act-Two downer note. I can’t wait for that, because there is always a place in my heart for balls-to-the-walls action comics, and superheroes with a bit of soul.
Posted by Bob Temuka at 9:08 AM