I fell in love with a Video Nasty

They said Video Nasties were bad for you.

Well, what did they know? I was sitting at home recently feeling sick and miserable, so I watched almost eight hours of trailers for films that had been banned in the UK for their sex, violence and general depravity, and I felt bloody great after all that. 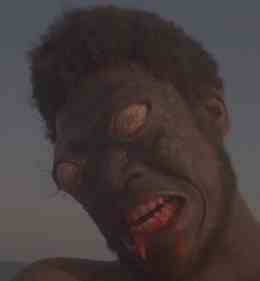 Okay, the bit in the Beast In Heat trailer where the gimp eats the pubic hair made me feel a bit sick. 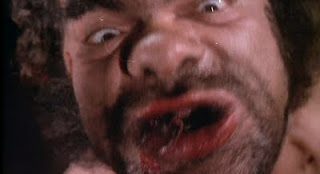 But apart from that, it wasn’t that bad. Laughably bad gore effects are always entertaining and it’s hard for a 21st century mind to get around the idea that people took this shit seriously, and actually thought it had a detrimental effect on society. Politicians and police who led the fight against video nasties showed a worryingly absurd tendency to mix up fact and fiction, parading the fakest of fake gore as proof of real life atrocities.

The UK Video Nasties affair is nothing new in genre fiction, with horror and fantasy becoming a convenient fall guy for society’s ills too many times. It happened in the fifties with all those lovely and wicked EC comics, and because nobody ever learns anything from history, it happened again in the UK in the early eighties.

This was the birth of home video, before the industry became corporatised and driven straight into extinction. There was an insatiable demand for video product, and the producers quickly realised that the more gory and offensive and extreme the cover got, the more it would sell.

Inevitably, these things started leaping over the line of good taste with reckless abandon, and a crackdown by the authorities saw dozens of titles placed on a banned list. These were the Video Nasties. 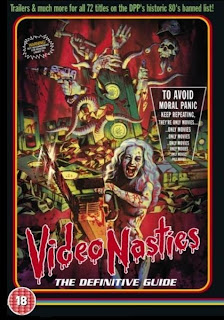 All of these films have long ago been passed into legitimacy, (or faded into irrelevance), but they remain as fascinating as ever. Most of them are dark and dirty films with little to recommend to the average viewer, but for anybody who likes their cinema with the intensity cranked up to 11, and just generally fucked-up, these are a terrific bunch of films.

Video Nasties :The Definitive Guide is a DVD collection of trailers of every single film put on the Video Nasties list, with fine intros from the likes of Kim Newman, Alan Jones, Allan Bryce and the wonderful Dr. Patricia MacCormack & her tattoos. They can usually find something nice to say about every film on the list, even if they really have to stretch the boundaries of ‘interesting’ quite a lot.

It also features a fine documentary by director Jake West, which looks at the story of the video Nasties, speaks to people affected by it and tells the background. Crucially, it also features interviews with the people who brought the ban in, giving their side of the story. (I still think they were horribly, horribly wrong, but it’s worthwhile to see them try and justify it.)

It’s a fascinating story – people actually went to jail for hiring out certain horror films, as a conservative government that had implemented terribly anti-social legislation looked around for convenient scapegoats. The moral backlash against the films was inevitable, but it was never going to last once people realized how silly a lot of these ‘disturbing’ films were. It’s hard to take anything seriously when you see people desperately try to suppress the giggles while hacking up some poor unfortunate victim.

Besides, one of the Video Nasties was the Evil Dead, and if you thought that film was an insidious threat, you’re a bloody moron. 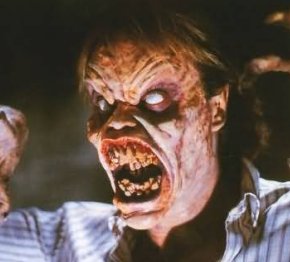 But it’s the trailers that make this collection so brilliant, with those hours and hours of gore, lust and depravity, spread across two DVDs from films made primarily in the l;ate seventies and early eighties.
There is a surprising amount of variety amongst the nasties – they’re not all Italian zombie/cannibal/nazi atrocities. The vast majority are some sort of horror film, but there are also films packed with dubious social realism, films that are flat-out science fiction, films that are that same old Mondo bullshit and uncategorable films like The Witch Who Came From The Sea.

And the horror movies themselves represent all sorts of sub-genres, there are ghost stories and slasher mayhem, monster romps and grim revenge tales.

Some, like the notorious Snuff, are so incompetent and stupid that they are barely watching, and there are some films you can read a lot about, and never, ever feel the urge to see. (I’ve never watched The Last House On The Left, or I Spit On Your Grave, but I could tell you everything that happens in them, and why they are nothing I’m really interested in watching. I also can’t watch Faces of Death, because I find that kind of thing genuinely disturbing.)

Others, particularly in the three-minutes-and-out trailer format, are a lot more interesting. There are splashes of gratuitous art in there among the blood & guts. Moments of intensity that take things just a bit too far, and then take them much, much further. Many people might write off Abel Ferrara’s still-disturbing Driller Killer as utter trash, but it’s trash with a point, buried beneath all that fake blood on the terrifically in-your-face video cover.

And the wonderful thing about watching the trailers to these video nightmares is that they show all the money shots, without the endless clumsy exposition. Terrible acting is reduced to tiny soundbites, and if there is a movie that is too stupid, or perverse, or – worst of all – boring, it doesn’t matter, because another one is coming along in a second. 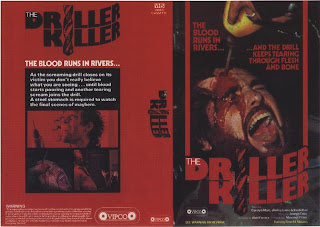 These films are not for everybody. I’m not surprised that I had to literally order this DVD collection in from the other side of the world. This is uncomfortable material for many people, and anybody who finds these kinds of films queasy should stay the hell away from them. Nobody is arguing that these films are good for everyone.

But they are good for me. A bit of fatigue set in around the sixth hour of trailers, but that was largely because many of the introductions couldn’t find much to say beyond “I don’t know why this was banned, and if it wasn’t on the list, nobody in the world would care about it.” But there were still plenty of surprises, and it all ended nicely with the atrocious Zombie Creeping Flesh, which is almost a greatest hits of the video nasties, with cannibalism, stock footage, idiotic zombies, terrible dubbing, blunt social commentary and appalling gore all rolled into one film.

Years ago, I used to watch Zombie Creeping Flesh with a bunch of kids I babysat, and they thought it was the greatest film ever. (And they turned out to be fine adults.) But I’ve still only seen less than a dozen of the nasties on the list, and for most of them, it was footage of stuff I’d read about in magazines like The Dark Side and Fangoria since I was 13. It was occasionally invigorating, and sometimes utterly disappointing, to see these things I’d read about over and over again.

While watching yet another trailer for a film about yet another dubious atrocity, I fell in love with these daft efforts all over again. They are films at the extreme edge of any kind of taste or restraint, where a greasy film-making style smashes into the desire to be more hardcore, more brutal than anything else, standing out from the rest.

There is real beauty in the final shot of The Beyond, or in the ripped-out tongues of Blood Feast, or the floating corpses in Inferno. Cannibal Holocaust’s found footage style was still fresh at that time, Flesh For Frankenstein was artlessly artful and Evil Dead’s claymation disintegrations are still gracefully gory.

I fell in love with a lot of Video Nasties, and they did me no harm.
Posted by Bob Temuka at 12:53 PM