I am not a brave man, and there are loads of things that freak me out - Adam Curtis documentaries; the last 30 seconds of the Blair Witch Project; photographs of ghosts sitting in the back of cars; the possibility of oblivion; people with no faces; insects in my ear.

But there are only two things that genuinely scare me and one of them makes some sense and the other doesn’t make any sense at all.
I’m really, truly scared of zombies and the 1970s.
***
I was born deadset in the middle of the 1970s, one week into 1975. My actual memories of the '70s are the usual preschool fuzz – seeing my little sister for the first time in 1978, watching a kindergarten classmate put a staple through her finger, sitting with my cousin Maria to watch Superman.
But I also recall spending a huge amount of time as a little kid scared out of my fucking mind, because I couldn’t figure out how the world worked.

It’s not right but it’s undeniable – this entire decade makes me feel uneasy, loosens my grip on the world and scares the crap out of me. It wasn’t just inherent dead eyes of the fumetti that bugged me about Fandom Confidential when I saw it in a Comic Kingdom on Saturday, it was the deep existential horror of those clothes and those outdated references and those haircuts and Chuck Fiala’s Mom.

It all scares me on some deep and primal level: the fashions, the big hair, the sideburns, the film stock, Terry Gilliam cartoons and Tomb of Dracula comics.

In fact, every comic from the 1970s bugs me in some indefinable way. There were those clowns building a huge pile of garbage and diamonds in Starlin’s Adam Warlock comics, or the silent despair that could show up in the art of Dave Cockrum – an artist who could capture everything that was wrong with the decade in one costume design. It’s even there in the nice and smooth Curt Swan comics, and his plastic Superman stares out of a metaphysical void into my head.
***
I was weirded out by the strangest things as a child. There was no fear of horror movies, or anything like that.

But that fucking thing with the big eyes from the credits of British kids show Vision On, that still scares me. It’s the title of the show written in cursive and mirrored up to create some kind of horrible creature.

They called it a Grog, and it haunted my nightmares for years, and now I can find it on YouTube in seconds, and the fear hasn’t gone away, it’s just been sitting there for three decades, waiting for me.

Look at it! Look at the horror! 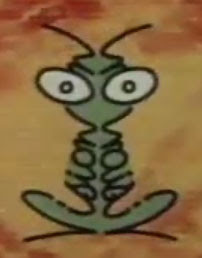 IT IS COMING TO EAT YOUR SOUL! 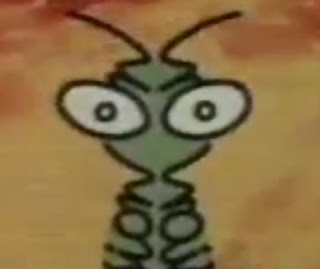 And don’t get me started on the Burbles. Looking for a picture of that Vast Insect God, I stumbled across this YouTube video. There is a bit one minute and seven seconds into it with The Burbles that just filled me with such paralyzing fear, I thought my heart was going to stop. It's those voices coming out of nowhere, the way the door slams, that horrible, horrible music. It was genuinely terrifying.

I showed the wife and she just thought I was fucking mental.

And that’s what I feel any time I watch anything from the 1970s. Scared out of my brains for reasons I can’t explain. I feel mental and stupid. That weird confusion of the world, where everything has a sinister subtext. Even in works of undeniable quality, I am terrified for no good reason.

Now I watch A Clockwork Orange and it makes me nauseous for reasons that have nothing to do with Malcom McDowell’s retching. Malc is also in O Lucky Man, which is often my favourite film of all time, but that scene with the man’s head grafted on to a sheep’s body is one of the most horrific things I’ve ever seen.

***
No wonder Dawn of the Dead is the scariest damn film I’ve ever seen in my entire life.
It wasn’t even the full movie that scared me for the first time – it was the trailer for the film that had been tacked on to the start of a Jewel of the Nile video tape. There was something in that trailer, something in that deeply creepy Goblin music, something in those endless shots of shambling hordes, that spiked the fear part of my brain.
At least you’re supposed to be scared of zombies. That’s the point. Not like the fucking Burbles.
And when I did finally see the whole film, it was absolutely terrifying. It’s mainly those dead eyes, decaying faces and ravenous appetites that make Dawn of the Dead so scary, but I’m creeped out by the whole thing. It’s the decorations in the mall and the peculiar shade of the red that blows out of the back of a zombie’s brain and the turtleneck sweaters on the dead people and the food and those old video games they play at one point and the way they decorate their bolt holes and just about anything.
I still have terrible nightmares about zombie apocalypses every time I watch a decent zombie movie, and the most recent was the night after I watched the last episode of the Walking Dead. I always wake up absolutely shit-scared, and it’s ensured I’ve had a zombie plan ready to go into place when the inevitable apocalypse comes since I was 12. (The key is surviving the first couple of days.)
The Goblin score is a large part of it. It’s not that dull, thudding bass beat, it’s the moaning chorus in the background that really sounds like the whole world is crying out in terror, but doesn’t have the strength to scream.
But I could watch Dawn of the Dead over and over again. Partly because the ending feels me with real hope, and partly because it’s just a fucking good film. It scares the hell out of me still, every time I watch it.

***
The second scariest thing I’ve ever seen was a Hammer House of Horror episode that I was allowed to stay up and watch one night, when I was about four or five. All I can remember about it was that there was a disappearing house, and something to do with a phone-box.
***
And I’ve realized that despite what Roosevelt said, fear is nothing to be afraid of. I like getting freaked out by stuff, I crave the rush of horror and I groove to the dread. You never feel more alive than when you’re scared out of your mind, even if – especially if- you’re scared of something that makes no sense.
I’m not talking about phobias – which are crippling and painful and horrible – but sitting down to watch a BBC kitchen sink drama from 1973 in the dead of night and feeling scared and alone is curiously uplifting.
I still haven’t worked out how the world works, but I have got a lot better at hiding my fear. I never want to lose it completely, because it's so damn thrilling. The '70s were a long time ago, but things from that decade can still affect me in ways I never want to lose.
Posted by Bob Temuka at 11:34 AM