Tyler Durden is such a jerk 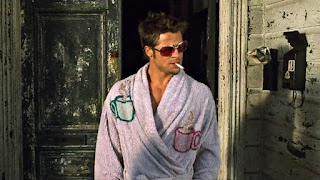 Twenty-something years later, and Fight Club is still fun as fuck, full of weird touches and a unabashed love for the medium it's wallowing in. It's stacked with great performances - Helen Bonham Carter's acting is straight-up seminal, even if nobody seemed to notice it over the grunts of the boys - and that soundtrack is still like nothing else in the universe.

But watching it again for the first time in years the other night, something became clear to me - I am now old and cynical enough to realise how much Tyler is just such a fucking jerk.

He's that guy who was two years older than everybody else in your peer group, who was always shifty and could never be trusted. He wasn't dumb, but just didn't like being told what to do at all, and had a ruthless disregard for their own safety, or the safety of others.

They always had some kind of charm when you struck up conversation with them at a bonfire party under the bridge, and always knew to flatter your mum. And then they got their drivers license first and you nearly died twice when they were driving through controlled intersections before telling them to go fuck themselves.

I knew plenty of guys like that, and some of them are even still alive. I don't really know them anymore, because who needs that kind of toxic drama in your life?

It's not a revelation to say Fight Club has lots of weird lessons, with all the wrong ones always getting picked up by the biggest meatheads in the world (the same kind of mindless thug who thinks its cool to pretend to be the Punisher), but thinking Tyler is a good role model worth watching is a foolish thought.

Although I remain in absolute awe of Pitt's ability to pull off that wardrobe, Tyler is only getting less charming the older I get. Who knows how I'll feel when I'm 90, if space monkeys live that long.