Holy Terror - the latest comic book by Frank Miller - has been greeted with the usual derision from the usual quarters, and a foolhardy few who are willing to admit they actually kinda liked it.

I’m one of those latter fools. It was the most expensive comic I’ve bought all year, but I got what I wanted for that cost. There are points where Holy Terror can be genuinely (and intentionally) offensive, bits where the art degenerates into crazy splashes of paint and mad staring eyes, and parts where the dialogue is absolutely guaranteed to cause cringing in any reader, but I still enjoyed it.

It’s particularly hard to mount a defence for something like Holy Terror, when many of the arguments decrying it are completely right. It can be read as a misogynistic, racist and ideologically dubious piece of work, if that’s the way you want to read it.

I just liked the bits where Natalie Stack kicked a bunch of arseholes in the face, and the parts where the main characters tumbled through acres of negative space. 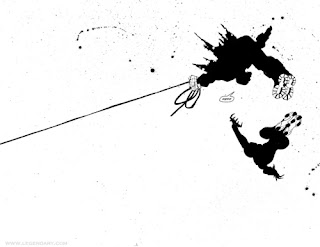 I’ve still got a lot of affection for Miller’s art style. Those stark silhouettes and madmen bouncing around on their own rage. I enjoy the maddeningly random spot colouring which gives certain panels an easy shorthand. I love his sound effects and the way he has characters kiss like they’re teetering on the edge of the universe.

Frank Miller’s line is still energetic and has a kinetic punch that is terribly lacking in the current house styles of the big comic companies. There are all sorts of things going on in one massive paint stroke, and insanely detailed bits of the background, like the dinosaur head that randomly shows up.

There is a weird beauty in the way The Fixer shoots people in the head, sudden circles of negative space appearing where a brain should be, and storms of rain and nails slash across the page. 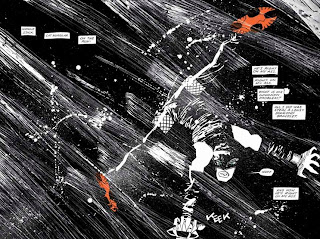 Defending the art is easy – all of that is just a matter of taste. Defending the ideology is a bit more difficult.

But it’s still possible when you take certain ideas into consideration – that you don’t have to agree with a characters point of view to enjoy a story about them, and that important and troubling issues don’t have to be treated with nothing but griml seriousness, and that I’d probably be pissed off if somebody attacked my city too. 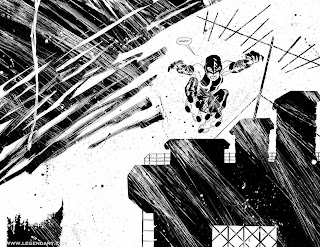 1. “I don’t agree with that.”
I think the idea of an eye for an eye is a barbaric ideology that has no place in the 21st century, but that doesn’t mean I can’t enjoy a rollicking romp of bloody revenge. I’m more genuinely moved by narratives that show a little goddamn compassion, but I can still enjoy Jack Bauer killing and torturing his way through the vaguely ethnic cast lists of Hollywood. In fact, questioning the motives of somebody like 24’s lead character was a major part of that television show’s appeal.

If I had to discard all the movies and books and television and comics that I didn’t politically agree with, I’d be severely limiting my choices. It’s easy to only absorb the media you agree with, but that’s not necessarily a good idea.

I don't agree with The Fixer's methods, but that doesn't mean they can't give a brief and intense visceral thrill.

There is also a worrying tendency in criticism to attribute the actions and motives of significant characters to the true feelings of their authors, which is always a bad idea. Miller might have characters saying the most politically appalling things, but that doesn’t mean Miller feels the same way.

Especially when the book ends with a one-page stinger that might be the whole point of the thing – other than prevent a few more of those blank panels, The Fixer doesn’t do shit in Holy Terror, because Dan Donegal (A hard man, a tough cop) is fucking terrified.

What is Miller saying here? Whatever the hell you think he’s saying. 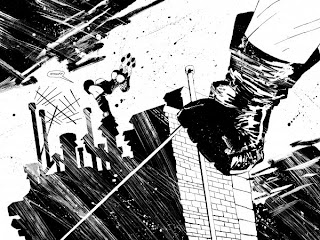 The easiest defense is that Miller is going for a satirical vein, but it’s more than just that. There is satire in here, including some fairly obvious, but hearty, slams on the main character’s point of view, but there is also pure and nasty caricature, complete farce, balls-out action and utter silliness.

The one thing Miller’s superhero work has going for it – the one that is most often sneered at and ridiculed – is their sheer absurdity, but despite what the 1980s keep telling you, that isn’t always a bad thing.

There is no escaping it in Holy Terror - it’s patently absurd to think there is a big supervillain lair beneath New York City, ready to fire out terrorist ninjas and unlimited megadeath, but this is fiction, where anything goes. Absurdity is a valid part of fiction, and the more blatantly ridiculous it all gets, the more I love it.

No, you can’t just go up to your fears and punch them in the mouth (or knife them in the guts), but you can dream about it. We all do that.

Miller’s work has been in the realm of grim absurdity since his first Daredevil comics, which are much funnier than everybody remembers. By the mid-nineties, he was all about the absurd, taking a path through the excesses of Elektra: Assassin into the straightforward and glorious stupidity of Sin City, Hard Boiled and Martha Washington.

Anybody who is surprised by how silly Holy Terror is hasn’t been paying much attention to Miller’s work. There are dozens of super-folk comics that wear their uniforms just a little too tightly, and humourless super-heroes are no fun, but they sure are everywhere. What's wrong with a bit of silliness to counter-balance things like Aquaman's sneering and self-important dismissals? 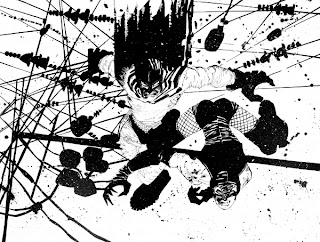 It can’t be denied that the September 11 attacks did something to a lot of Americans, many were shocked enough to go to war in far-off lands, many were angered by the liberties taken in the over-reaction and some just shrugged their way into catatonia.

Some, like Frank Miller, made comics about superheroes slapping around terrorists. It’s rumoured that a lot of The Dark Knight Returns’ energy came from the frustrated and impotent rage Miller had after a New York mugging in the late seventies. Frankly, we got off lightly with Holy Terror, if that’s true, considering his angry instant reaction..

Golden Age comics are cool again, and while that doesn’t make them any less crude or unwittingly offensive, they were born in a crucial period in American history. The very first thing Captain America ever did was punch out Hitler and Superman was soon tossing tanks around, in comics created by young men who were appalled by the inhumanity in Europe.

It’s only fair that a direct artistic descendent of Siegel, Shuster, Kirby, Simon and Eisner – who all wrote and drew crude stories about kicking injustice in the balls – gets his own go at it.

Frank Miller’s home town got attacked by moronic martyrs who think their own idiotic cause is worth any bloodshed, and he wrote and drew a comic about total retribution on these idiots. I can’t say I wouldn’t have done the same thing. 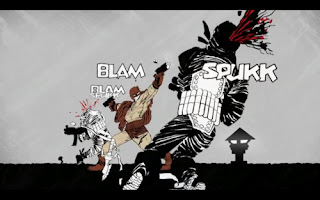 Holy Terror is not for everyone. It is a silly and violent comic, loaded up on its own righteousness. It’s a Frank Miller comic, and I think it’s terrific.
Posted by Bob Temuka at 11:02 AM

Can I just say that even though I've not read Holy Terror yet, you're wrong and it's appalling that you should say the things you have?

Why can't we go back to the moral purity and restraint of The Dark Knight Returns, when I was younger and everything in the world was wonderful?

p.s. Great review! And considerable stones were invested in it too. Huzzah!

Frank Miller is laughing at you and all the other fanboys who ate up Holy Terror and All-Star Batman as he snorts cocaine off of a pair of double-D $700 hooker tits, and thinks about which comic book legend he should next make turn in their grave by raping their body of work for more intentionally rubbush Hollywood abominations.

He can do whatever he likes with my money, Jeff. I got what I wanted from his work and thought it was worth the price.

I still think it's far more likely he would be laughing at anybody who takes this stuff too goddamn seriously.

But Bob, do you not think there's something more than a little troublesome about the fact that the book is a direct attack on Islam? It's not just the people that attacked New York that come in the firing line. I appreciate that you enjoyed it aesthetically, but I think you're possibly being a bit naive if you don't think that there's something very dubious about a piece of ignorant anti-religious claptrap like this. Simply flinging in the word 'Goddamn' doesn't simply make it okay.

Well, it's certainly an attack on the more ignorant aspects of Islam and those who use their ideological beliefs to justify wholesale slaughter, but Miller has had plenty of cracks at other religions during his career. I really don't feel he was picking on several barbaric Islamic beliefs any more than he was ripping into some seriously odious Christian ideas in things like Martha Washington.

If he only ever did book after book where Islamists were the symbol of ultimate evil, it would be impossible to defend, but when it comes to religious idiocy, Miller is a total equal-opportunity hater.

And once again, I'd like to point out that the most pig-ignorant statements about Islam in Holy Terror all come from characters who are violent and dangerous psychopaths. There is no need to condone anything they say.

But what do you think the intent of the book is? In the current political climate?

That's a really good question. I haven't really been reading any interviews Miller has done to support Holy Terror, but I would assume his primary goal would be to get all this stuff out of his head and onto the page, and anybody who gets a visceral thrill out of it is pure bonus. It reads to me like pure therapy.

I certainly don't think anybody would read this book and suddenly think 'OMG! Islams are bad!'. While there will surely be readers out there who think it's an accurate portrayl of the complexities of international terrorism, these people are idiots, so we shouldn't worry about them.

Ultimately, it's just a comic book about angry people getting a totally fictional vengenace (in this regard, it shares the 'GOOD GUYS WIN' wish-fufillment of something like Inglourious Bastards), and I'm a little baffled by the idea that a silly little book like Holy Terror could actually be dangerous, no matter what the political climate is like. It's not going to change anybody's mind.

The thing is I adore Miller's artwork, and am a huge fan of his latter stuff - DK2 is a riot and the latter volumes of Sin City have a thrilling loose kineticism.

I just don't want to buy something that's basically a hate screed. And I don't think it'll change anyone's mind, but I do think it might help fuel some ignorant people's misplaced anger.

But hey, it's nice to read someone with a sLightly different viewpoint on the book other than simply bashing Miller.

Trust me though, you don't want to read/watch any interviews with him. They're depressing.

Holy Moly! You brought it! With money?!
Sounds like Stockholm Syndrome to me.
Methinks that you should have sourced a copy from your local library instead...